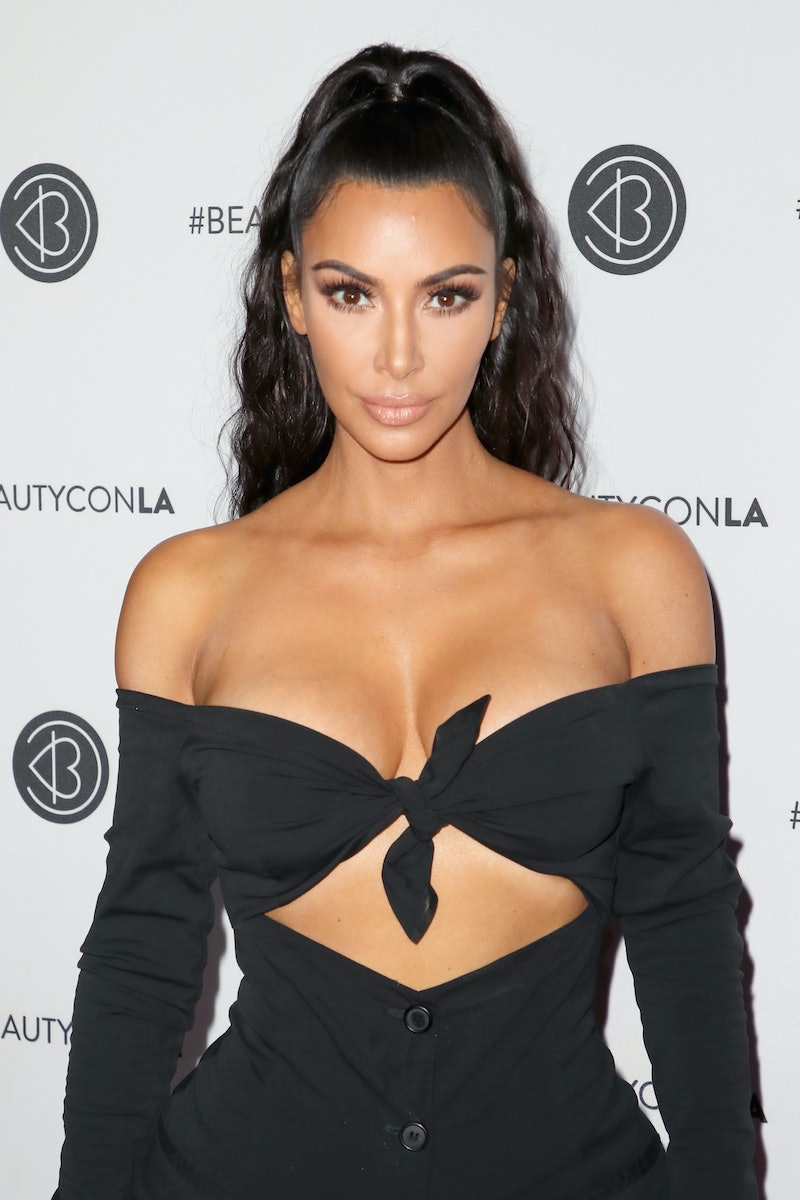 You're about to witness the cutest thing you'll see all day, all thanks to a recent post from Kim Kardashian. On Twitter, Kardashian posted a photo of Saint and Chicago West — and seriously, it may just be the most adorable snap she's posted of her kiddies yet.

On Aug. 7, Kardashian blessed the world with a photo featuring her two youngest children (North West wasn't included in this most recent pic). In her caption for the picture, in which Chicago and Saint are looking off-camera with near-identical expressions, she wrote, "These two are inseparable #Chi #Saint." Honestly, just try and find a cuter photo. Oh, wait, you can't.

This isn't the only time that Chicago and Saint's adorable bond has been front and center recently. In early July, Kardashian's kiddos took the spotlight on her Instagram Story, as The Mirror noted. In one post, the Keeping Up With the Kardashians star wrote, "He loves his sissy." And to make things even more adorable (who knew that was possible?), Saint even shared the sweet nickname he has for his little sister.

In a nod to The Incredibles, he apparently calls her "Jack Jack," since she's the baby of the family. According to The Mirror, Saint obviously goes by "Dash" and his mom got the "Elastigirl" moniker (which leaves Kanye West with Mr. Incredible and North West with Violet). Basically, the West-Kardashian family (and in this particular case, "Dash" and "Jack Jack") is the definition of adorable.

If this isn't enough Saint and Chicago cuteness, the two also posed together in a May snap, where their close relationship was on display. In the photo, the newest addition to the family got a hug from her big brother. Kardashian captured the post with, "Sometimes we all need hugs" along with a heart emoji for good measure.

Kardashian's most recent photo of her youngest children calls to mind one of her previous snaps that featured all three of her kids. On June 9, the reality star posted a selfie that featured her growing family (minus West). The crew was all smiles as they snuggled up together. In her caption, she wrote, "Welcome to the good life," a callback to one of her husband's famous songs (the similarly named "Good Life").

Aside from their West family photos, the cute youngsters also find time to pose alongside their cousins. Most recently, Chicago got to have a little playdate with Khloé Kardashian's daughter, True Thompson. In the pink-filtered photo, two of the newest members of the growing Kardashian fam put their BFF status on full display, which was a joy for any Kardashian fan to see.

The only thing missing from the pic was Kylie Jenner's daughter, Stormi Webster. Seeing the three newest KarJenner additions would probably be a cuteness overload.

If you know Kardashian at all, you would know that you can always count on her to post some of the best and most interesting pics on the internet. And nothing is more evident of that fact than her latest, cutest photo of Chicago and Saint.