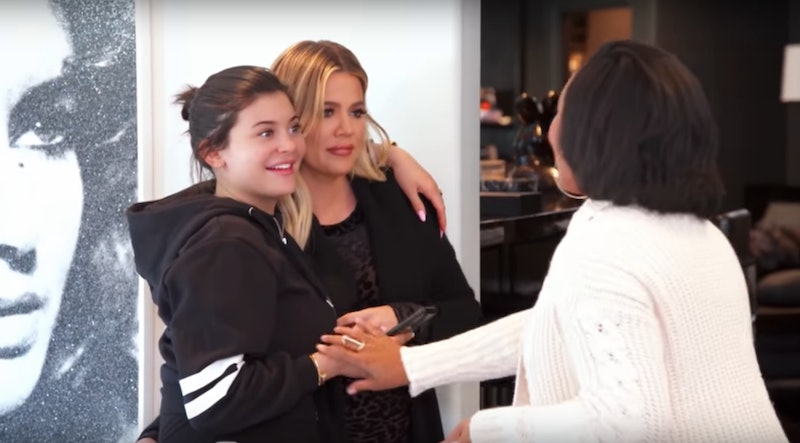 In the months that Kardashian was expecting her third child via surrogate, a lot of the details were kept on the down low. Although she shared some of her excitement for her third kiddo — who we now know as baby Chicago — it seemed like she was really into the idea of keeping that important time in her life to herself. And now that we're seeing everything play out on KUWTK, it's obvious that she did try to keep her surrogate as anonymous as possible, and that even continued when the surrogate made her first appearance on the show.

As the end of the surrogate's pregnancy neared, Kardashian said that she wanted to move her in with her and Kanye West, so that they would be close by when she went into labor. She also mentioned how important it was to her that her family had the chance to get to know her, and when she finally had the chance to meet up with Kris Jenner and Kardashian's sisters, it gave viewers an opportunity to be introduced to her, as well.

Although Kardashian introduced the surrogate as Lorena, that's basically the only identifying information we were given about her. The camera never showed her face, focusing on filming her from behind as she met everyone and then sat down on the couch to talk about her pregnancy. Her voice wasn't edited, and it's not like she was blurred out, so the mystery of it all seemed more natural.

Lorena opened up about being a surrogate, since this wasn't her first rodeo, and she even bonded with Kylie and Khloé, who were also pregnant at the time. It was a really sweet moment between everyone who was there (including Kendall, who's been pretty scarce this season), and Lorena seemed open and ready to answer everyone's questions.

"I like being pregnant," she said. "I know that sounds really weird. The pregnancy itself — it just feels natural, like I'm supposed to do it."

Carrying Chicago wasn't Lorena's first brush with surrogacy. She's done this before, and because of her experience, it sounds like she's gotten this whole thing on lock. When Khloé asked her if it was hard for her to give the baby to its parents at the end of her pregnancy, her answer was so sweet. She said:

"I know from the very beginning this is not my baby. At the end, my joy and my satisfaction is whoever I'm having the baby for. So when the baby comes out they're like, ‘OK, well do you want skin on skin?' I'm like, ‘No, let her go to her mom.' I know what my job is in all of it, you know what I'm saying? It makes me important because I'm like, ‘Wow, I did something so good. This is beautiful. Like I would do this again a thousand more times.'"

It seems like Kardashian really found the perfect person to become part of her life in such an important and personal way — and she was excited to be able to introduce Lorena to her her family. While the episode was airing, she tweeted:

Now that Chicago is finally here, it's awesome to find out more about the woman who carried her. It was the perfect way to cap off this season of KUWTK, and it's going to be so exciting to see Kardashian as a mother of three when the show returns.