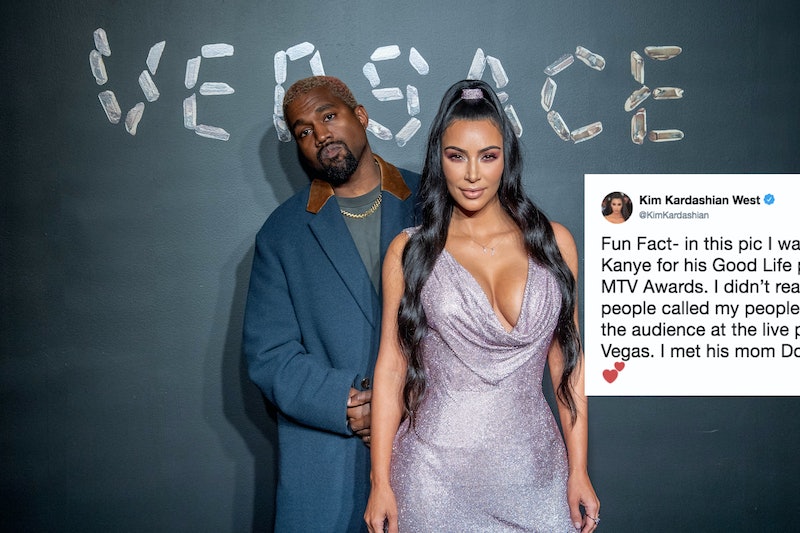 It's been more than four years since Kim Kardashian and Kanye West tied the knot, but their history goes back even further than that — in fact, it goes all the way back to the 2007 MTV Video Music Awards. When she replied to a fan's tweet on Wednesday, Kardashian shared the backstory behind her 2000s Juicy Couture tracksuit, and as it turns out, it's actually part of a sweet moment that happened when she first met West.

It all started when a fan tweeted Kardashian a photo of herself wearing the bright pink velvet tracksuit that was once so popular, along with the equally as popular multicolored Louis Vuitton bag on her shoulder. Together, this outfit could practically represent early 2000s fashion all by itself, so it's no wonder a fan wanted to bring it to Kardashian's attention. It's so different from something she'd wear today, but still so iconic for the time.

"I'd love to see Kim bring back Juicy Couture sweatsuits and that LV multicolor bag," the fan tweeted.

And when Kardashian responded, she shared a piece of intel with her followers: When that photo was taken, she was on her way to meet West for the very first time. She wrote,

"Fun Fact- in this pic I was on my way to meet Kanye for his 'Good Life' performance for the MTV Awards. I didn’t really know him but his people called my people lol & I was a girl in the audience at the live performance in Vegas. I met his mom Donda this same night."

One of the major downsides to being a celebrity has to be the fact that you're followed by cameras when you're out in public, but for Kardashian, it also meant that this moment — when she is actually on her way to meet who would eventually be her husband for the first time — was captured for her.

And being that West performed "Good Life" at the 2007 VMAs, it makes sense that's when the photo was taken. Thanks to a video shared on YouTube, we can all look back on that performance now... and debate whether the girl to the left at 12 seconds is Kardashian. It's hard to say if it's her for sure, since the video quality means that woman is a bit blurry, but she does have the long dark hair that Kardashian had at the time. Could it be her?

Even if it's not her, it's pretty cool that she and West have such a well-documented history of their relationship. One day, their kids will probably think this is pretty cool (but the jury's still out on how they'll feel about that tracksuit).

And speaking of said tracksuit? Kardashian said in a later tweet that she held onto it, so if she wanted to bring that look back, she definitely could. "P.S. I still have this sweatsuit and this bag," she wrote.

The tracksuit may end up remaining simply a relic of Kardashian's past, but knowing that there's a story behind the day she was photographed wearing it is actually pretty cool. Let's just cross our fingers and hope that North tries it on someday so the story can truly come full circle.