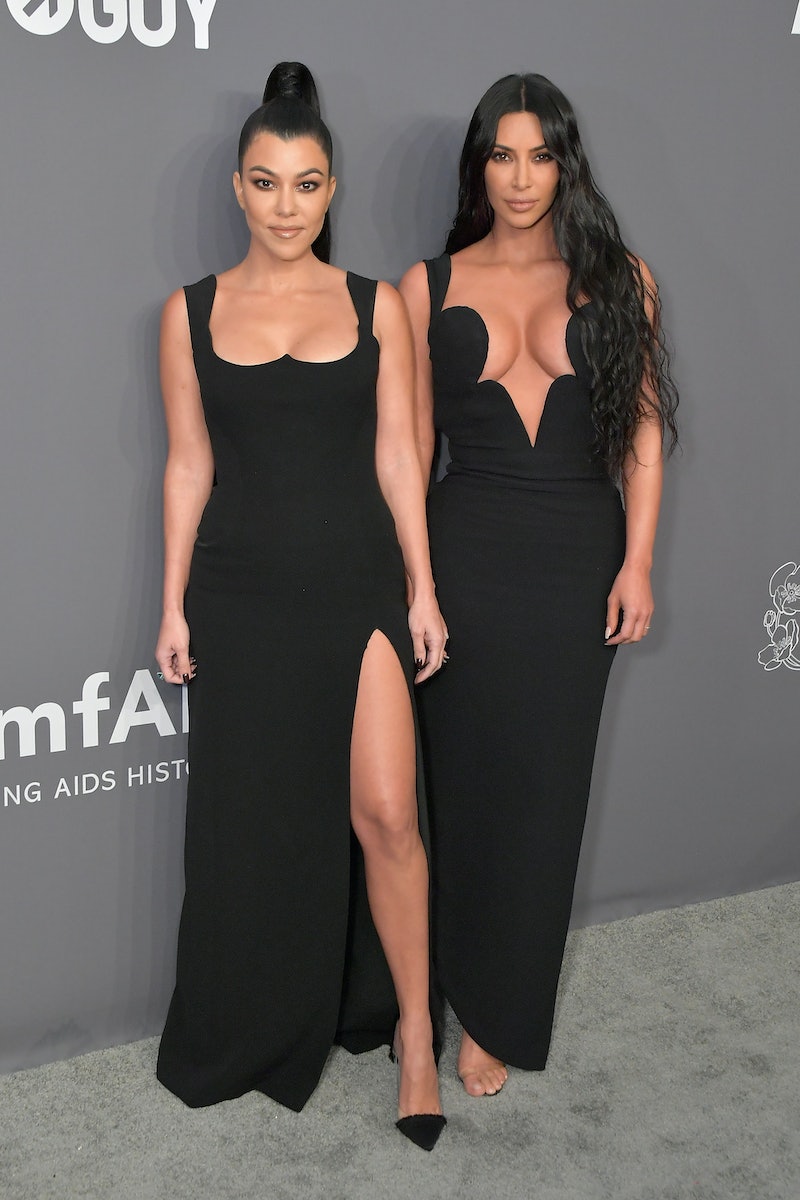 The Kardashian siblings are no stranger to familial drama, but they also get over things fairly quickly. Case in point: Kim and Kourtney Kardashian aren't fighting anymore after their feud over Kourtney allegedly copying Kim's style. Kim confirmed as much on Twitter, writing, "Fighting is over don’t worry," alongside a winky emoji. Before the feud ended, though, it got pretty nasty.

Kim accused Kourtney of stealing her style and having her stylist pull the same looks from the same designers. Kourtney claimed that her stylist pulls lots of looks, but that Kourtney sends anything back that looks too much like something Kim would wear, because they have very different styles. Honestly, the fight was pretty dumb, but it was about more than just clothes, as Kourtney tweeted during Sunday's Sept. 15 episode.

"Wait [I wasn't upset because of] emotional distress about turning 40! I don't feel seen and heard!" Kourtney said on Twitter after a scene where Kim blamed Kourtney's behavior on her impending birthday. However, Kourtney was admittedly struggling with the idea of being the center of attention on her birthday and was dealing with anxiety around it all, so she tweeted that all of that plus the fight made everything harder. "A very overwhelming time for me ,not about turning a year older," Kourtney tweeted. "There's an intense pressure put on birthdays, especially big ones & I hate being the center of attention. This fight with @KimKardashian made it so much worse."

Fortunately, the sisters resolved the problem before Kourtney's big day. Kim put aside her frustrations to help her sister have a great party, and she even loaned Kourtney a dress to wear. The mesh and chainmail black Versace piece had originally been sent to Kim to wear, but she gave it to Kourtney to wear on her birthday instead.

"You know Kim loves Kourtney when she gifts her a vintage Versace dress," a fan tweeted. "BIG FACTS," Kim responded.

Kim also added that, in addition to their fighting being over as of now, the whole family tries to move past drama quickly. Another fan tweeted, "Kim giving Kourtney the Versace dress... so beautiful that they don't let anything get between them or dwell on it too long... life is too short." Kim responded to that tweet, "We try not to dwell."

Kim and Kourtney have had plenty of arguments on the show before. So have Kourtney and Khloe and Khloe and Kim and all of them and Kris Jenner, etc. The Kardashian-Jenners are family, and families fight. But, at the end of the day, they always work through things. Just as Kourtney and Kim moved past Kim saying Kourtney was "the least interesting to look at," they moved past this alleged style stealing too. Also, as a fun side note, Kourtney's party had alcohol bottles with "most interesting to look at," written on them.

So, not only do they move on from their battles, they turn them into jokes to laugh at later. And that's how you know they're likely always gonna be OK, no matter what their current fight may be about.

More like this
Twitter Thinks This Is The Real Reason Zach Sent Christina Home On 'The Bachelor'
By Grace Wehniainen
The Bachelor’s Greer Blitzer Apologized For “Uneducated, Ignorant” Past Tweets
By Brad Witter
Twitter Has Renamed Ekin-Su After *That* 'Dancing On Ice' Performance
By Sophie McEvoy
We Finally Have Some Answers To How Heather Gay Got A Black Eye On 'RHOSLC'
By Samantha Rollins
Get Even More From Bustle — Sign Up For The Newsletter
From hair trends to relationship advice, our daily newsletter has everything you need to sound like a person who’s on TikTok, even if you aren’t.