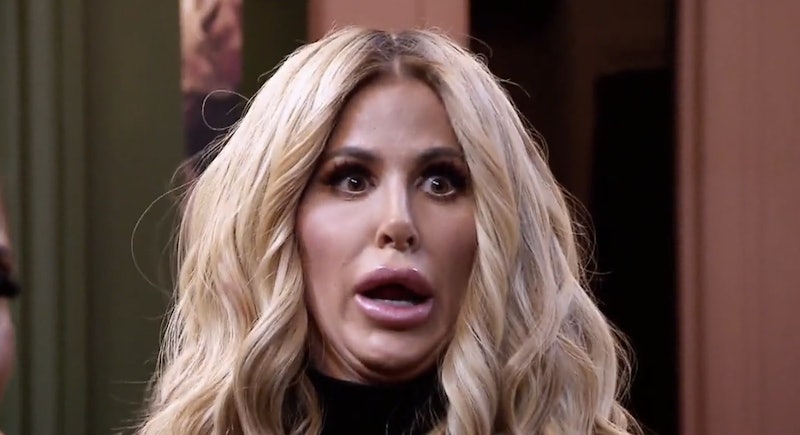 Don't call it a comeback, but Our Lady of the Blond Wigs herself, Kim Zolciak-Biermann is returning to The Real Housewives of Atlanta, and I'm going to tell you right now that you are not ready. Or maybe you're ready, but the good women of Atlanta are not. Every one of the current Housewives has already overlapped for at least one season with Zolciak-Biermann, during her first stint on the show from Seasons 1 through 5. But she's been away a long time, doing her own show and paring down on effs to give, and she seems to be back with a vengeance. That's just according to the trailer for the second half of RHOA Season 9, which was released on Wednesday.

Our last sighting of the be-wigged drama factory was early in Season 5, when she put her foot down on attending a group vacation and unceremoniously left the show to strike out on her own with Don't Be Tardy. That show went on to have five successful seasons, with a potential for more, but she doesn't have much of a learning curve coming back — at least when it comes to stirring up controversy.

In the preview clip, during a party for the opening of Chateau Shereé, Kenya Moore tries to throw her weight around a little bit, observing to Zolciak-Bermann, “Your husband doesn’t have a job right now, so worry about that." But Zolciak-Biermann has a jaw-dropping retort ready, coming right back at her with, "B*tch, you want to be me. You want to have a baby, you can’t. You want to have a man, you f*cking don’t. Bye."

Ummmmmm... I am not OK after hearing that, and it didn't even involve me. Even if Zolciak-Biermann is only in one episode — the length of her visit hasn't yet been confirmed by Bravo — this season of RHOA is fixing to get crazy fast.

And that's not even taking into account the rest of the trailer, which has the requisite screaming, insults, threats of violence, romantic reunions, and threats of divorce. I'm already exhausted, and we aren't even getting started. No wonder Zolciak-Biermann stayed away as long as she did: everybody needed to save up their energy for her return. You can watch the trailer on Bravo.