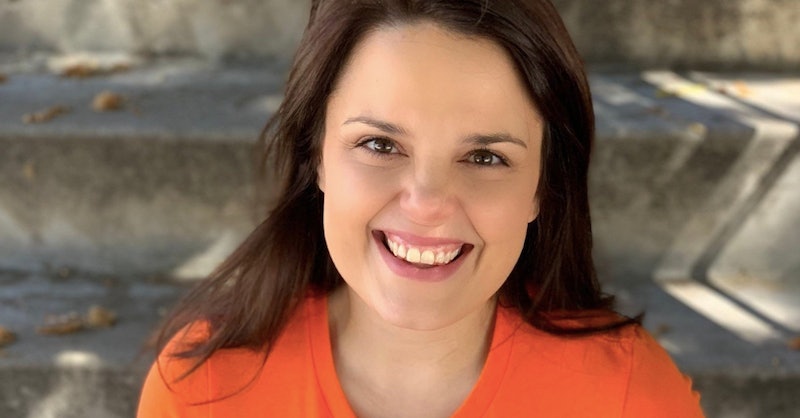 It’s been just over two decades since creepy canon was gifted with Disney’s Halloweentown. If your spooky nostalgia cannot be sated by repeated viewings of the 1998 Halloween classic alone, perhaps your Halloween heart will be filled by this good and ghoulish news: Halloweentown’s Kimberly J. Brown has an Etsy shop called Craftily Creative that’s filled with Halloweentown-themed ware. Brown spoke to Bustle about Craftily Creative, what inspired her to start the shop, and what the fan reaction has been like.

“I started the shop about 5 years ago with my good friend Liz because we loved crafting together on the weekends and thought we’d share some of our projects,” Brown tells Bustle over email. “It started with gift tags, greeting cards, and custom paintings with different quotes, etc. Slowly people started requesting different quotes from Halloweentown on painted signs so we started carrying them in the shop.” Some of the first Halloweentown pieces she created incorporated the well-known and fan-loved quote from the movie: “Being normal is vastly overrated.”

After success on other formats, Brown turned the quote into a graphic tee. On Etsy, Brown noted that this line, originally said by Debbie Reynolds' character Grandma Aggie, is the one fans most often quote. “From there, we’d listen to feedback from fans about what they’d like to see for new designs and incorporated some other fun ones.” Craftily Creative currently has 35 items available to buy, many of which feature designs and quotes Halloweentown fans will be particularly fond of.

Brown says that some of the shop’s tees have become Etsy BestSellers, with the products being denoted with a “Bestseller badge” for their popularity among shoppers. This year, Craftily Creative released what is sure to be another bestseller: the “Halloween is cool” graphic tee. “It was probably our number #1 suggested design over the past year,” Brown says. “People come up on the street and have me say it to them because they love it from the first Halloweentown film.” The black tee features orange hand-lettering written by Brown herself. However, if you're hoping to hear "Marnie" say the quote, you'll have to settle for sporting the tee and saying it yourself.

Earlier this month, Brown spoke with Seventeen.com about Halloweentown and what the movie has meant to her since it came out. In particular, Brown said working with Debbie Reynolds taught her a lot about how to be both a good actor and just a good person. Brown remembers Reynolds taking time to say hi to fans outside the set. “It was just somebody who was so successful and so famous and legendary and everything who just never forgot how important it was to connect with people and say hi and enjoy being able to make them happy,” Brown told Seventeen.com. “That’s something that has always stuck with me, ever since then.”

With the success of Craftily Creative and the evergreen love of Halloweentown, Brown has gotten a lot of love well-deserved from fans. “Now we get suggestions all the time and the sweetest notes from fans thanking us for making our stuff and telling us what the movies mean to them.” Brown continues, “I have really loved getting to create with the fans over the years in our shared love for the movies. It’s also a way for me to kind of pay homage to the fans and these films that have meant so much to me and another avenue for me to keep creating when I’m not filming and working so we’ll keep creating as long as the fans will have us.”

In addition to her Etsy shop, Brown has a YouTube channel where she often answers fan questions about Halloweentown and its sequels. If you’re planning on signing up for Disney+, you’ll be able to watch Halloweentown starting Nov. 12. In the meantime, you’ll just have to get your Halloweentown fill by sporting your “Halloween is cool” tea and marathon-watching Brown’s YouTube videos.

More like this
15 Genius Storage Solutions For Your Next Bathroom Refresh
By Emma Garza
17 Creative Bridal Shower Gift Ideas For Any Type Of Bride
By Marilyn La Jeunesse
Here’s Your Daily Horoscope For August 8, 2022
By Mecca Woods
3 August 2022 Full Moon Manifestations
By Brittany Beringer
Get Even More From Bustle — Sign Up For The Newsletter