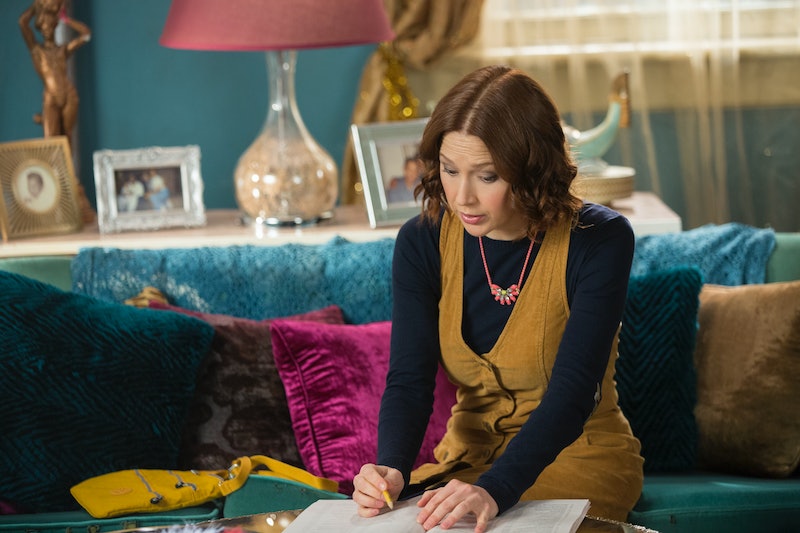 Kimmy Schmidt was robbed of 15 years of her life given the fact that she was kidnapped and held in a bunker by Reverend Richard Wayne Gary Wayne. And the progression of the show has shown Kimmy adapting to life in the real world, getting a job, and getting her GED. Hooray! Now, Kimmy wants a career on Unbreakable Kimmy Schmidt, but as she realizes, college could be a good idea first. Spoilers for Episodes 1-6 of Unbreakable Kimmy Schmidt ahead!

Under the guidance of Lillian, Kimmy takes a career aptitude test and discovers that she would be a really good crossing guard for a school. Her first choice was really a person who brushes a horse’s mane, but crossing guard, she decides, isn’t bad either! So Kimmy and Jacqueline look at community colleges for Kimmy (Jacqueline already went to Trump University — “Go Pricks!” as she says), and she has one all picked out when she meets Daveed Diggs of Hamilton fame. Well, she meets a character played by Daveed Diggs — a student named Perry. He tells her that he is on the late track like she is — he took care of an ailing family member, got into community college, and is transferring to Columbia University the next semester. He also tells Kimmy that she can be more than a crossing guard, which is nice (and true).

Soon after, Kimmy joins TaskRabbit to make a few bucks, and she’s called to a dorm at Columbia to put together some furniture. Behind door number one is… Xanthippe, Jacqueline’s stepdaughter! Long story short, Xan’s crew-rowing roommates discover that Kimmy is amazing at rowing, mostly because she had to turn that crank in the bunker for 15 years straight, and Kimmy gets a full ride to Columbia. So now Kimmy is going to college! She may not know what she wants to do with the rest of her life, but she’s getting one hell of a free education to get there. Oh, and Daveed Diggs is there too, so sign me up.