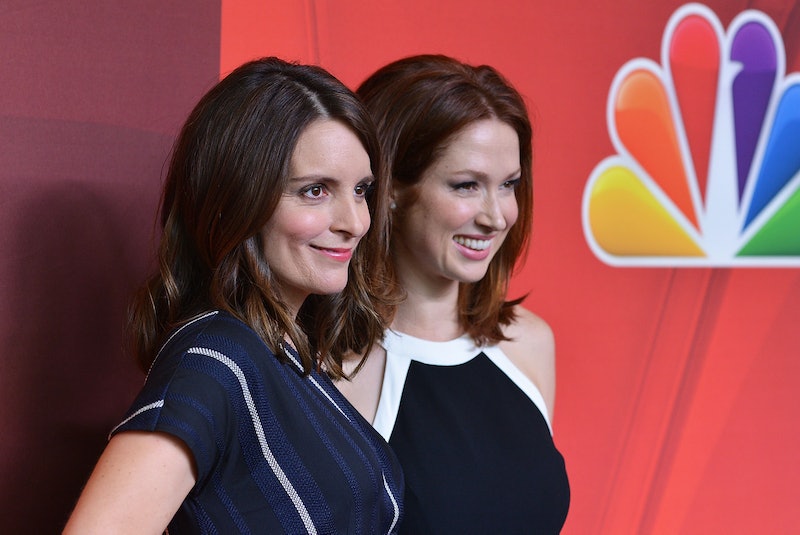 We're all really excited for Unbreakable Kimmy Schmidt , yes? I mean, that's like asking if you're looking forward to breathing air tomorrow. The Tina Fey/Robert Carlock comedy set to air on NBC this fall is high on our must-see list. And after reading some facts about the series from its star Ellie Kemper, we're even more intrigued.

There's heaps of potential in the premise of the show, which follows Kemper's Kimmy after she's rescued from 15 years of cult life. Per the series description she's "armed with just a backpack, light-up sneakers, a couple way-past-due library books and a big wad of rescue-fund cash, she's ready to take on New York City." Using her optimistic spirit to really live and take control for the first time in her life, Kimmy's own start-over feels relatable to even people who haven't, say, experienced the sheltered existence of cult life. So naturally, we also have a bit of a wishlist because this is the Internet and also what else are people supposed to write about if not speculation, eh?

WISH: Kimmy Should Be Naïve But Strong

It's easy to want to make female characters too capable and too strong given how often they're portrayed as one dimensional male counterparts, but like Liz Lemon before her, Kimmy shouldn't have it all together. Nor should she think that she does — realism, folks! She clearly must have strength to hold onto cult-ish convictions, so don't make her a total mess. Just, you know, a regular half-mess. Like the rest of us!

FACT: The Show Will Be About Starting Over

"She was able to survive these 15 years because there is a resilience and fierceness that allows her to," Kemper told People at the Del Close Marathon/improv festival in New York City. "And while she is naive and wide-eyed, and sort of delighted to be back in the world again, she also won't be pushed around or told no."

WISH: The Other Cast of Characters Should Be Exactly That

...Which is to say, total characters. Listen, New York City is filled with 'em (it's part of the reason I was drawn to living there years ago). Considering Kimmy herself is likely to be a bit of an outlier on that front given her cultish affinities, she'd do well to surround herself with folks that are as equally loving but off-kilter. Birds of a feather as they say, right? Diversity: the spice of life, you guys!

The inclusion of Tituss Burgess (whom you may remember from a few particularly hilarious 30 Rock moments, see below) speaks to this but we're dying to know more: who are the other weirdos that have found themselves pulled into Kimmy's orbit? And how does Jane Krakowski fit into it all?

FACT: The Show's Original Title Was an Homage to Antoine Dodson (...Really)

For those of you who didn't know, the series original title was decidedly less, uh, obvious. In fact it was originally called Tooken, a nod to Dodson's viral video where he said people were taken and sounded a heck of a lot like "tooken."

"I loved that title, Tooken," Kemper said. "I was sad to see it go, but Unbreakable Kimmy Schmidt is also an amazing title, it's just longer."

WISH: We Need to Know How She Ended Up in a Cult

Is there anything more interesting than to see how seemingly ordinary people end up in extraordinary situations? No — and it's the perfect place for a bit of absurdist silliness. And ending up in a cult is surely a situation rife with possibilities. So we're dying to know: how in the world did Kimmy Schmidt end up in a cult?

FACT: Ellie Kemper is Fascinated By Cults, Too

Just like most of us out there, Kemper is utterly transfixed by the power cults seem to have over people, and this project is clearly a great excuse to indulge in that. "I will be doing some cult research over the summer because it is fascinating," she said.

WISH: ...No Need to Constantly Shit on Religion, Though

Listen, we're not exactly spiritual believers, but ragging on religion all the time is just sort of, I don't know, old at this point? While we strongly urge the show to point out and highlight the absurdity of organized religion and cultish beliefs, relying on that for humor too much would be a serious mistake. But we know Fey and Carlock are smarter than all that — so we're really more excited than anything else.