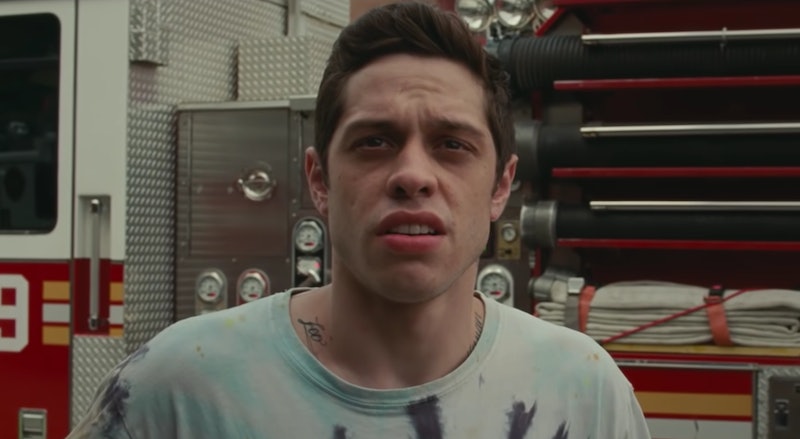 Originally slated for a major theatrical release, Pete Davidson and Judd Apatow's King of Staten Island will instead be making the rounds via on demand video on June 12. Audiences looking to tune in will be treated to more than just a touching story about a young Staten Island man dealing with grief while coming of age at the age of 25. It's also a story partially about Davidson himself, since King of Staten Island is loosely based on a true story from Davidson's own personal life. But that said, it's decidedly not autobiographical.

On a more general level, King of Staten Island is about Scott (Davidson) and his struggle to find direction and meaning in his life while the rest of his family grows up and gets on without him. His sister, Claire (Maude Apatow), is graduating from high school and moving on to college, while his mother, Margie (Marisa Tomei), continuously feels pressure to get Scott up and out of the house to figure himself out. She, too, is looking to move on in life in the years following the death of her husband and Scott and Claire's father, who died while working as a firefighter during 9/11. In fact, it's her choice of a new beau that kicks up Scott's feelings once again, as she begins to date Ray (Bill Burr), another firefighter.

As illustrated in the trailer, Scott resents the fact that his father was a firefighter, and blames his death on his career. It's clear that Scott grapples with grief over his death. And it's in here that we find poignant parallels to real life: Davidson's own father was a firefighter who also died during the 9/11 attack. As Davidson explained to the New York Times: "Judd [Apatow] was like, what’s the real story? I was like, I have never really been able to get over my dad passing. Telling that story — filming it and digging deep and being in uncomfortable areas that I have avoided for so long, I think that not only helped the movie, but it helped me as a person."

Davidson and Apatow continued, explaining how Davidson's relationship to his father and his father's death were central to the film, with Davidson saying, "We open the movie with a suicide attempt and then making fun of my dead dad within minutes," while Apatow replied, "What I liked about that scene was, Pete has convinced all his friends that he’s over it, when clearly he’s not over it at all. You understand immediately what his issue is."

In a featurette focused on Davidson and his connection to the film, Apatow shed more light on the inspirations and motivations behind King of Staten Island's creation.

Apatow said, "We decided that [King of Staten Island] could be completely fictional, but it’s an imagining of what Pete’s life would have been if he didn’t find comedy and he dreams of being a tattoo artist." Speaking on a personal level, Davidson said, "The movie is like my love letter to my mom and trying to end that part of my life. I feel like we finally got to a place where we could finally let go a little bit."