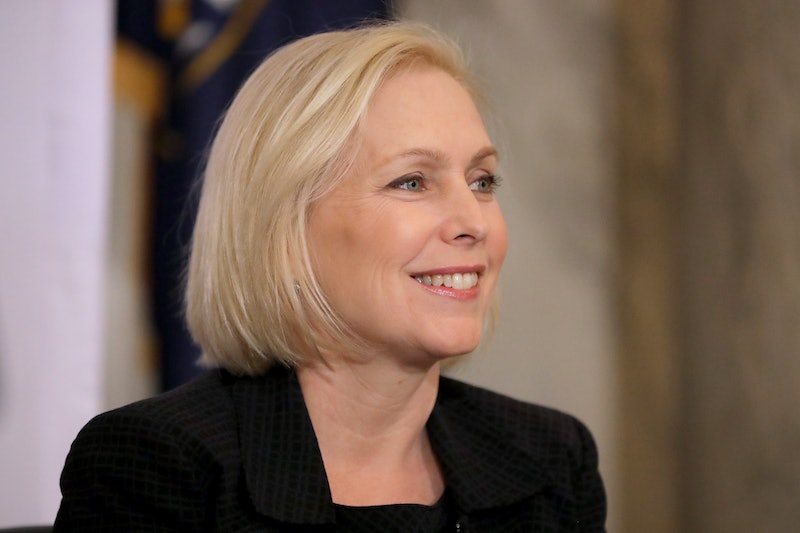 In an interview that aired on CNN Saturday night, Sen. Kirsten Gillibrand discussed potential 2020 Democratic presidential nominees, and said that she was concerned about the lack of diversity among the current pool of would-be candidates. Her concerns come as the senator has openly shared that she, herself, is also considering throwing her name in the ring for the next presidential election.

During the interview, CNN's Van Jones asked Gillibrand if she was concerned about the list of potential Democratic candidates, "the top three being white guys," according to Newsweek. Gillibrand said that she was.

“I aspire for our country to recognize the beauty of our diversity at some point in the future and I hope someday we have a woman president," Gillibrand said, adding that "a more inclusive America is a stronger America," according to CNN.

As for Gillibrand's own potential run, she told CNN that she was "definitely thinking about it, of course." She said that she has been discussing the idea of a potential campaign with her husband and her children, and told Jones that she would be making a decision soon. She explained that the choice had a lot to do with her personal faith and morals.

"This is sort of where my faith drives me," Gillibrand said, according to CNN. "I do believe in these moments of great darkness — of great pain, of great suffering, of great division, of great hatred — that all of us are called to do something ... to restore what is good in our world. And I feel very called at this moment to fight as hard as I possibly can to restore that."

This is not the first time that Gillibrand has addressed the idea of a potential 2020 run. In early November of this year, she told Stephen Colbert that whether she would run was "an important question." She explained, similarly:

I believe it is a moral question for me ... And as I've traveled across my state, across this country for all these candidates, I've seen the hatred and division that President Trump has put out into our country and it has called me to fight as hard as I possibly can to restore the moral compass of this country.

Although Gillibrand is championing the idea of a woman president, her egalitarian ideals have not always gone over so well among Republicans, and people of the internet. Gillibrand received pushback earlier this month, for example, for tweeting out that "Our future is: Female, Intersectional, Powered by our belief in one another. And we’re just getting started."

She responded to that pushback in her CNN interview, arguing that the critics "just don't get it," according to CNN. "This just means please include the ladies in the future, because they're not really included today," she said.

While Gillibrand's decision about 2020 may not come for a little while longer, the senator has made clear that she is definitely thinking about a run. What she ultimately chooses to do for now is to wait and see.