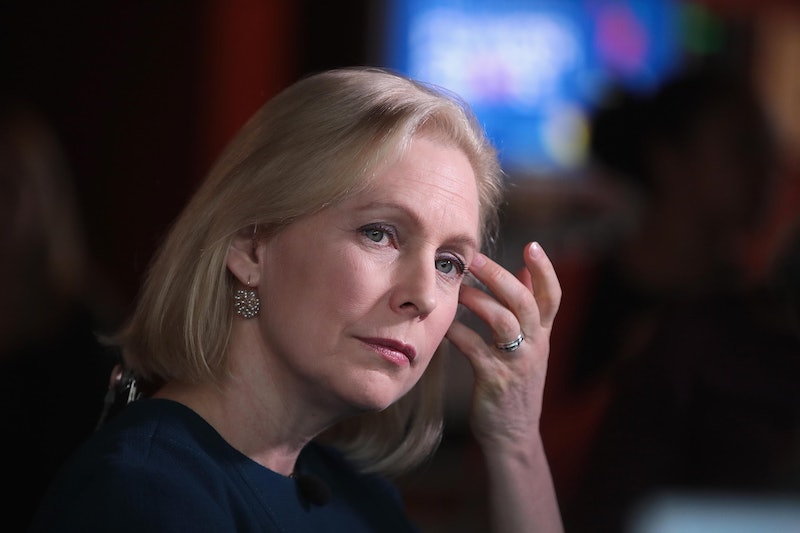 On Tuesday, Democratic presidential candidate Kirsten Gillibrand promised to nominate judges who will uphold Roe if she is elected in 2020. Her announcement, which came by way of a Medium post, acknowledged that the move was unusual, given that presidential candidates generally promote efforts to "preserve the impartiality of our judiciary." But Gillibrand argued that those norms have changed in recent years, and vowed to fight to protect access to reproductive rights in the courts.

"Women deserve a president who understands the real stakes of this fight for the judiciary," Gillibrand wrote. "President Trump is appointing circuit court judges at a record pace, not to mention making two Supreme Court appointments. The impact of those appointments on Americans  —  and on reproductive rights in this country  —  will extend far beyond the end of his presidency. We have to fight back."

Gillibrand bolstered her point by highlighting the wave of anti-abortion legislation that has been introduced at the state level in the last several months. (Notably, around the time of her announcement Tuesday morning, Georgia Gov. Brian Kemp signed a six-week abortion ban into law.)

"It’s all part of one coordinated assault by Republicans who hope to overturn Roe v. Wade as soon as this year," Gillibrand wrote. "And make no mistake: That is the end goal."

The senator pointed to events leading up to the confirmation of Supreme Court Justices Neil Gorsuch and Brett Kavanaugh. Back in 2016, when President Obama nominated Merrick Garland to the Supreme Court, Senate Republicans refused to hold confirmation proceedings for him. At the time, Senate Majority Leader Mitch McConnell argued that it was inappropriate to confirm a judge during a presidential election year, NPR reports. This ultimately paved the way for Gorsuch's nomination soon after President Trump was elected.

In her Tuesday statement, Gillibrand said that, in doing so, "McConnell obstructed the nomination process and stole a Supreme Court seat."

Gillibrand also pointed to Kavanaugh's contentious confirmation process, during which he was accused of sexually assaulting several women when he was younger. (Kavanaugh repeatedly and vehemently denied those allegations. “The truth is, I’ve never sexually assaulted anyone, in high school or otherwise,” he said in an interview with Fox at the time.)

"The decision about if and when to start a family should be made by a woman and her doctor  —  not Republican legislators, not Brett Kavanaugh and certainly not Donald Trump," Gillibrand wrote in her statement.

She went on to promise that, if she were elected, she would also reverse a recent rule that bars Title X funding from going to clinics that provide abortion referrals or care. Critics have referred to the changes as a "domestic gag rule."

"I have always stood up to protect women’s access to safe and legal abortion, birth control and health care at Planned Parenthood," Gillibrand wrote. "I’ve vowed to overturn President Trump’s domestic gag rule —  which prevents doctors from giving their patients information about the full range of reproductive health care — on day one of my presidency."

Although the 2020 election is still pretty far off, campaign season is well underway. The Democratic primary debates begin next month, and many candidates — like Gillibrand in her Tuesday proposal — have started introducing bold plans to help themselves stand out in an already crowded race.