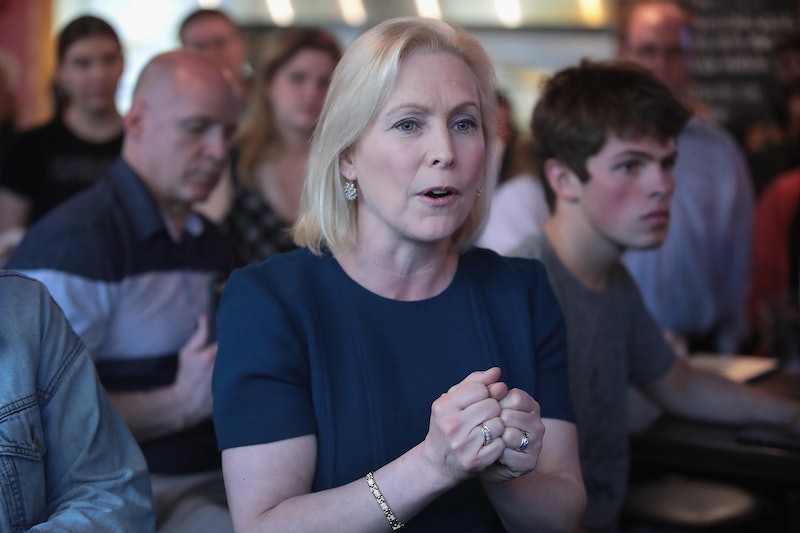 On Wednesday, a New York senator running for president released a comprehensive plan for reforming America's marijuana laws. As detailed in a Medium post by the Democratic presidential candidate, Kirsten Gillibrand's plan would legalize weed nationwide and make it cheaper for some people — namely, for people with health insurance seeking medical marijuana.

"Millions of Americans seek medical marijuana to treat chronic or severe pain — often in an effort to avoid prescription opioids — but access is limited by insurance coverage and availability of medical marijuana dispensaries, even in states where medical marijuana is legal," Gillibrand writes. "We should be expanding patients’ access to treatment they need, especially when it helps reduce addiction to dangerous medications."

As such, Gillibrand's proposal would require that all health insurance plans in America cover medical marijuana treatment. This would include government-funded health plans like Medicare, Medicaid and those that veterans receive from the VA, she wrote in her Medium post.

This is just one component of Gillibrand's marijuana reform plan. She also wants to de-schedule marijuana as a controlled substance, which would make cannabis and its primary psychoactive element, tetrahydrocannabinol (THC), legal at the federal level, and expunge all non-violent marijuana convictions. Additionally, Gillibrand would invest in medical marijuana research, tax recreational marijuana, create a process for ensuring that marijuana production is safe, and provide various forms of assistance to communities hurt by the war on drugs.

"America’s federal prohibition of marijuana needs to end now, and it will be a top priority of my presidency," Gillibrand writes. "The unfair enforcement of our current marijuana laws is a continuation of the institutional racism that has defined our criminal justice system for decades. This vestige of the War on Drugs has irreparably harmed too many lives and communities — predominantly black and brown ones."

There are some differences between the two plans, however. Unlike Gillibrand's proposal, the Marijuana Justice Act wouldn't require that health insurance plans cover medical marijuana, nor would it establish a national standardized process for ensuring safe production of marijuana. Likewise, the Marijuana Justice Act would incentivize states with restrictive marijuana laws to change their policies by leveraging state funds, an approach Gillibrand's proposal doesn't mention.

That said, Gillibrand did say that America must "take steps to make things right for those who’ve already been affected" by mass incarceration. Moreover, the description she released Wednesday was only a general summary of her proposals, not a detailed policy document, so it could change or be expanded upon in the future.

"Nothing proposed today can ever undo the devastating harm done to generations of communities and families of color by the War on Drugs," Gillibrand writes. "But it’s long past time to start making this right. With this plan, we can begin to dismantle the institutional racism in our criminal justice system, open up important new medical and economic horizons, and lift up communities who need and deserve a fair shot at opportunity."