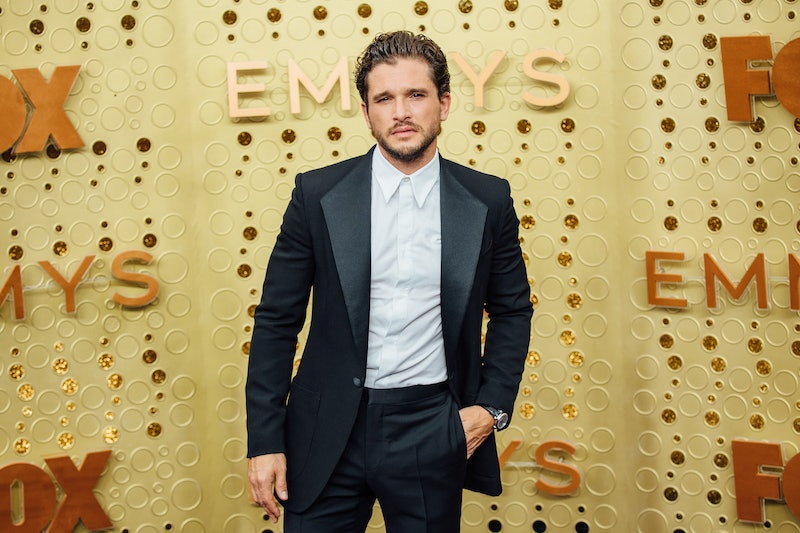 As widely popular as Game of Thrones was, there are, in fact, some people out there who have yet to watch the highly anticipated eighth and final season of the series. That in itself may not seem all that shocking, until you discover that one of those people played a pivotal role in the show. During the backstage press room interviews at the 2019 Emmys, Kit Harington admitted he hasn't seen the final GoT season, despite the fact that he's served as a starring character on the show since its inception.

The subject came up when the cast was asked to comment about the significant backlash the final season of GoT received, with many fans feeling that the plot seemed rushed and characters were acting, well, out of character. "I still haven't seen the show," the actor admitted to reporters, as per Entertainment Tonight. "So that's how I dealt with that controversy. I haven't seen the final season." Granted, it's not uncommon for actors to not watch the various works they star in, though it's difficult to envision anyone not being caught up on a show like Game of Thrones. (And given how spoiler-heavy the Emmy clips were, that's definitely a good thing.) But alas, Harington's watch has yet to even begin.

However, that didn't stop the actor from immediately coming to the show's defense in light of the pushback the season faced. "I know what it took to shoot it," he explained to reporters. "And it was hard and everyone put their love and effort into it." And while the fans may not have agreed with the ending, Harington assured everyone that the cast felt very differently on that front. "I think for us, we knew what we were doing was right, story-wise. And we knew that it was right for the characters because we lived with them for 10 years," he added. "So controversy for us didn't really affect us."

That last part may not be entirely accurate, though. Numerous cast members have voiced their strong opinions over the final season and the backlash that followed. During an appearance at Con of Thrones back in July, Nikolaj Coster-Waldau passionately defended the final season against what he referred to as "vicious" fan backlash. “For anyone to imagine or to think that the two creators of the show are not the most passionate, the greatest, the most invested of all, and to for a second think that they didn’t spend the last 10 years thinking about how they were going to end it is kind of silly," he said at the time, as reported by Huffington Post.

The actor also admitted that the negative remarks about the final season had become a sore subject among cast members in their WhatApp group chat. "I saw some people getting a little upset because some of the stuff is vicious," Coster-Waldau recalled. "There was that kind of weird feeling of, ‘What the hell? We worked so hard.' I’m not asking anyone to feel sorry, by the way. That’s not what I’m saying. I’m just saying how it was to get through that whole thing.”

Thankfully, all that hard work turned out to be worth it — Game of Thrones walked away with an Emmy for Best Drama Series one final time. Perhaps the win will help to motivate Harington to watch Season 8 once and for all.