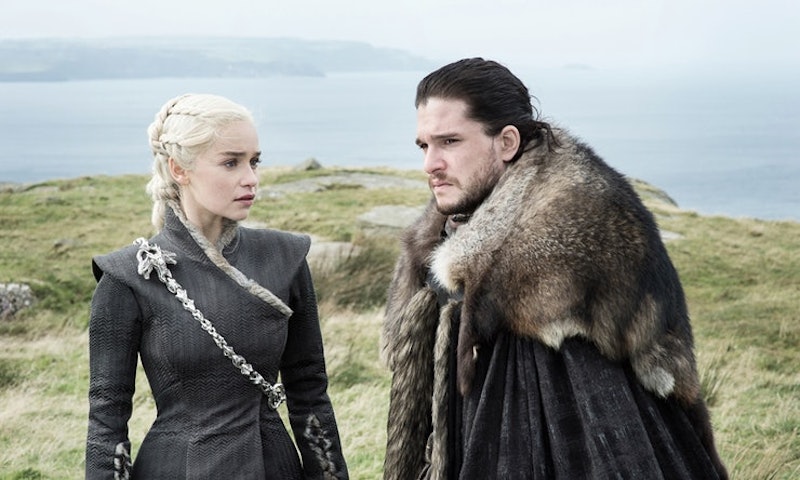 It feels like an eternity since Game of Thrones Season 7 wrapped in August, and fans aren't alone in thinking this. Apparently, in the off season, Kit Harington has lost his mind. The actor has a proposal for how Jon Snow reacts to learning Daenerys is his aunt in Season 8, and it is... a lot. Arguably, too much. Rose Leslie's fiancé has played Jon Snow since 2011, and one would think he'd have a good grip on the character by now. However, on Oct. 21, Harington revealed that he's ready for Jon Snow to be super into the idea of Dany being his aunt. Say what?

Before the series wraps in (presumably) 2019, Jon Snow will find out that Daenerys — political rival, political ally, and his new lover — is his aunt. And, during an interview with The Guardian, Harington revealed how he thinks Jon Snow will react to the reveal:

“I really hope that he just nods slowly and goes, ‘Damned right’... something really horribly inappropriate, and you find out Jon’s had a really sick mind the whole time. That’s the way I’d love to play it. I’ll try it for one take, anyway."

That sound you heard in your head just now? That's a record scratch processing that bit of information.Who thinks like that?

As confirmed in the Game of Thrones Season 7 finale, Jon is actually Aegon Targaryen, the son of Rhaegar Targaryen and Lyanna Stark. Since Rhaegar and Lyanna were wed in a secret ceremony, this makes Jon the rightful heir to the Iron Throne. He's a Targaryen. He's not only not a bastard, but a descendant of one of the most ancient and powerful families in Westeros. Remember: the fans know this. Jon Snow, true to form, does not. Also a Targaryen: Daenerys, Khaleesi of the Great Grass Sea, etc. Being the last remaining Targaryen is her whole thing.

Sure, over the last seven seasons, Jon Snow has definitely become unpredictable. He's still sweet and fierce and frustratingly noble, but he has a dark side now. Dark enough to be psyched about incest? Hopefully not. It's much more in character for Jon to have a total freakout, because that would be a lot of information for anyone to process: the inheritance, the incest. Snow's only been in love with one other person — Ygritte, the fiery Wilding — and now he's in love with his political rival-slash-ally-slash-aunt. There's no way his reaction will be as bad as Harington hopes. There can't be.

In general, the young King in the North has been through an unthinkable amount on the HBO series. In seven seasons, he's been separated from his family, nearly murdered, actually murdered, brought back to life, fallen in love, watched his love die in front of him, and on and on. Jon Snow grew up believing he was Ned Stark's bastard son, and his entire life has been based on this lie. So, it's not completely strange of Harington to hope his character has some wiggle room for a grand reveal — just not one like this.

Then again, for someone with so much power, Snow is improbably naive. He's experienced a lot in Westeros, but attributes too much significance to having traveled beyond the Wall. It's also been a few episodes since he's let any emotion loose — arguably, his last great meltdown followed Season 6's Battle of the Bastards. The idea of Snow taking a whole yeah, baby approach to this massively weird and complicated case of incest? No way. But maybe fans wouldn't be above seeing the aforementioned one take on a Game of Thrones Season 8 blooper real.