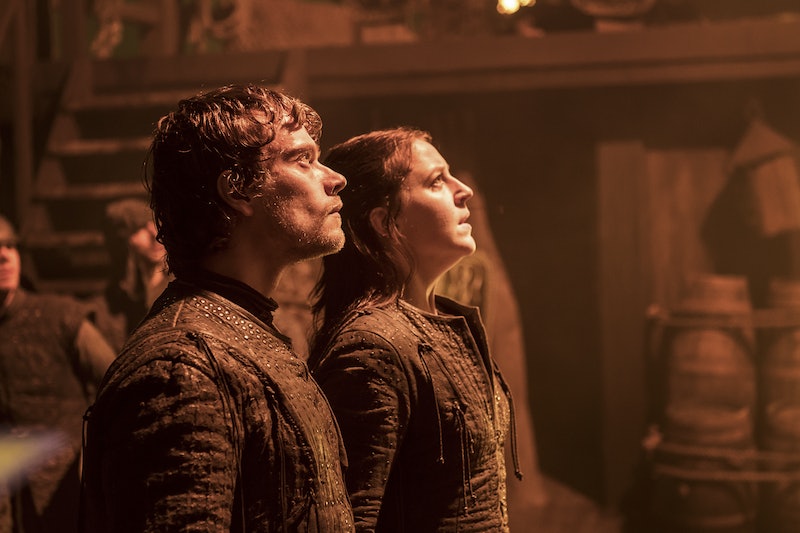 Most fans have likely heard more than their fair share of these, but the Game of Thrones fan theory about the valonqar prophecy is the one that everyone should believe in. You probably remember the valonqar prophecy, but there's a way of interpreting it that turns it into a prediction that Theon Greyjoy will be the one to kill Cersei Lannister. And, when you think about it, it makes more sense than anything else..

The valonqar prophecy was delivered to Cersei in her youth by a fortune teller named Maggy the Frog. It predicted the death of her three children — accurately, as we now know — and ended with the ominous line, "And when your tears have drowned you, the valonqar shall wrap his hands about your pale white throat and choke the life from you." As Cersei learned when she took the prophecy to Septa Saranella for translation, "valonqar" is a High Valyrian word that means "little brother."

Naturally, that fact had many fans looking to the ruthless queen's own younger brothers: Jaime and Tyrion Lannister. While Cersei still lives, the only question is which brother will cause her eventual demise. She's kept a very close eye on Tyrion, especially ever since he and his crossbow proved that he has no issue killing family members. And it would be difficult to ignore just how... close Cersei keeps Jaime.

But what if neither brother is the one destined to deliver the killing blow? Cersei's blood relatives would be the expected choice, and if there's one thing Game of Thrones has taught us, it's to look beyond the expected, especially when it comes to Cersei. When we thought she had slipped up and accidentally revealed her pregnancy to Tyrion, it turns out it was a calculated maneuver. When we thought she had lost the allegience of Euron Greyjoy after the reveal of the wight, she had actually sent him to summon the Iron Bank. Every move with Cersei makes seems to have an unseen twist waiting just around the corner, so why should her death be any different?

With that in mind, skip past your initial instinct as to the identity of the valonqar, and hear us out on this conspiracy theory. What if it's someone without a blood connection to the current Queen of the Iron Throne at all? After all, there's nothing the prophecy that specifies whose younger brother the valonqar is, only that he is a younger brother. There are many such younger brothers to choose from on the series, but only one that is actually referred to by that title: Theon Greyjoy. In many of their conversations, his older sister Yara refers to Theon directly as "younger brother," as if that's his name.

Reddit user Scullery Wench also points out Theon's propensity to forget his own name, as we noticed during the whole Reek saga. That early identity could be something that he falls back on as his brain becomes more and more tortured. Plus, with Yara now captured by Euron and delivered to Cersei, Theon has all the incentive in the world to wish for the Lannister queen's death.

He also has a lot of work to do as far as earning back the trust of his elder sibling, after that cowardly boat-leaping stunt. When the moment came to stand up and protect his sister, Theon failed; even if he later changed courses and is now determined to rescue her, that moment of weakness cost Yara dearly. The most important thing, though, is that the stage is set for Cersei's death to be a sort of redemption for Theon — as well as fulfilling the last portion of Maggy's prophecy.

If the show can stay ahead of its audience in the meantime, and bring her death at the hands of someone unexpected, then that's what they call killing three birds with one stone. And that's why every fan needs to get on board with this theory.