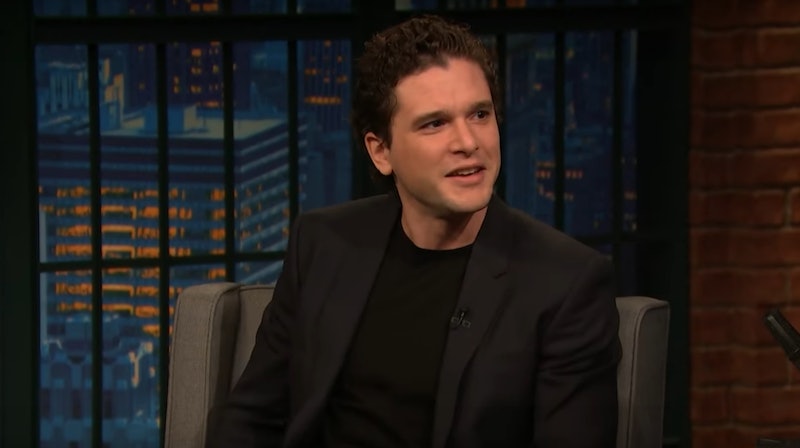 A prestigious legacy has come to an end. You had a good run, Jon Snow. It really is a shame what happened. While it seemed simple enough in theory, Kit Harington's April Fool's prank on his wife Rose Leslie went really wrong this year — but like, really wrong in a very funny way, the actor revealed during a recent interview on Late Night With Seth Meyers, as reported by E! News.

Now, as many fans likely know, Harington and Leslie got married last year after falling in love on the set of Game of Thrones. Just a few months before they walked down the aisle, Leslie — who was promoting The Good Fight at the time — appeared on Late Night, and shared a story about her soon-to-be husband's prankster nature.

"[Leslie] ... said you pulled a very cruel — and the audience agreed with her — that it was a very cruel April Fool's Day joke," Meyers reminded Harington. "She opened the refrigerator and you had that there," the host said, flashing a photo of the evidence. The "that" he was referring to was a fake decapitated head, created in the likeness of Jon Snow. Leslie was less than thrilled, to say the least.

"So, did you back off April Fool's?" Meyers asked the star. "Do you do no pranks the year after that, or do you try something else?" Harington, looking somewhat defeated, replied, "See, I started strong. The amount of props at my disposal has diminished."

He then went on to admit that he did, in fact, pull an April Fool's prank on Leslie this year. Was it as good as the head in the fridge? Definitely not. It was a solid effort, though — if only it hadn't backfired so very hilariously.

"I'm aware this is the most first world April Fool's, before I tell this story," Harington started. "I didn't know what to do, but [Leslie] has a favorite almond milk. She won't drink any other almond milk. So, I just wrote an article about how this company that makes her favorite almond milk was going under because of Brexit," he continued, drawing laughs from the crowd.

Yeah, OK, that's pretty funny. A huge step down from the head in the fridge, but still funny. But wait — there's more. "Now this backfired," Harington explained, "'cause she immediately rang my PA [personal assistant] and got her to bulk-order this almond milk with my credit card, so I ended up spending 150 quid on almond milk."

Yikes. 150 quid, by the way, is the equivalent of almost 200 U.S. dollars. You can buy a *lot* of almond milk with $200. "It turns out the only thing more terrifying than seeing your severed head in a refrigerator is just cartons upon cartons of almond milk," Meyers joked.

Ah, well. You win some, you lose some. Better luck next year, buddy. Hey, at least you two will never go thirsty for almond milk again. Silver lining?