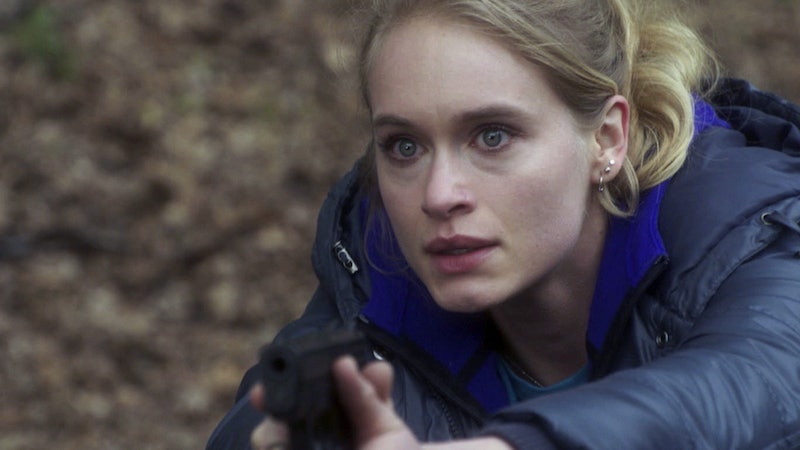 After being kidnapped as a child, Kick in Gone vows to never be a victim again, and trains herself in martial arts and the use of firearms. Frank Novak, the FBI agent who rescued her, later recruits her to join a special task force he created to solve abductions and missing persons cases, and she brings her expertise to the team to start saving kids and apprehending bad guys. It's an incredible story that sounds like it could be ripped from the headlines, but Kick isn't based on a real person.

In actuality, Kick, and Gone as a whole, is based on Chelsea Cain's 2014 book One Kick. The author acts as a consulting producer on the TV series, but the show was created by Matt Lopez, who has written for family-friendly movies like Race to Witch Mountain, Bedtime Stories, and The Sorcerer's Apprentice. In an interview with Variety, he discussed what it was like to adapt such a harrowing story for TV.

"I kind of felt ... like it's almost scarier to not show onscreen depictions of abuse and torture and so on. I think we all know what happens to those girls. ... I don't think you need to hit the audience in the face with it," Lopez said, adding that people "all know" the abduction stories of Jaycee Dugard and Elizabeth Smart. As the book review of One Kick by The Guardian outlined, Kick in the novel was held captive from the ages of 6 to 11 and the sexual assault she experienced at the hands of her captor was filmed and distributed.

Variety also spoke to Leven Rambin, who stars as Kick, about her preparation for the role. She said she read books by Dugard and Smart. In another interview with Hidden Remote, Rambin said these books, particularly the ones written by Dugard, gave her the perspective of how abduction completely alters someone's life. "I just realized the depth of history I needed to include in my character and my being and how much [abduction] effects you for the rest of your life," she explained. "Day in and day out, it's a struggle for peace and a struggle for happiness. It's a battle [where] you have to pick yourself up, or you give in to the depression and hopelessness."

Beyond reading, Rambin worked directly with survivor and advocate Alicia Kozakiewicz for the series. As Kozakiewicz detailed in an article for BBC News, she was abducted at the age of 13 by a man she had met on the internet, whom she thought was her age. He held her captive and sexually abused her for four days until the police found her. (As reported by NBC, Scott Tyree pled guilty in connection to the case and served most of a 19-year prison sentence.)

Rambin told Variety that Kozakiewicz gave her insight about what Kick's mindset would be like after experiencing such trauma. "She would say things like, 'No, you could never do that — you could never go into a public place without somebody else' ... or 'You can't sit with your back toward the restaurant door. You can't look at children holding hands with adults the same way,'" Rambin said.

With the task force solving a crime each episode, Gone will have a procedural feel, but it will also follow the psychological impact that Kick's own abduction has had on her. "This is a very deep, courageous, psychological struggle that she's doing every day," Rambin told Variety. "I really wanted to be really truthful ... so that anyone who's been through that could be really seen and heard and understood by me and our team." So while, thankfully, Kick's story isn't real, the team at Gone tried to handle her experiences as honestly as possible.