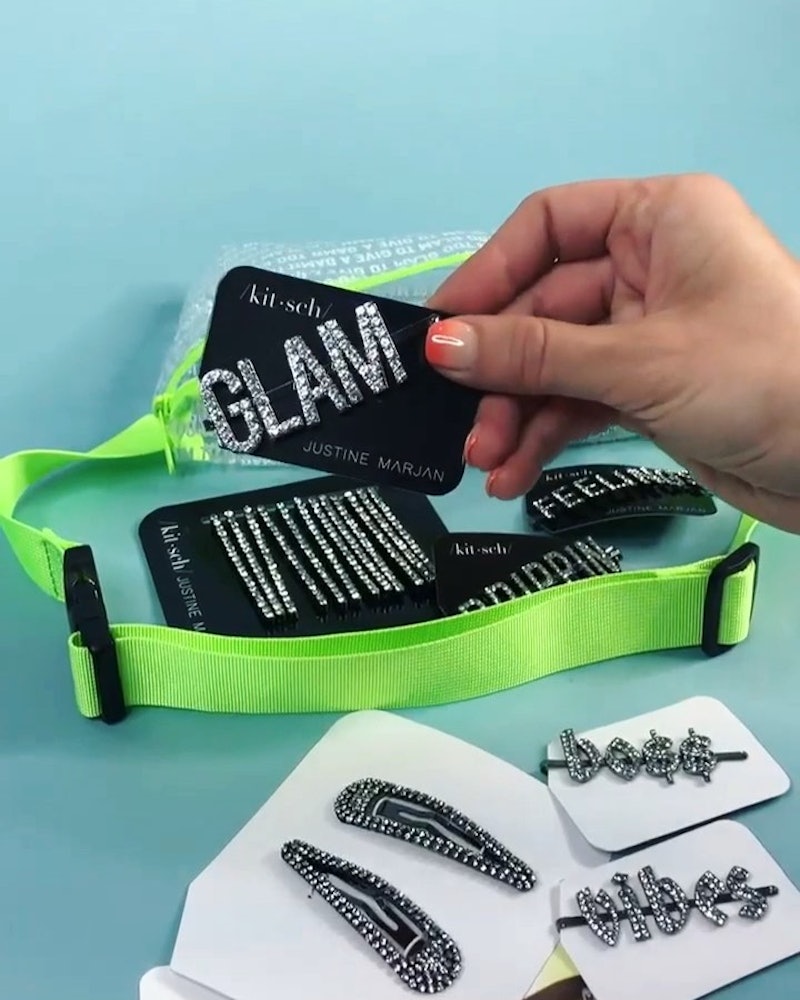 If you've been keeping up with celebrity trends, you've probably seen that there's a new hair accessory in town that everyone seems to be wearing. From Real Housewives to singers like Ariana Grande, barrettes are back, and the Kitsch x Justine Marjan word hair clips they've been wearing are heading to your Sephora. You can get that blingy look all on your own.

The name Justine Marjan may sound familiar to you if you're a follower of celebrity style, but if you don't watch closely enough, you may have missed this hair styling star's name. Marjan is, obviously, a celebrity hairstylist, and she's got one impressive client list. From Khloe and Kim Kardashian to Chrissy Teigen to Ashley Graham, Marjan's list of clients is impressive. Plus, you may have also heard her name as the lead hairstylist on Bravo's latest season of Project Runway. Now, Marjan's name is about to land in Sephora thanks to the help of Kitsch.

The Kitsch x Justine Marjan collection features bejeweled hair clips a la the early 90s, glittering bobby pins, and blingy word clips with phrases like "Drippin" and "Icon." Yes, you've likely seen them on celebrities, but now, they'll soon be officially available at Sephora for you to shop.

The Kitsch x Justine Marjan collection is will hit both Sephora online and in stores in September. As for the cost of the hair clips, they're actually not so bad considering all the bling you're getting. Every piece in the collection available at Sephora retails for $29.

The collection is filled with fun word clips like the Vibes pin above as well as others that read "Drippin," "Glam," and "Feelings."

Celebrities like Ariana Grande have been spotted in the gleaming word pins. In fact, Grande has been rocking the collection quite a bit during her Sweetener tour including the rhinestone covered hair clips. Grande's hairstylist Josh Liu uses both types of clips to add a bit of fun to the singer's iconic pony.

Grande isn't the only one wearing them, though. In fact, they made an appearance at the Met Gala this year. Ashley Graham's ultra-glam long ponytail filled with hair clips at the gala was the work of Marjan herself, so of course, it included several of her Kitsch collection clips.

Then, there are the celebrities who have popped up on both Marjan and Kitsch's Instagram accounts. Everyone from Christina Aguilera to Bebe Rexha, the clips only seem to be growing in popularity. Plus, you'll get to see them on your television screen soon, as well. According to her Instagram account, Real Housewives of Beverly Hills star Dorit Kemsley will be rocking an actual head full of the clips for the show's reunion episodes with a style created by Marjan herself.

If you want to rock the latest hair trend to hit your favorite celebrities' styles, the Kitsch x Justine Marjan collection is going to be perfect for you. With easy shopping at Sephora coming in September, there's no reason not to rock that bling.