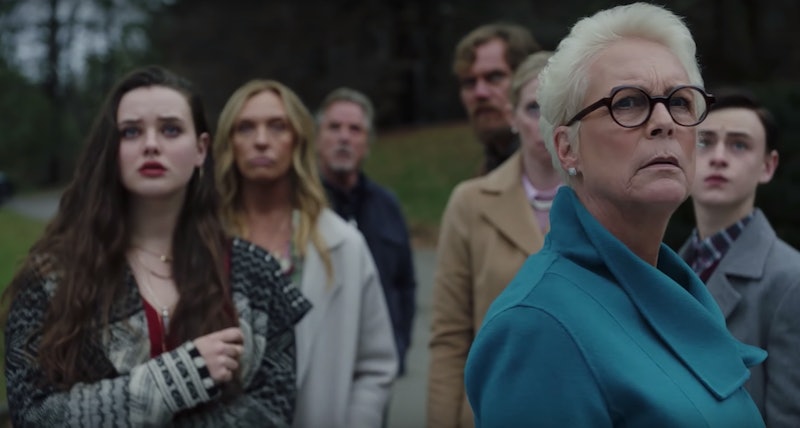 While the star-studded cast alone might be enough to draw audiences into theaters for Knives Out (opening Nov. 27), the mystery at its center is what's keeping them in their seats, if early reviews are anything to go by. At its core, it's a "whodunit" mystery, with a veritable mansion full of people trying to figure out who murdered a famous novelist. It's a premise that sounds like it was pulled right from any murder mystery novel, but Knives Out isn't actually based on a specific book. The story just feels incredibly familiar, and it owes that familiarity to some classic mystery literature and a certain cult film.

Like any good murder mystery, it's probably best to go into Knives Out completely blind. That way, the twists and turns that are the bread and butter of the mystery genre can feel all the more surprising and suspenseful. But just in case that's not how you operate, here's a little more context: In Knives Out, famous novelist Harlan Thrombey (Christopher Plummer) invites his family to join him in his mansion for his 85th birthday party. But the morning after the party, they find Harlan dead. It falls to famous detective Benoit Blanc (Daniel Craig) to sort through each family member's possible motives for murdering Harlan and figure out who might have killed him.

If that premise sounds familiar, it's because it should. In a chat with Variety, director Rian Johnson cited his love of a specific author's work when developing Knives Out. "I grew up reading Agatha Christie’s books," he said. "I wanted to make a whodunit for forever. Ten years ago, I had a very basic idea for this and have just had it cooking ever since." Christie, a famous mystery novel author who published 66 mystery novels between 1920 and 1976, was the creator of Hercule Poirot, a fictional Belgian police detective who, in the vein of Sherlock Holmes, was said to be "one of the greatest detectives of all time." As mentioned in the trailer, detective Benoit Blanc carries a similar reputation, and the circumstances surrounding his investigations carry thematic similarities to Poirot's. As Johnson told Empire Magazine, "Benoit Blanc has some of the elements of Poirot, in that he’s a bit self-inflated, but there’s a warmth to him which shines through with Daniel [Craig]."

But the similarities to other beloved mysteries don't stop at Christie. The film has drawn comparisons to 1985's Clue, which was a cult classic murder mystery parody based on the board game. There, in similar fashion, a group of six people (albeit strangers, not family) are invited to a mansion for dinner. But after the host turns up dead, it's up to them to find out who the killer is before they strike again. Clue has more of a parodic, comedic tone, which contrasts with Knives Out, as Johnson notes in a chat with Vulture. "I had to make very clear to everybody that we’re not doing Clue," he said. "It’s not an arch parody. It’s going to be fun and it’s going to be funny, but the goal here is to do something that has the actual pleasures of the genre." Judging by early reviews of Knives Out, it seems he's succeeded.

More like this
The 'Spiderhead' Movie Ending Is Nothing Like The Short Story It’s Based On
By Morgan Leigh Davies
Everything You Need To Know About The 'Knives Out' Sequel
By Grace Wehniainen
'The Undeclared War' Spotlights The Real-Life Threat Of Cyber Attacks
By Maxine Harrison
15 Intriguing Movies On Netflix That Are Based On True Events
By Mary Kate McGrath, Shannon Barbour and Grace Wehniainen
Get Even More From Bustle — Sign Up For The Newsletter