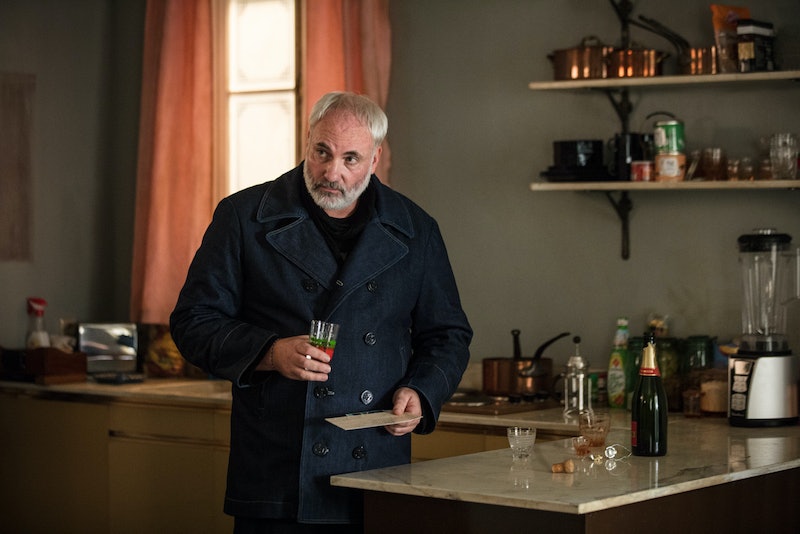 Spoilers ahead for Killing Eve Season 2, Episode 2. Just when you thought Konstantin Vasiliev (Kim Bodnia) was out, Killing Eve has pulled him back in. Somehow, someway, Villanelle's former handler turned up in the April 14 episode — in Carolyn's (Fiona Shaw) living room, no less. The end-of-episode cliffhanger isn't explained, but that Konstantin is alive on Killing Eve will certainly complicate things for everyone involved.

This episode follows Villanelle as she takes advantage of a seemingly kind (but secretly creepy) man named Julian, who she eventually murders. When the news of Villanelle's latest conquest makes its way to Carolyn and Eve, they both agree Eve is going to need to get some protection. Enter, apparently, Konstantin. Before making the big reveal, Carolyn asks Eve to promise she "won't be cross," hinting she knew Konstantin was still out there all along. In retrospect, this checks out, since Carolyn was the one who told Kenny and Eve that he was dead.

As a quick refresher, Villanelle shot Konstantin in the Season 1 finale. And while we never saw his body, it was heavily implied — by Carolyn — that the Russian was dead as a doornail. However, this wouldn't be the first time characters have cheated death — Villanelle herself has, against all odds, survived Eve's stab to the abdomen.

However, it's not often that Villanelle fails to kill someone. Her body count includes Cesare Greco, Zhang Wu, Frank Haleton, Bill Pargrave, Gabriel, Julian — and those are just a few. As Eve points out in this episode, Villanelle's killings are often dramatic, flamboyant, and even comical (as illustrated with the toilet brush she's shoved into Julian's mouth, postmortem). So although the assassin tracked Konstantin (and, oh yeah, kidnapped her daughter) in Season 1, shooting him in that tea parlor seemed spur-of-the-moment and didn't have her usual panache. So either Villanelle didn't mean to kill him, or he recovered despite her best efforts.

And if Konstantin does end up being hired to protect Eve, as Carolyn implied, can he really be trusted not to switch sides? After all, Villanelle has a powerful, charismatic hold on people — Eve and Konstantin included. That said, Villanelle views Konstantin as a kind of father figure — albeit in a strange, perverted kind of way.

To say that Villanelle is impulsive would be an understatement. Her allegiances change seemingly at random, and it's always difficult to tell how she'll react to any given situation. Even after Eve stabbed her, she's still hell-bent on finding her — whether to kill her, have sex with her, or both, it's unclear. She likely hasn't stopped to think about the semantics of her obsession, and neither has Eve with her own. But their complicated, obsessive relationship is bound to reach a breaking point, and perhaps Konstantin will be there to watch it all go down.

More like this
'Waterloo Road' Is Back, With More Than A Few Familiar Faces
By Sam Ramsden and Vivian Iroanya
The One Detail From The Tampongate Scandal That The Crown Missed
By Karen Fratti
Sophie Turner Will Star As A Notorious British Thief Next
By Darshita Goyal
'The Texas Killing Fields' Suspect Clyde Hedrick Was Released On Parole In 2021
By Grace Wehniainen
Get Even More From Bustle — Sign Up For The Newsletter