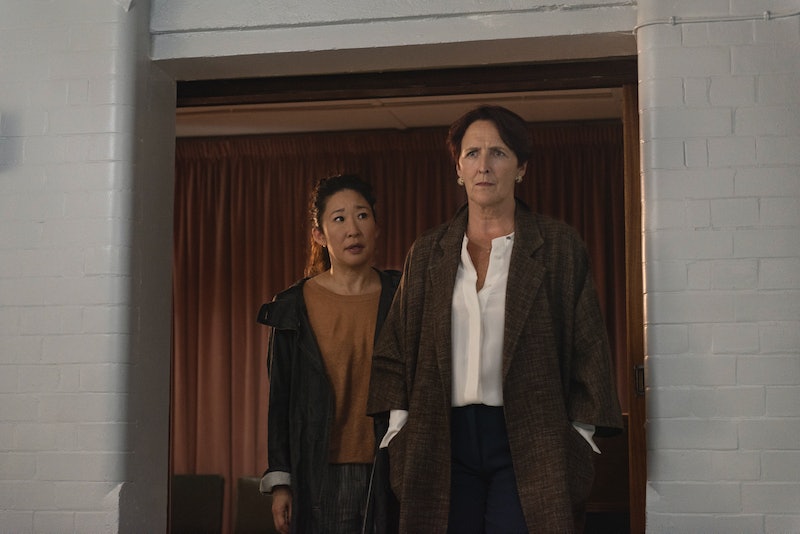 Spoilers ahead for the Killing Eve Season 2 premiere. Eve Polastri and Villanelle are back at it again during the Killing Eve Season 2 premiere. And with British intelligence presuming that Villanelle is still alive, Eve is also back to work with Carolyn. But could Carolyn be part of the 12 on Killing Eve? The MI6 officer in charge of the Villanelle investigation fired Eve in the Season 1 finale, but our heroine wasn't too worried since she had already began to suspect that Carolyn was working with the Russians. However, the two women reunite in the April 7 premiere with the mutual understanding that they are both keeping secrets from one another. And maybe through their alliance based out of need, Eve will finally discover more about the mysterious 12.

The Season 2 premiere of Killing Eve starts just 30 seconds after the events of the Season 1 finale. Both Eve and Villanelle flee Villanelle's Paris apartment after Eve stabs her. Eve tries to go back to her normal life in London but is quickly contacted by Carolyn again. Turns out, Eve's firing in Season 1 wasn't so permanent, and they begin investigating the death of Alistair Peel and its possible connection to Villanelle. But even though she's back in the ranks of British intelligence, Eve isn't forthcoming with Carolyn when it comes to what happened with Villanelle in her Paris flat. And it's unclear if her silence is out of distrust for Carolyn, out of protecting her true feelings for Villanelle, or (the most likely scenario) a little of both.

Carolyn knows that Eve is lying about what happened in Paris, but she doesn't seem too concerned about it. Instead, Carolyn wants Eve's help in figuring out who killed the "internet guy" Alistair Peel, who died months ago. While his death wasn't suspicious at the time, Carolyn reveals that the note Nadia slipped under her prison cell door addressed to Eve only contained the words "Alistair Peel." As Entertainment Weekly reported, Season 2 will look into the "mysterious" Peel family. This will also most likely lead to the new killer that Eve will be investigating in Season 2.

Before Villanelle killed her, Nadia was also an assassin for the 12. So it's possible that Peel has something to do with the 12 — either he was one of them, or the 12 wanted him dead. After all, Carolyn had specifically asked Nadia who she was working for when they went to visit her in prison back in Season 1, Episode 6, "Take Me to the Hole!"

However, none of this really addresses what Carolyn is up to. Eve had every right to be suspicious of her boss in Season 1. Konstantin was working for the 12 in some capacity, since he was Villanelle's handler, and not only did Carolyn defend him, she suggested she had a sexual relationship with him. Plus, Carolyn went to see Villanelle without telling Eve. So Eve questions her boss in the Season 2 premiere. "What's going on with Konstantin and Moscow? And what were you doing talking to Villanelle in that prison? I mean, who do you even work for? Are you a part of the 12?"

But if you thought Killing Eve would give the answer to that question so easily, think again. "What really happened in Paris? Why was Nadia's note addressed particularly to you? And why are you and Villanelle so interested in each other?" Carolyn counters. "See how it works?

Because Carolyn is so willing to work with Eve again, it seems less likely than it did at the end of Season 1 that she's a member of the elusive 12. Still, Carolyn probably knows more than she's letting on about the organization. After all, Villanelle told Eve in Season 1, "If you went high enough, you'll find we work for the same people." Whether or not she was referring to Carolyn, we'll have to wait and see.