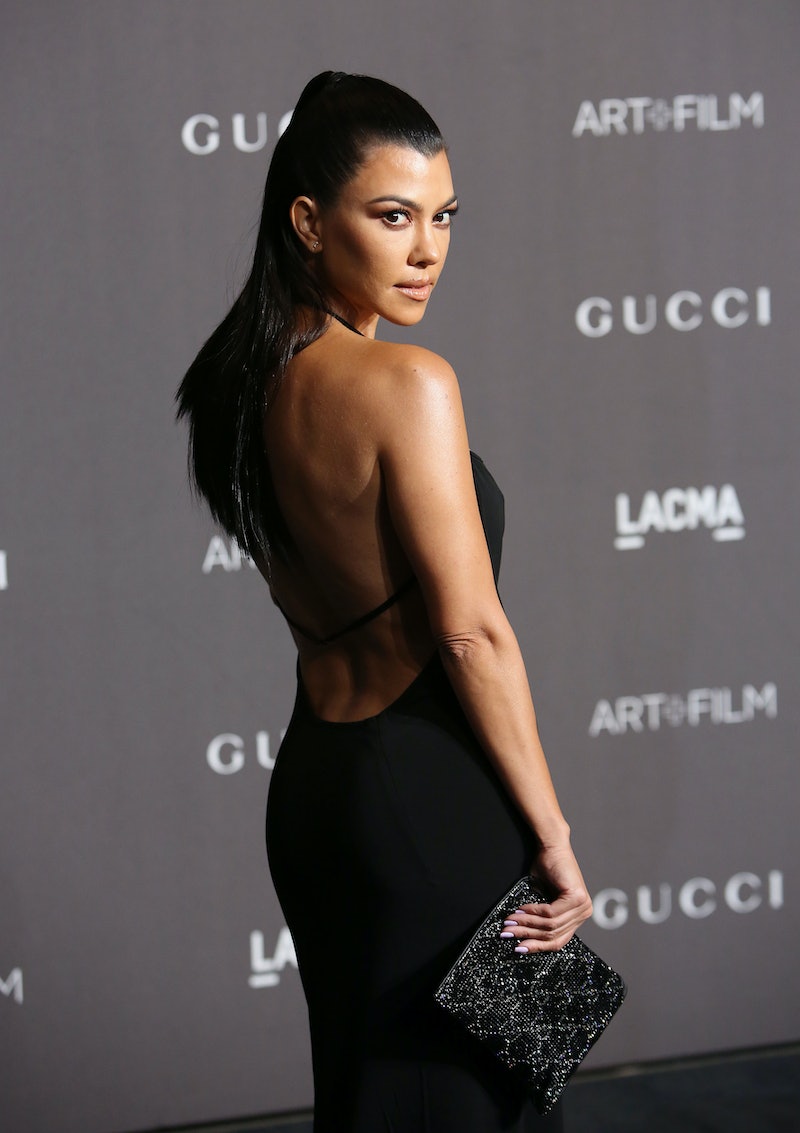 Members of the Kardashian-Jenner family love to experiment with wigs, extensions, cuts, and colors. Still, when Kourtney Kardashian showed off long blonde hair on her Instagram feed on Sept. 29, it was quite surprising. The oldest Kardashian sister is known for long and glossy black strands and, unlike Kylie, she rarely diverts from her signature style. With these new, super straight, waist-length strands (which are almost definitely a wig) she looked like Barbie.

Kardashian added the caption "Her name is Daisy" to the post debuting her blonde locks. As Cosmopolitan points out, the picture appears to have been taken in her little sister Kylie Jenner's house. The framed portrait of Barbie in the background served as proof that the shot was taken in Jenner's abode since decor featuring the doll was spotlighted in her Architectural Digest cover story from earlier this year. Jenner's love for wigs is also well-documented, so it's easy to hypothesize that Kardashian was simply trying on one of her sister's hair pieces in the shot.

Cosmo also suggests that "Daisy" might be the name of the wig that Kardashian rocked in the photo. In fact, it may have been the same one Jenner wore in December 2018.

Kourt's wig also looks similar to one Jenner wore in a campaign image for the 2019 Kylie Cosmetics x Koko collaboration. As of now, this is the only photo Kardashian has posted of herself with that long, blonde hair.

Kourtney Kardashian going blonde is extremely rare but it has happened at least once before. She told PEOPLE back in 2017 that she was actually the first person in her family to experiment with blonde hair before they became ultra famous. "I was the original sister with the blonde hair!" Kardashian said at the time, referring to a golden lob she once had. "I was blonde in high school for just like a month. I think I was in 11th grade or something." The mother of three also confirmed to PEOPLE that she is committed to the brunette life, saying, "I'm just a brown-haired girl. It just suits me. I like my dark hair."

Kourtney Kardashian isn't the only Kardashian to go temporarily blonde this month. Kendall Jenner rocked a honey blonde look when walking the Burberry show during London Fashion Week. She quickly ditched the shade in favor of her natural chocolate locks when appearing at the 2019 Emmys a few days later.

Momager and matriarch Kris Jenner wore a platinum blonde bob wig to the 2019 Met Gala in May. It was a total change from her signature black pixie. Like Kendall and Kourtney, she has a hallmark hairstyle that she sticks with.

However, Kim Kardashian West has experimented with several variations of blonde through the years. She showed off icy blonde strands in September 2017 and returned to them in the promo campaign for her KKW Beauty Sooo Fire collection in July 2019. But she almost always finds her way back to her signature black locks.

Blonde hair has been a recurrent look for makeup mogul Jenner in recent times. She slayed a platinum updo at the MTV VMAs in August 2018 and was golden blonde in the aforementioned Kylie x Koko campaign. Overall, she has remained dark-haired for much of 2019.

Khloe Kardashian has been fully dedicated to her blondeness for the past several years — even though she first arrived on the scene with super long, chestnut waves. She has proven adventurous with her strands, switching from long to bobbed and from white blonde to more of a honey hue over time.

While Kourtney Kardashian's blonde hair appears temporary, it sure was fun to see her switch up her signature look.