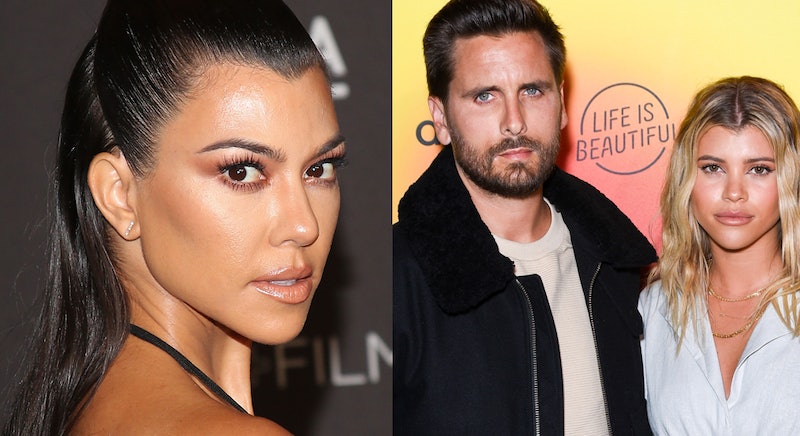 Breakups can be hard, especially when your ex stars dating again. So it's understandable that Keeping Up With The Kardashian fans may have assumed that there would be drama between Kourtney Kardashian and Scott Disick's new girlfriend Sofia Richie. However, Kourtney has not only embraced the new relationship, she actually doesn't mind spending time with her ex and his new GF. On the June 9 episode of KUWTK, Kourtney revealed why she travels with Scott and Sofia. (The trio most recently vacationed in Cabo San Lucas in Mexico this past December.)

In the episode, fans learned that Scott wanted to go somewhere warm for Mason's birthday (LA is pretty warm even in December, but OK), and he planned to take Sofia along with him. The couple has been dating for nearly two years already, so she's not a flash in the pan rebound. As such, Kourtney seems to be making a concerted effort to get along for the sake of her kids. She's always prioritized her children, which is part of the reason she still co-parents so closely with Scott. She wants her children to have both of their parents in their lives and to not miss out on experiences with either of them.

Ultimately, that's why Kourtney decided to go to Mexico. She said that Scott and Sofia were going anyway, and she would have had FOMO if her whole family went without her. "I had a great time, I swear," Kourtney told her mother, who said in a previous scene that she thinks Kourtney will still wake up one day and realize she's in love with Scott. Kourtney, though, is just trying to keep things peaceful for everyone. She cited the example of when her parents, Kris Jenner and Robert Kardashian, divorced and later became friends, it made everything smoother. "As soon as everyone got along, life was so much easier," Kourtney said.

So she and Sofia are getting along. Just because they share dating Scott in common doesn't mean they can't be friendly. Women are very capable of having complex female friendships that don't result in drama. "Honestly it was fine," Kourtney said of the trip. "[Sofia's] like easy to be around."

So easy to be around, in fact, that Scott took a photo of him in Cabo with the two women on pool chairs next to him. "What more can a guy ask for. THREE'S COMPANY," he captioned the shot with his trademark sense of humor.

Kourtney said the three of them just had to work out sleeping arrangements, and the Mexico trip was fine. Kourtney stayed with the kids, and Scott and Sofia stayed in another building. Easy peasy. Kris may not understand their arrangement, but that's OK. As long as Scott, Sofia, Kourtney, and the kids are comfortable with the arrangement — that's all that matters. "As long as we're all OK with it, I think it's really amazing to be able to all travel together," Kourtney said.

Still, Kourt knows when to draw boundaries. She said during the episode that the three of them won't take all their trips together. (And, indeed, Sofia didn't come to Bali with them). But fans may be seeing more of Sofia as the show goes on and her relationship with Scott deepens. For example, she also attended the Kardashian Christmas Eve party, which Kourtney said was totally fine. "[We're the] picture of the modern family," Kourtney said with a smile during a confessional. And this modern family is doing just fine, thank you very much.