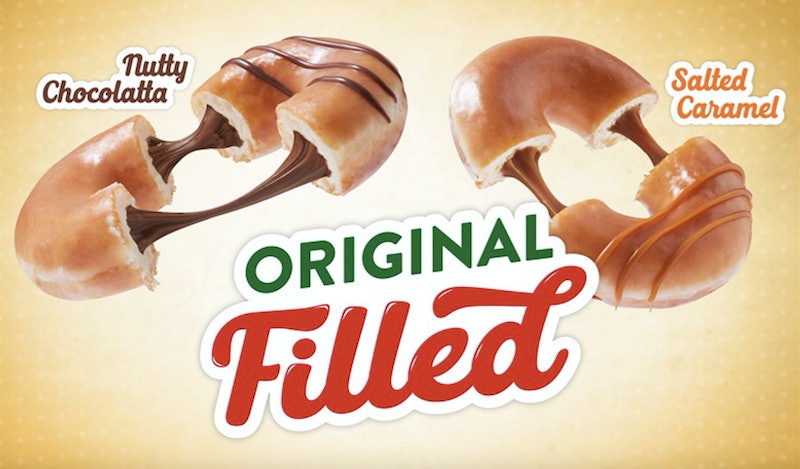 The original glazed by Krispy Kreme is in a league of its own in terms of donuts. If your donut experience has been limited to the bakery section of a grocery store or leftover trays in the conference room at work, you are in for an awakening. When the red light is on at Krispy Kreme, you can expect a treat that is more like a funnel cake than a breakfast food. But that's not even the exciting news. Donut lovers can now snag a dozen classic Krispy Kreme donuts stuffed with Nutella or salted caramel.

Per Delish, the breakfast chain has introduced two new reinventions of the classic confection that made them famous as part of the U.K. branch's lineup. The new Krispy Kreme Nutty Chocolatta, per its description on the brand's website, is "Filled with pure Nutella hazelnut spread, dipped in chocolate flavour coating and topped with white chocolate flavour and hazelnuts." The Salted Caramel is described simply as the "signature Original Glazed ring filled with salted caramel."

The donuts hit store shelves in early February. But, if you haven't seen them at your local Krispy Kreme, there's a pretty good reason for their absence. Right now, these two flavors are only available at Krispy Kreme locations in the U.K. Yes, as it turns out, a quintessentially American breakfast chain has an exclusively English menu. I looks pretty impressive, too.

Breakfast lovers in the U.K. are in fact VERY passionate about their doughnuts (yes, it is spelled like that across the pond). Delish also reports Krispy Kreme U.K. hosted a pop-up experience in London's Leicester Square this past weekend, March 8 through 9. The official Facebook event page indicates the event boasted a, "...deliriously delightful and delicious space, FILLED with intriguing surprises, including the new Krispy Kreme Original Filled." Included, naturally, were doughnuts to sample. If you didn't get a plane ticket in time to head across the pond for this event, you can still get the new releases for roughly $2.47 USD, per Marie Claire.

Krispy Kreme is also releasing some pretty exciting new products on this side of the pond, too. A different style of exciting, but special nonetheless. Every year around this time, your favorite eats and sweets begin to pop up looking a little more verdant. For the past few years, Krispy Kreme has hopped aboard this trend with its green donuts. In honor of the upcoming celebration of all things Irish, Krispy Kreme has restyled its classic donut and made it green.

Unlike some competitor's St. Patrick's Day donuts, the Krispy Kreme "O'riginal" Glazed style aren't just topped with some shamrock-like frosting — they're ENTIRELY green. Like the dough is a pleasing shade of Kelly green. Further, between March 15 and 17 (Friday to Sunday), Krispy Kreme is giving customers the opportunity to win something called a Golden Dozen Pass. Lucky customers will walk away with a coupon for a free dozen donuts every week until NEXT St. Patrick's Day in 2020.

Theoretically you could create something pretty similar to the Original Filled doughnuts available exclusively in the U.K. You just need some Nutella and and Original Glazed. But, creating a green donut is only to be tried by the experts. So, who is the real winner here?