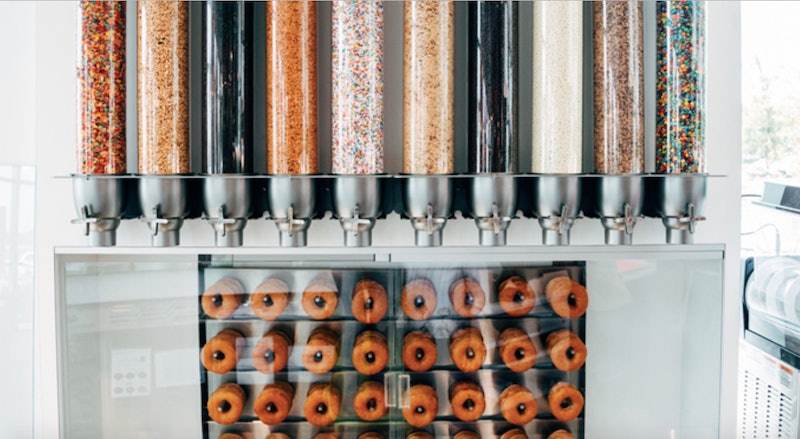 Although it is physically impossible to bite into a Krispy Kreme doughnut and feel disappointment, now the chain is offering a new way to elevate your dessert experience. Starting July 23, you can now customize your own Krispy Kreme doughnuts, in a test of power and free will that I am honestly not sure if we, as humans, are ready to handle. Whatever the case, to find out you're going to have to venture to the chain's Concord, N.C. location to find out, since it is the first (and as of right now, only) location letting customers pick and choose their own flavor combos, in addition to a bunch of other exciting menu tests.

But first, the customized doughnut lowdown: per a press release, guests will be able to "build their own doughnuts with a combination of five different glazes, 10 toppings and five drizzle flavors," which, according to math, leaves you with a whopping 250 combinations at your disposal. The press release didn't specify exactly what those glazes, topping, and drizzle flavors would be, but that has not stopped me from inventing a chocolate-glazed Reese's and Oreos-topped sea salt caramel-drizzled monstrosity in my head. (Is anyone else suddenly ridiculously hangry?)

Also on the horizon for Krispy Kreme fans? Ice cream. First up to bat are the Scoop Sandwiches which are "Original Glazed Doughnut infused ice cream, scooped between a sliced doughnut with a combination of toppings and drizzles." Those doughnuts, per Krispy Kreme, include "Vanilla Sprinkled, Triple Chocolate, Cookies & Kreme, Vanilla Chip, Chocolatey Caramel Coconut, and Vanilla Fruity Crunch," so basically you are obligated to go back as many times as it takes to try them all. The chain will also be offering hand-spun milkshakes, which come in "Vanilla Glazed, Double Chocolate, Salty Caramel, Classic Strawberry, and OREO Cookies & Kreme," and all come topped with — ya guessed it — a Krispy Kreme doughnut.

“This new shop experience honors the heritage of Krispy Kreme while at the same time acknowledging and addressing the rising expectations of our customers,” said Andy Skehan, president of the Krispy Kreme Doughnut Corporation, North America, in a press release. “From our time-tested process of producing the world’s most loved doughnuts to our new Original Glazed Doughnut infused ice cream, we’re very excited for what the future holds.”

For those of us who are not conveniently in Concord or Concord-adjacent, there may be some promising news on the horizon; Krispy Kreme mentions plans to open 45 new shops across the U.S. in 2020, some of which will be entirely new markets to the chain. The press release doesn't confirm whether or not these locations would incorporate this DIY doughnut situation or the new ice cream menu, but maybe, just maybe, it will be enough of a success that we'll see this become the new Krispy Kreme norm. Sure, personalizing your own doughnuts may take a little longer than swinging through one of Krispy Kreme's iconic drive-thrus, but in the time-space-doughnut continuum, isn't it worth it in the end?