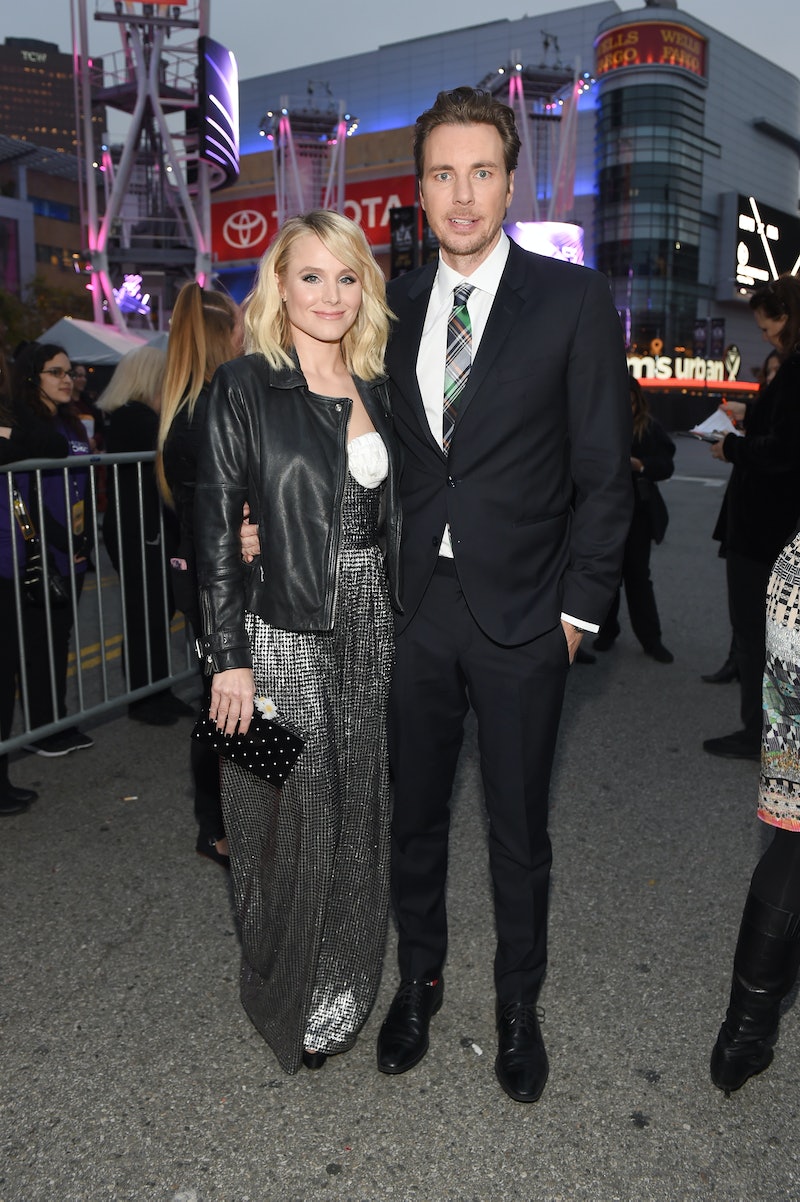 The internet may have had a field day over claims that Dax Shepard supposedly cheated on Kristen Bell, but The Good Place star is unfazed. In an Instagram Story posted late Thursday night, Bell praised her husband, calling him "the man of my dreams." It appears that Bell is unbothered by the Shepard cheating rumors — and her message says a lot without actually addressing it. Meanwhile, Shepard has already denied the reported affair.

In Bell's video, which appears to have been filmed as she and Shepard were getting ready for bed, she asks what he's getting her for Christmas. At first, Shepard doesn't want to spoil the surprise. But at his wife's insistence, he reveals that his holiday gift to her is a cordless Dyson vacuum. "He is truly the man of my dreams," Bell jokingly wrote atop the video. "The #cordlessdyson is lit."

As the proud owner of a cordless Dyson vacuum, I can attest that it is, indeed, lit; it will no doubt be an extremely useful addition to their household. But it's not the message of the video that's significant here: It's the fact that Bell is showing that her relationship is on solid ground. She's not addressing the cheating rumors at all, and the report doesn't seem to have caused any tension between her and Shepard. Instead, they're just goofing off and talking about the holidays.

The rumors about Shepard's reported "affair" started on Thursday, when Julie Andrews' step-granddaughter Kayti Edwards shared photos of her and Shepard with The Daily Mail. Edwards claimed to the outlet that she and Shepard hooked up in 2009 at a party, even though he was already dating Bell at that time.

Shepard, for his part, was quick to fire back. In an Instagram post that featured a screenshot of the Daily Mail article, Shepard wrote that the photos of him and Edwards were from 2005, before he even met Bell. He made a joke about the whole thing, too, writing,

"Hey Daily Mail, that photo is 13 years old, not 9. Also, Kayti has sold stories to tabloids about Matthew Perry, Jack Osbourne, Kid Rock, and now me. I look forward to her next one. Fingers crossed it's about my #1, Brad Pitt :)"

While Shepard addressed the report head-on, it looks like Bell is going to stay out of the whole situation. Still, her latest Instagram Story suggests she's not bothered by the reports and that the claims are totally insignificant to her and to their family.

Plus, since Shepard claims the photos are 13 years old, that means they wouldn't actually overlap with his and Kristen Bell's relationship timeline at all. The two actors met in 2007 and got engaged in 2009. They didn't get married until 2013, though, waiting until the Supreme Court legalized same-sex marriage to tie the knot, in support of their LGBTQ friends. Shepard and Bell are also parents to two daughters, Lincoln and Delta.

It looks like Shepard and Bell's relationship is still on very solid ground, cheating reports be damned. Now all that's left is for Bell to reveal the holiday gift she's giving Shepard, and the circle will be complete.