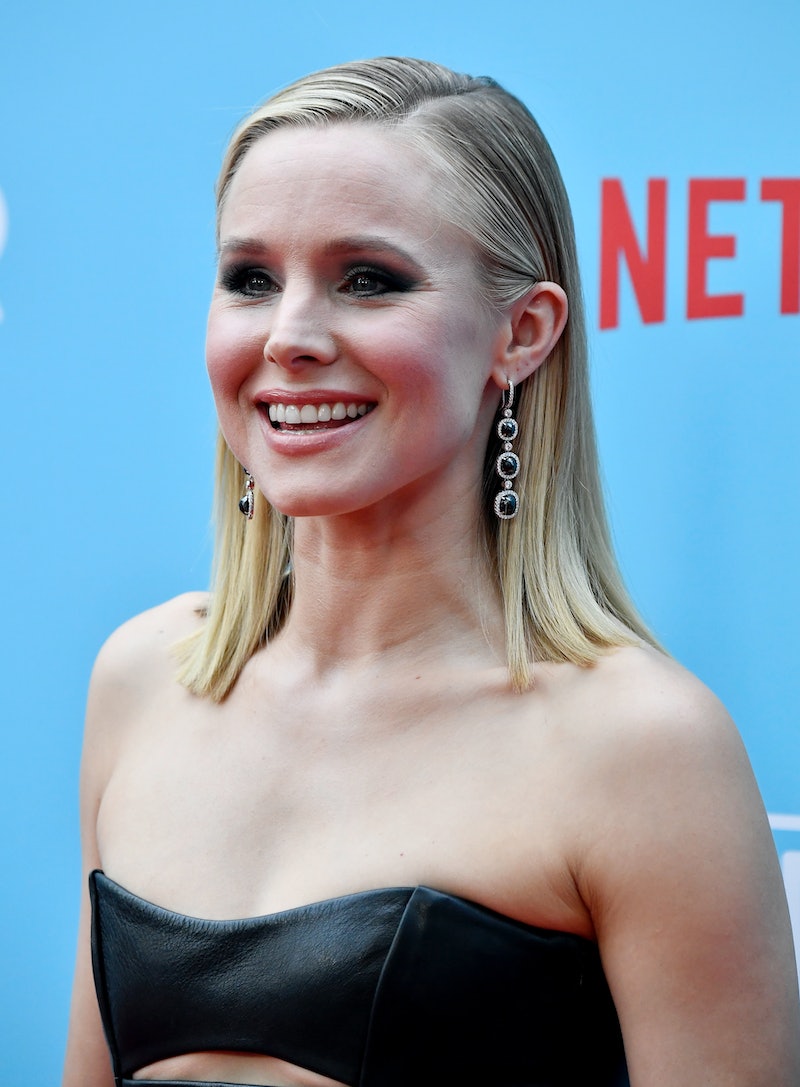 It's been five years since Frozen came out, but fans are still obsessed with the hit movie. Even Kristen Bell's daughter loves singing "Let It Go." The Good Place actor posted an Instagram video on Wednesday of one of her daughters belting out the award-winning song originally sung by Idina Menzel. Clearly, Bell's daughter isn't afraid to let her voice be heard, because she is literally shouting the song from the top of her lungs. It's so cute and also so hilarious.

As you can watch below, Bell's daughter is standing in her underwear with a baby doll at her feet, all while jamming out to the popular song. At the end, she even lets out a tiny little scream, which is adorable. She is clearly feeling the song and having a blast. And leave it to Bell to create the perfect caption. She wrote, "No pants, no problem. The show must go on!!! #frozen ❄❄❄ (A good wedgie always helps me hit the high notes, too)."

It's unclear which daughter is featured in the video. It's either Delta or Lincoln, but it's no surprise she didn't name her. Bell and Dax Shepard are extremely protective over their children, especially when it comes to shielding them from the paparazzi or sharing photos of their faces. Really, a name isn't necessary. The video is just as amazing without details. Let's be thankful Bell even posted the footage for fans to enjoy.

It's funny to see Bell's daughter embracing "Let It Go," especially after the Like Father actor told Jimmy Kimmel in March 2016 her kids aren't the biggest Frozen fans. "It’s that, and they don’t watch much TV," she explained on Jimmy Kimmel Live! "I mean they’re 1 and 3. They’re new to it all. But [the 3-year-old] was sick last month and Dax had said, 'Should we put on a movie? Should we blow her mind and put on Frozen?' And we did, and about 15 minutes in she said, 'Mummy, I think you should turn this off.' She didn’t like it."

In March 2016, Bell also told the same story to Yahoo about how much her kids aren't into Frozen. "They don’t really watch TV yet," she reiterated. "The 3-year-old [Lincoln], we showed it to her on a sick day about a month ago, she didn’t like it. She said, 'I would rather not watch this.' It was a little too scary for her, I think." The former Veronica Mars star added, "I think I’m [in] the only household with kids that’s not inundated with Frozen stuff."

Sometimes Bell's kids even break Frozen ornaments. In December 2017, Bell shared a photo on Instagram of Anna's head broken off. She hilariously captioned it, "This will be the cover of my autobiography and it will be titled 'My children keep me grounded.'"

A lot may have changed sine Bell gave the above interviews and Anna's lost her head. Maybe her daughters have changed their minds about the Disney movie? Or maybe they (well, at least one of them) now like the music? Whatever the case, it sure seems like the Bell-Shepard home has become somewhat of a Frozen household.