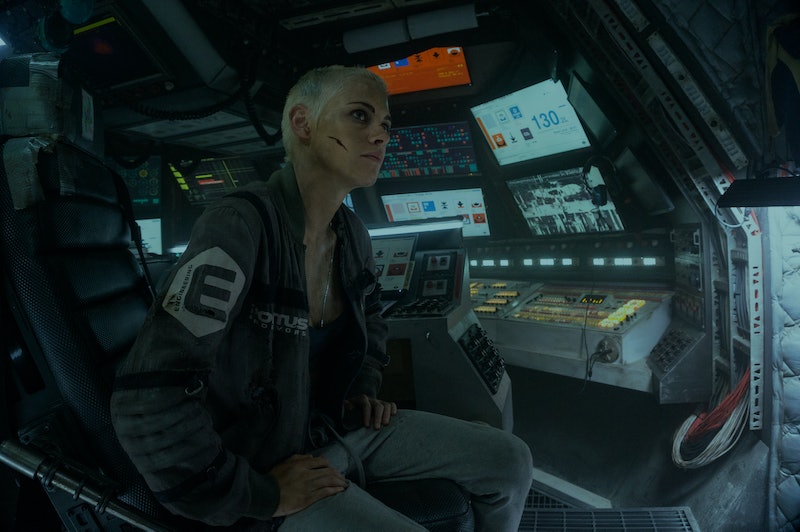 While Kristen Stewart's new film, Underwater, might seem like a submerged take on Alien, there's one crucial difference. Yes, Stewart's heroine is a tough-as-nails, take-no-prisoners woman who encounters a freakish monster. However, while Alien fell into the "final girl" subgenre of horror films — when there's only one woman still alive by the end of the movie, who's left to murder the villain — Underwater steers clear. Speaking with Bustle, Kristen Stewart explains how Underwater avoided the final girl stereotype, by not falling into the trap of pitting women against other women.

The final girl trope, typically found in horror/adventure films, isn't inherently bad, but it's certainly limiting for its female characters. And, in a movie like Underwater, which only starts out with two women to begin with, it can make it easy to cheapen the supporting actress' narrative arc. (What's the point of developing a character you're going to kill off anyways?)

Though the finished film avoids the final girl stereotype, Stewart — who plays Norah, a mechanic working on an underwater oil rig — says that the original script wasn't without its problems. When she initially signed on to the deep sea horror movie in 2017, Stewart found the script to be "super foundational." But rather than deterring her from the project, she saw it as an exciting opportunity for collaboration. "The characters were not overly drawn," Stewart says. Yet after meeting with director William Eubanks she saw what the film could be. "I was like, f*ck it, let's do it," she says.

Much of Stewart's input on the script came by way of suggestions to improve the dynamic between Norah and Emily (Jessica Henwick), a research assistant on the rig who's also trying to escape the deadly deep sea monsters, after the vessel begins collapsing. "I hated the idea that they were adversaries, that they didn't like each other," Stewart says. "I wasn't really interested in perpetuating a sort of typical... archetypal cliché story of two girls being competitive."

"[Emily], in really initial drafts of the screenplay, was treated like sh*t," Stewart says. "There was just constant belittling of this girl who didn't know anything, and I was like, 'This is really f*cked up.'" But, the actor says, it felt familiar. "It also read really normal, it read like, yeah, that's usually how it is, but let's change that."

Stewart's reimagining of Emily and Norah's dynamic ultimately helped Underwater turn the final girl trope on its head. Because they built a relationship throughout the film — spoiler alert — Underwater doesn't have a final girl, it really has two. Emily and Norah support each other and, in one especially frightening encounter with deep sea monsters, work together until the end. (Though audiences will have to watch the movie to see if they ultimately survive or not.)

Or as Stewart puts it, "We actually get to a point where we value each other, and can actually see each other because we're [finally] visible to one another." Farewell to the final girl.

More like this
Michelle Williams Laughs Often About Motherhood Thanks To 'The Fabelmans'
By Marina Watts
In 'The White Lotus,' Leo Woodall Gets His Moment
By Gabrielle Bondi
Elizabeth Debicki On Her Approach To The Most Debated Scene From 'The Crown'
By Grace Wehniainen
Keke Palmer Paid Tribute To "Other Half" Darius Daulton After Announcing Pregnancy
By Jake Viswanath
Get Even More From Bustle — Sign Up For The Newsletter