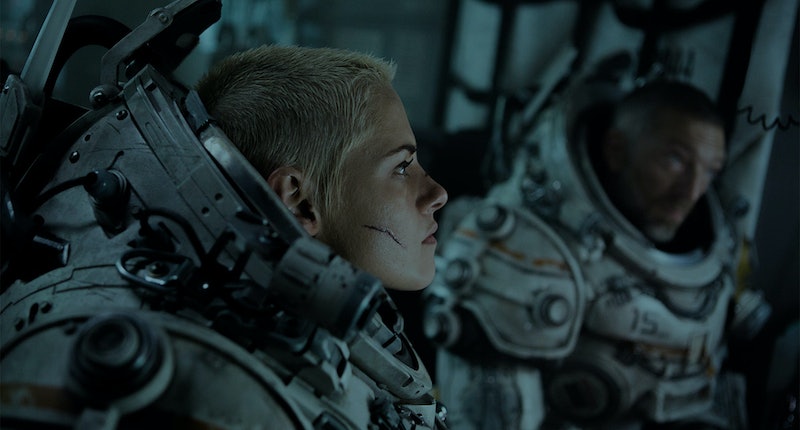 Kristen Stewart has had quite the varied career since the halcyon days of her Twilight stardom. Following the franchise's conclusion in 2012, Stewart went on to star in the French drama Clouds of Sils Maria, the action-comedy American Ultra, the psychological thriller Personal Shopper, and a number of other diverse films. Her latest is the sci-fi horror jaunt Underwater, in which she stars as part of a team of underwater researchers on a mission when something goes horribly wrong. So, on a scale of Edward Cullen to that animatronic doll that was supposed to play Renesmee, how scary is Underwater?

The movie definitely looks like it's leaning more toward the creepy Twilight doll end of the spectrum. The film is about a group of scientists and engineers who are conducting research from their station located at the bottom of the ocean. The idea of simply being in a station at the bottom of the ocean is scary enough for many people, but hold on, it gets worse. An earthquake strikes and severely damages the station, putting it on the verge of meltdown and leaving the crew little time to escape. With no other way out, they hatch a plan to walk across the pitch black ocean floor to another base. The journey is miles long, and they may not have enough oxygen to last the whole trip. Oh, and one more thing: the earthquake apparently awakened some hitherto unknown deep sea creatures, and they are very much the murdering kind.

With a plot like that, the movie should frighten several different kinds of moviegoers. If you're afraid of the ocean or of drowning, then the idea of being trapped at the bottom of the sea is downright terrifying. If you're claustrophobic, then the film's setting of a research station/underwater tomb should give you the willies. And if you're the type who gets scared by horror movie monsters, this movie is technically a creature feature and therefore should have plenty of beast-induced jump scares as well. Basically, Underwater features nearly every conceivable aspect you'll find in horror movies.

Part of what makes the film so scary is that most of what you're seeing on screen is real. Well, as real as it can be, anyway. The film's production utilized monstrous sets that contained vast underwater tanks, leading to some very palpable terror from the actors. "The whole building of tension and sense of peril, that stifling claustrophobia... they made a lot of these things happen on set," Stewart said in a featurette released by 20th Century Fox. "This movie was uniquely difficult. It was just really harrowing, and that was the goal. We didn't want to fake it, we wanted to get as close to real as possible."

The film also gets into the psychological horror realm thanks to some added inner turmoil experienced by Stewart's character. "She's in the midst of a grieving process, and the reason that she's self-isolated and spent her time on the bottom of the ocean doing a mechanical engineer job on an oil rig is because she isn't very happy or treating herself very well and she's at a loss," Stewart said of her character in an interview with ET Canada, according to CinemaBlend. "There's this fragile nature that this girl has, and you just never really know why. Information about her sort of filters out throughout the really traumatic events. That's where you start to kind of get to know each other, and the deepest parts of yourself come out."

It sounds as if Underwater is not for the faint of heart, and will likely rank as the most frightening film Stewart has made thus far in her career — creepy toddler dolls notwithstanding.