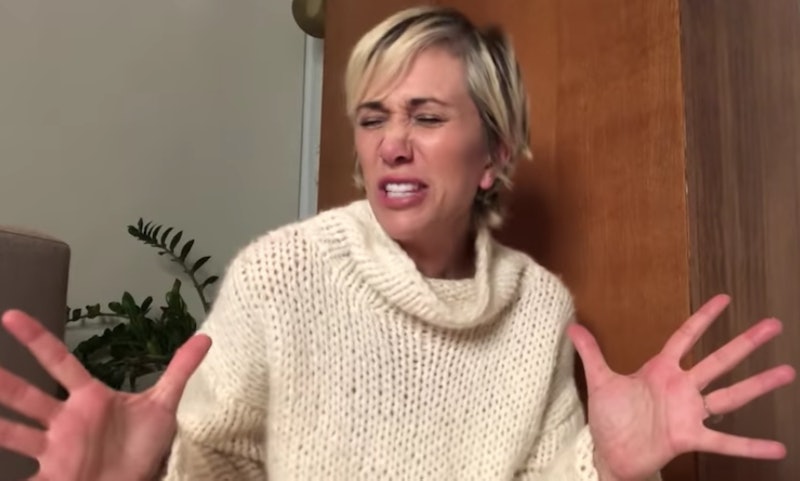 Eight years after leaving the cast of Saturday Night Live, Kristen Wiig returned to host the May 9 episode. She appeared onscreen in her pajamas pretending that she'd forgotten about her hosting gig. But she quickly returned in a sparkly black blazer and proceeded to high kick and jazz-hands around her home, channeling her 2012 sketch, "Liza Minnelli Tries to Turn Off a Lamp."

After doing a series of bizarre dance moves, Wiig asked the audience, "You want some biscuits with this tea?" before pulling up her shirt and flashing the camera.

The tone abruptly changed, however, as Wiig changed into a soft white sweater and slid sideways onto a fur rug to discuss Mother's Day. Surrounded by flickering candles, she wished her mother luck, joking that she was "in a competition over Zoom right now. And Mom, I hope you win! She actually sent a picture." The screen then showed a photo of Wiig superimposed over a muscle woman, with the words "Florida Muscle Lady" next to it.

Wiig then sang what at first seemed like a heartfelt lullaby her mother used to sing to her when she was a kid...only to devolve into a loud, Broadway-esque rendition. "My mom sang the same song...weird," Twitter user @GhoulsOut joked.

Later in the episode, Wiig played the host of hair YouTube channel "Bouncy Waves with PJ Charnt." During the sketch, PJ looked down at the camera so her red locks constantly fell into the screen and continuously reminded her fans that their hair would *never* look as good as hers.

It was a brief appearance, but fans were happy to see Wiig back at her old (virtual) stomping grounds. One viewer was hoping that since Fey and Wiig both showed up, perhaps Amy Poehler would make a cameo to complete the trifecta. But ultimately, Wiig was able to hold down the comedic fort herself with a song, a dance, and a whole lot of jazz hands.

More like this
Michael B. Jordan Tackled His "Public Breakup" With Lori Harvey On 'SNL'
By Brad Witter
The Black Lotus Staff Has "Had Enough" In The 'White Lotus' Spoof From 'SNL'
By Brad Witter
Who Is Pete Davidson Dating? He & Chase Sui Wonders Got Caught Kissing
By Jake Viswanath
Twitter Has Renamed Ekin-Su After *That* 'Dancing On Ice' Performance
By Sophie McEvoy
Get Even More From Bustle — Sign Up For The Newsletter
From hair trends to relationship advice, our daily newsletter has everything you need to sound like a person who’s on TikTok, even if you aren’t.