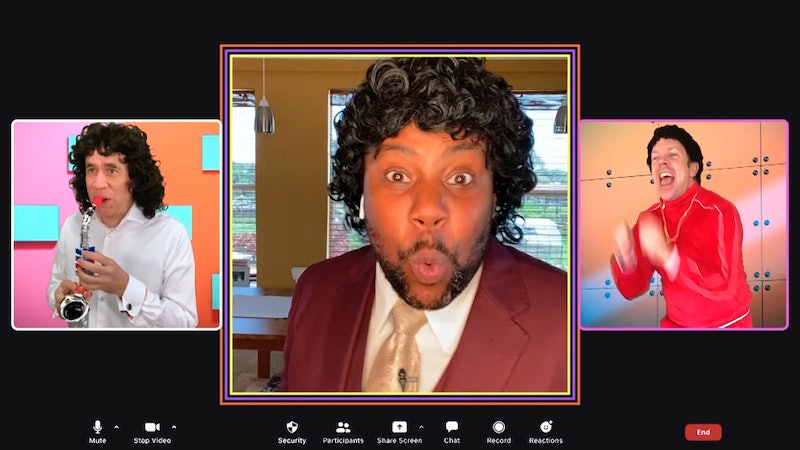 The show must go on, but the season must also come to an end. Saturday Night Live has set its season finale with another at-home episode. The Season 45 finale will air this Saturday, May 9, as announced by the show's official Twitter account on May 7. It will mark the third — and hopefully final — episode of SNL that has been produced remotely, with all of the writers and cast members working from home, due to the ongoing coronavirus pandemic.

The show released a teaser to confirm the exciting news, featuring Kate McKinnon, Pete Davidson, Aidy Bryant, and more as they deal with falling cameras, faulty green-screens, and the other technical difficulties that come with having to film skits at home. It's a blooper reel in itself, and fans who have watched the previous at home episodes might even be able to guess the sketch from the mishap.

No host or musical guest have been confirmed for the finale yet, but if the previous two at-home episodes are any indication, they will be kept secret until the episode airs. The first edition on April 11 was "hosted" (which now means he kicked off the show) by Tom Hanks, who had recovered from coronavirus himself, with musical guest Chris Martin of Coldplay. Brad Pitt took hosting duties on the April 25 episode, giving an expert impression of Dr. Anthony Fauci, with Miley Cyrus performing from home.

Aside from the A-list hosts and musical guests, SNL's at-home episodes have featured surprise cameos from a bevy of stars, including Paul Rudd, Bad Bunny, and Adam Sandler (with bonus cameo from Rob Schneider, who appeared through Sandler's window). Given that the next episode is the season finale, the possibilities of celebs who could randomly appear onscreen is endless.

And if you still want more SNL after the season is over, then you're in luck. The show will air a Mother's Day special on Sunday, May 10, just a day after the finale, entitled A Saturday Night Live Mother's Day. The one-time event will feature mom-themed skits from across the show's 45 seasons, making the perfect watch for moms and their loved ones stuck at home (especially if you're not quarantined together).

SNL has not officially set a fall premiere date for Season 46, but let's hope the show is back in Studio 8H by then.

More like this
'SNL' Shared An Exclusive "Sneak Peek" Of 'House Of The Dragon' Season 2
By Stephanie Topacio Long
Who Is Pete Davidson Dating? He "Courted" Emily Ratajkowski At A Knicks Game
By Jake Viswanath
Nicola Coughlan Just Shared A Major Update About 'Bridgerton' S3
By Sam Ramsden
Everything To Know About 'Elite' Season 7
By Jake Viswanath
Get Even More From Bustle — Sign Up For The Newsletter