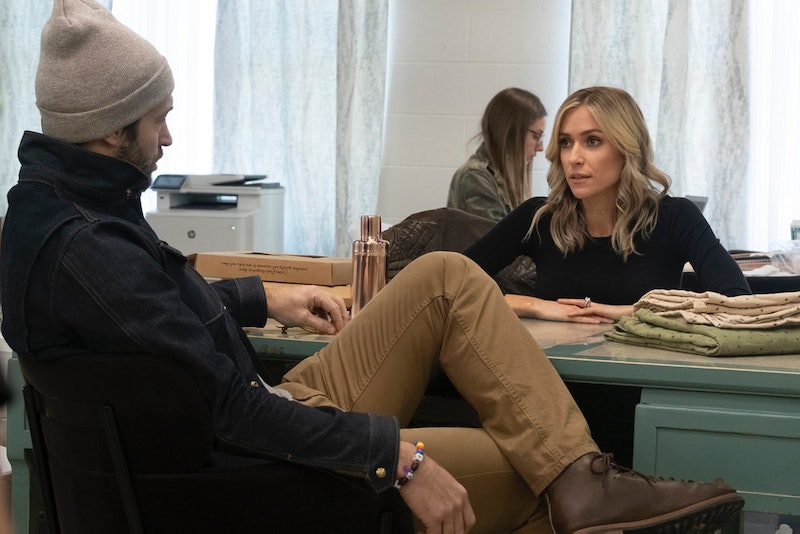 You can always count on Kristin Cavallari to keep it real. And Kristin's comments about marriage on Very Cavallari were seriously so refreshing to hear. Because partnering with anyone — let alone Jay Cutler — for life isn't always easy. The April 7 episode welcomed Kristin's friends from Los Angeles to spend the weekend in her (other) Nashville home for some much needed bonding that they haven't had the time to indulge in since Kristin's wedding in 2013. She invited them to stay in her old house, which hadn't sold yet (and was still fully furnished) because the new one didn't have the space for them to stay. They all gathered around the living room fireplace, sleepover-style, to roast s'mores and, of course, talk about love.

Kristin's best friend Kelly and their friend Biegs are the single ones of the group. They talked about how difficult it is to find "a decent guy" these days, and Kristin's friends gushed over how "perfect" her relationship with Jay is. "Not everybody gets that," her friend Justin commented. But Kristin made sure to let them know her relationship isn't always butterflies and rainbows.

In fact, in the show's previous episode, she told Brittainy that she and Jay were kind of in "a funk."

"From the outside things are so perfect and things are so great," Kristin told her friends. "But actually, like, they're not. And that sucks." Her friends gasped with horror. "That's the thing though, with marriage. It's ups and downs. Like right now, we're in a low, but in two months we could be up here again. I mean that's how we've always been our whole relationship. It just is what it is."

In a #relationshipgoals world, it's easy to develop unrealistic expectations in a relationship. So having that reminder from Kristin kind of acts as a sigh of relief.

"There's no such thing as a perfect relationship," she said. "I mean, Jay and I have problems. I've always been very vocal about that. We have to work at our relationship. So hearing them say that we're perfect, it's just kind of silly to me."

The group later held a dinner party with a few additions, including Jay. They had been drinking all day, though, so when dinner came around, some were in rare form — particularly Jay. He kept giving snide, one-off remarks whenever Kristin would say something, and he also escaped to the living room to be on his phone when everyone else was at the dinner table. Kristin was embarrassed. "I'm hiding," he said, getting up from the dinner table. He was obviously a little tipsy and in a bad mood — the mood Kristin calls "Les Mis."

Kristin was frustrated, but refused to let such a tiff ruin her special weekend. She carried on and they talked about it later after her friends left. "There was obviously little moments that weren't so great," Kristin brought up to Jay. He agreed. "It didn't go exactly how it was planned," he said. "I was excited to have everyone together," Kristin said. "It was just a huge letdown. It was just... not a great night, you know? And so, I'm kind of disappointed in how it went."

Rather than getting defensive, Jay understood. "Rightfully so," he said. "It wasn't my best effort. I apologize, and I'll obviously do better next time." Kristins shrugged, "Problem solved."

Obviously, not all marital issues can be worked through in such a simple walk-in closet convo, but Kristin and Jay set a good example of how problems can be approached in real life. And in a reality TV genre where real and not-so-real are easily and often muddled, that's something to be appreciated.