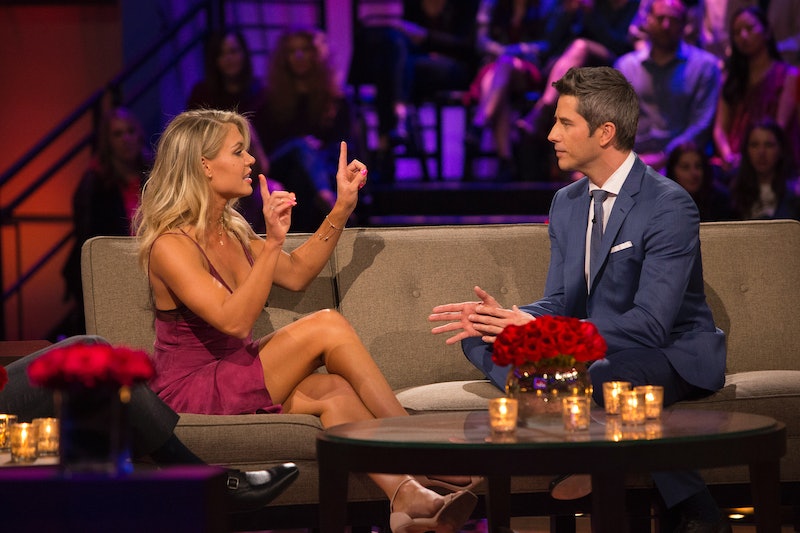 Krystal and Arie's tumultuous and confusing relationship was one of the things that has made this season of The Bachelor so strange to watch. Krystal was never a hit among the other women at the house, and she seemed weirdly put off every time Arie interacted with other contestants. Yeah, it's going to suck seeing the guy you're pursuing be whisked off by other women, but you're also on the freakin' Bachelor. That's kind of how it works. Krystal remained on the show for way longer than many thought she should have, because Arie seemed to still see something in her where the rest of us didn't. But Krystal and Arie's relationship after The Bachelor does not seem to be going so well, despite the bond they once apparently shared.

In a recent interview with People magazine, Krystal made it clear that she has still not gotten over the infamous bowling night meltdown. On the night that seemed to signal the downfall of Arie's interest in Krystal, she was extremely displeased when Arie decided to invite the rest of the girls on a date after only half of them had won the privilege in a bowling competition. Krystal refused to attend the evening's events and had some pretty uncomfortable conversations with Arie in the midst of them. “The thing at the bowling alley was just my tipping point,” Krystal told People. “I’d been putting so much effort into him, and there was so much s– in the house and I was just there for Arie. When he changed his mind, some people think that’s an overreaction. I only had his word. I was pretty much done. I packed my bags that night.”

Krystal apparently maintains that Arie allegedly "disrespected" her, not only because of the bowling date incident, but also because of all the group dates when he... well... interacted with anyone else. “For instance in Tahoe, I was talking with Arie and he grabbed Tia’s hand while having a conversation with me," she continued in the same interview. "I felt so disrespected. All the girls were fighting over each other to hold his hand and to kiss him. I was like, ‘This is desperate — I’m not going to do this.’ I would never tolerate that in the real world.”

While feeling attacked every time the Bachelor interacts with other women in front of you doesn't seem particularly reasonable, I can empathize with Krystal a bit. Maybe she didn't quite know what she was getting into when she signed up. It might be easy to think to yourself, "I could handle watching other women compete for the same guy as me," and then quickly change your mind once you're in the situation. Sure. When it comes to Arie, though, he doesn't seem to be holding onto whatever he saw in her early on. Their onscreen dynamic began to crumble when he found out Krystal was talking about him to the other women, and he eventually sent her home.

In one of his weekly blogs for People shortly after he booted Krystal, Arie detailed why he wasn't able to get past the drama of their post-bowling fight. "I wanted to give myself a chance to get over that incident and see if we could recover, but none of her apologies were able to repair what was broken," he wrote. "Though I once had very strong feelings for her, those feelings were now gone. It was time to say goodbye. Ultimately, I had to remember why I came on the show in the first place. I was here to find a wife, not a drama queen."

In another People magazine article, Arie also said he didn't care about her "villain" perception, but he felt like they weren't ever on the same page as far as their feelings and dynamic went. "You need good communication," he said. "I feel like her perception of our relationship was completely different than mine.”

It seems clear that once the women reunite with Arie this week for a sit-down chat about the time on the show, viewers are in for another fight between him and Krystal. There appears to be some tension and arguing going on in early press photos for the episode. Viewers will have to tune in to see what the hubbub is all about, but in the meantime we can rest easy knowing that Krystal and Arie likely never would have worked out, and that's probably for the best for both of them.