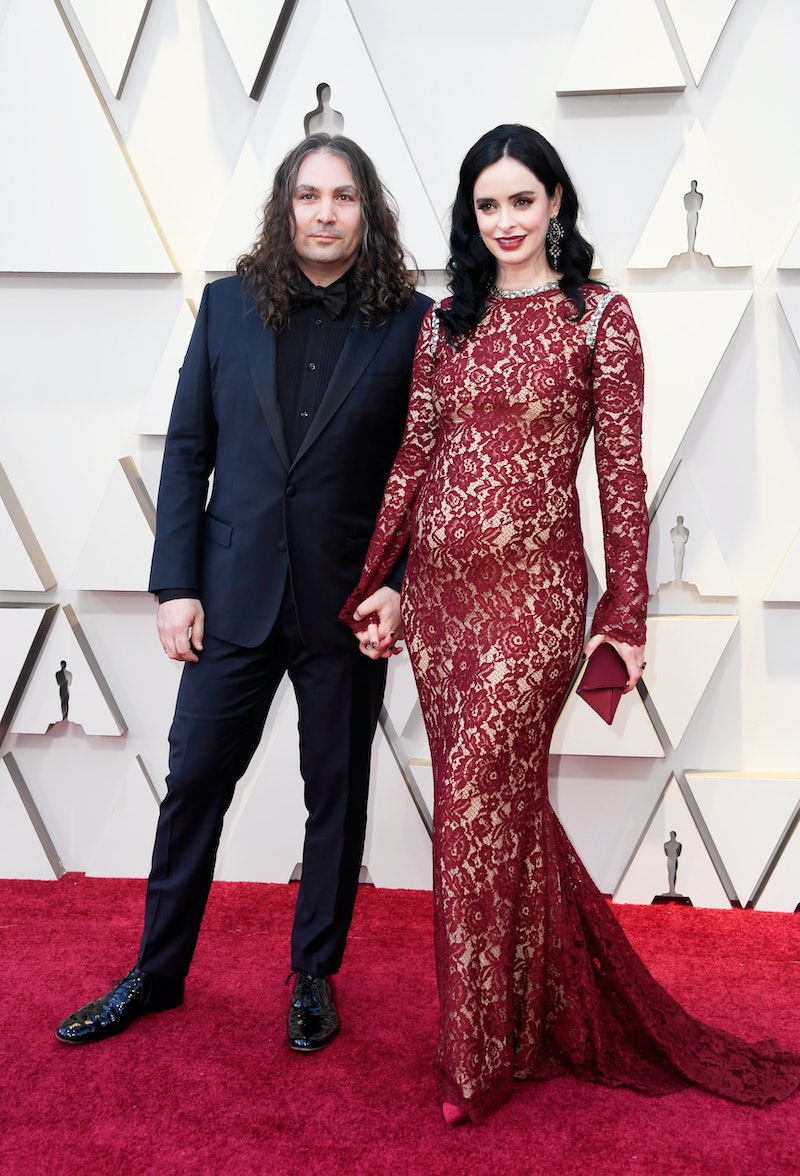 The Academy Awards red carpet was full of breathtaking looks as always, but no one surprised fans more than a very pregnant Krysten Ritter on the 2019 Oscars red carpet. She and longtime boyfriend Adam Granduciel managed to keep the news of their first kid together a secret for months, judging by the size of her bump, but making the announcement, wearing a gorgeous Reem Acra gown, on Hollywood's biggest night was definitely the way to go.

The 37-year-old Jessica Jones star has been dating Granduciel since 2014, according to The Daily Mail. Ritter is usually pretty private about her personal life in interviews, rarely mentioning her beau, so it makes extra sense that she didn't immediately take to social media or something to share her pregnancy news. It must be an exciting time for Ritter, given that just last week, it was announced that Netflix was canceling her Marvel series once Season 3 airs later this year. That's a lot of major life changes happening all at once.

Although she didn't seem too broken up about it on social media. Once it was announced, Ritter posted a picture of her with the cast and crew on Instagram, captioning it, "Taken a few weeks back at the table read for our SERIES FINALE. I love these people to the moon and back. It has been a dream to play Jessica alongside my amazing cast and the best crew in the business for these past 5 years. I am so grateful for every second of it."

Although it's sad for fans that Jessica Jones won't be returning after this upcoming third season, Ritter will likely find herself as busy as always — and not just because she'll have an infant on her hands.

This is a woman who works all the time. Ritter has her own production company, Silent Machine, that aims to highlight female protagonists. In 2017, the Pop Network ordered a pilot from the company, as reported by Variety, though there are no more new updates about its status.

Ritter also had her debut novel Bonfire published last year. She told The Hollywood Reporter that it was a different sort of creative outlet for her. “I love my acting job more than anything, but I get in my car when I’m told and I act when someone says, ‘Action.' I have to harness that creativity on someone else’s time. This was a way to do it on my own time. That said, I still had a hardcore deadline," Ritter said.

Ritter told Elle that the novel, which is about a young lawyer who returns to her hometown to investigate a huge corporation wreaking havoc on the small town, was a chance for her to write the kinds of characters she wants to see out in the world, much like Jessica Jones was to her. She said that she never has any intention of sitting around "waiting for the phone to ring." "I'm a really proactive girl. I don't wait for people to tell me," Ritter added.

With a baby on the way and Jessica Jones Season 3 press tours looming, Ritter certainly has a lot on her plate. But fans should be contented knowing that Ritter will always find a way to keep working and bringing great things into the world — even if she makes fans wait to hear about them.