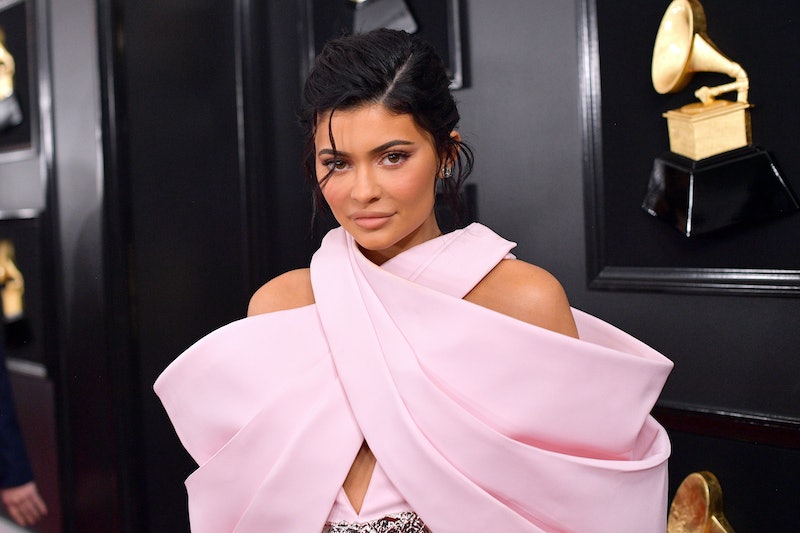 There have been more than enough rumors swirling around the Kardashian family lately, and now Kylie Jenner is clearing at least one of them up. In a lengthy interview with The New York Times, the Kardashian-Jenners covered a wide range of topics, and that included Kylie addressing the Jordyn Woods lip kit going on sale shortly after the Woods and Tristan Thompson cheating scandal made headlines in February.

Kylie and Jordyn are so close that the Keeping Up With the Kardashians star has named several beauty products after her best friend, including The Jordy Lip Kit. Just three days after it was reported by TMZ and Hollywood Unlocked that Thompson had reportedly cheated on Khloé Kardashian with Woods at a party in Los Angeles, the lip kit's price was reduced by 50 percent on the Kylie Cosmetics site, per The Cut. (Bustle previously reached out to reps for Woods, Kardashian, and Thompson for comment on the situation, but has not heard back.)

At the time, fans speculated that it was a calculated move on the makeup mogul's part. However, Kylie told The Times that she had nothing to do with the price cut, and as soon as she found out about it, she called an employee. It turns out that the lip kit's packaging is changing, which prompted it to go on sale. "That is just not my character," Kylie said. "I would never do something like that and when I saw it, I was like, thrown back. Jordyn knows I didn't actually put it on sale."

Fans ran with the idea that the price cut was a response to the scandal, and even left negative reviews on the lip kit in response. According to Page Six, customer reviews included one that said, "Be mindful of the shade as wearing it may lead to biting the hand that feeds you." For Kylie, it sounds like it was just one more thing to worry about during a difficult time for her, her sister, and Woods.

On March 1, Woods sat down with Jada Pinkett Smith on Red Table Talk to discuss her side of the story. She said that while Thompson did kiss her, nothing else intimate happened between them. She added that the media was "putting their focus on a young black woman who has made a mistake, and not a mistake that's worth public crucifixion."

For her part, Khloé has spoken out about the situation multiple times via social media. Most recently, she addressed her feelings in a March 2 tweet that read, "What's been harder & more painful is being hurt by someone so close to me. Someone whom I love & treat like a little sister. But Jordyn is not to be blamed for the breakup of my family. This was Tristan’s fault."

Meanwhile, Kylie's response to The Times is a rare instance of her touching on the subject. Rumors have also circulated that Kylie took a step back from filming KUWTK in the wake of the scandal. On March 27, a source told Us Weekly, "Kylie took a little break from filming Keeping Up With the Kardashians, and recently got back into filming and it's been a struggle and difficult. She was very upset about the situation with Jordyn and also just didn't want to deal with it and have to address it."

It's not clear if Kylie did take a break from filming, but it would be totally understandable if she did. As her comments about the Jordy lip kit illustrate, everyone seems to be waiting for her to publicly react to the situation. But right now the makeup mogul appears to be focusing on her family and processing things, rather than sharing whatever she's feeling with the whole world.