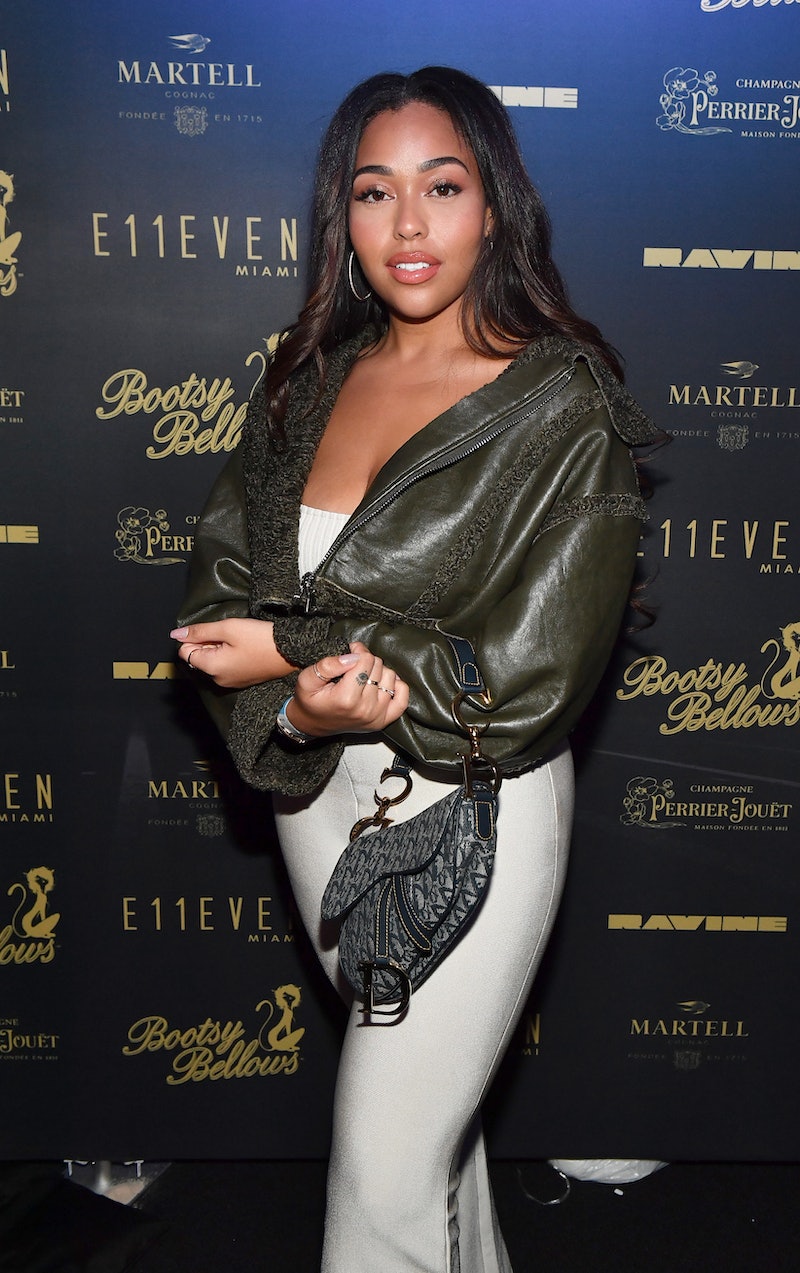 The week after the drama surrounding Khloé Kardashian, Tristan Thompson, and Jordyn Woods rocked the entertainment world, Kylie Jenner's BFF is now speaking out. In her first interview since the reports emerged, Jordyn Woods addressed the cheating scandal on Red Table Talk during an appearance on Jada Pinkett Smith's Facebook Watch program on March 1. And she was not holding back.

Woods had an incredibly open and revealing conversation with Smith, in which she detailed the situation concerning Thompson from her own point of view. Woods claimed that there was "never anything intimate" that went on between the two of them during their hangout at his house party. She said that "he didn't try to take me to a room, it was just an innocent time." (Woods also clarified during the interview that she and Thompson "never" slept together.)

Later in the interview, Woods did claim that Thompson kissed her when she left his house the morning after, but that there was "no passion" in the action. Woods said, "On the way out, he did kiss me... no passion, no nothing, it was a kiss on the lips, no tongue kiss, no making out." (Bustle reached out to Thompson's agent about Woods' latest comments, but did not receive an immediate response.)

She also revealed that she spoke with both Kardashian and Jenner on the morning following the incident. But when she spoke to the sisters, she left out some parts of the story — "I was honest about being there, but I wasn't honest about the actions that were taking place." Of course, following that conversation with the reality stars, she's been more than open about what supposedly took place between her and Thompson.

Woods expressed remorse about how the entire situation unfolded, especially in regards to how it's affected the Revenge Body star. She told Smith, "I did as much apologizing as I could do," when it came to how she addressed Kardashian after the situation occurred.

Even though Woods said that she should have never put herself in such a precarious position with the Cleveland Cavaliers player, she claimed that this situation really didn't have anything to do with Kardashian and Thompson's split, "I know I'm not the reason that Khloe and Tristan are not together." You'll recall that TMZ reported on Feb. 19 that the couple had split, presumably in light of these cheating rumors.

After the Red Table Talk interview aired, Kardashian spoke out on Twitter and refuted some of Woods' claims:

"Why are you lying @jordynwoods ?? If you’re going to try and save yourself by going public, INSTEAD OF CALLING ME PRIVATELY TO APOLOGIZE FIRST, at least be HONEST about your story. BTW, You ARE the reason my family broke up!"

Woods' recent revelations mark the first time that she's spoken directly about the situation since it was reported on Feb. 19. At the time, sources such as TMZ and Hollywood Unlocked first reported that Thompson had cheated on Kardashian with Woods at a Los Angeles party. Following those rumors, it was confirmed that Kardashian and Thompson had split. (Bustle previously reached out to reps for Woods, Kardashian, and Thompson for comment on the situation, but has not heard back.)

Prior to her Red Table Talk interview, Woods kept rather mum. Even though she refrained from discussing the matter publicly in any major way (until now, that is), she did address the issue on Feb. 21 during her first public appearance since the news broke. As E! News reported, Woods attended the launch of her eyelash line with Eylure and addressed the audience by saying, "Through everything that's been going on, you know it's been real, and Eylure has been super real." "Real" is definitely one way to describe this intense drama.

Considering there have been more than a few reports about this whole situation, it's definitely interesting for fans to finally hear Woods candidly and vulnerably share her side of the story.

More like this
A New Portrait Shows King Charles With William & Kate Before The Queen’s Funeral
By Stephanie Topacio Long
Holly Willoughby & Phillip Schofield #Queuegate Drama, Explained
By Sophie McEvoy
Stanley Tucci & Felicity Blunt’s Relationship Timeline Might Make You A Little Hungry
By Jake Viswanath
Kim Kardashian Reveals Her Response To Kanye’s Fashion Opinions
By Jake Viswanath
Get Even More From Bustle — Sign Up For The Newsletter