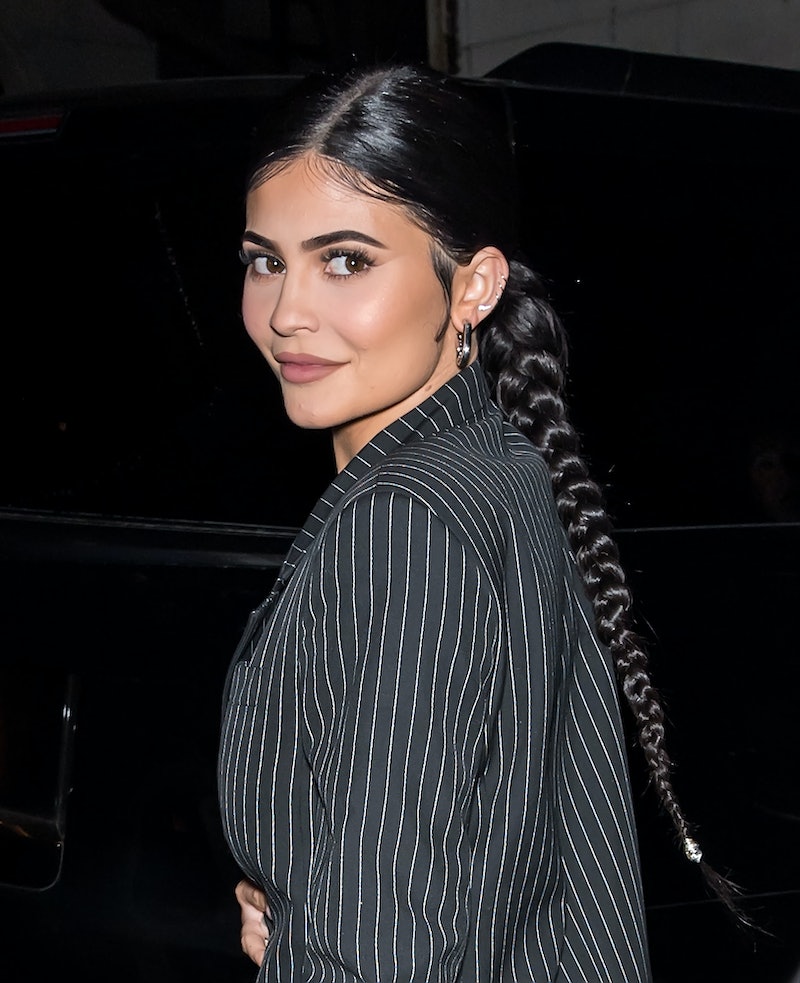 In another iconic addition to her arsenal of pop culture costumes, Kylie Jenner dressed up as Madonna for Halloween, and her best friend Anastasia “Stassie” Karanikolaou embodied Britney Spears. Together, they recreated the duo's legendary 2003 Video Music Awards performance, including the kiss at the end.

They started their Saturday at a J. Balvin concert with friends, and then when they got home, it was time for their transformations. Jenner shared a video on her Instagram Story in which she listened to Spears' 2007 song "Piece of Me" and got her hair washed and prepped for the costume — a black, corseted tank top tucked into tight pants, those tucked into heeled black boots. The look was completed by a blonde wig pulled into a low bun. It looked nearly identical to the ensemble Madonna wore onstage while singing the "Like A Virgin" and "Hollywood" medley in 2003.

So far, the besties haven't shared any photos of their full looks, which were designed by Bryan Hearns, but they did share a video of their mock performance on Instagram Stories. Karanikolaou dressed as Spears wore all white — a lacy top with thin straps, a frilly mini skirt, white wrist-length gloves with pearl bracelets, and knee-high white boots. They both held microphones while they danced and lip synced to "Like A Virgin," and they ended the show with a peck on the lips.

The on-stage moment between Spears and Madonna was choreographed. Christina Aguilera was there and got a kiss too, but hers was cut from the live stream. “It was weird,” she told People in October 2018. “And you know why they cut it? The cut away to get Justin [Timberlake]’s reaction.” Spears and Timberlake had recently ended their relationship. “I saw the newspaper the next day and it was like, ‘Oh — well I guess I got left out of that one,’” she said.

Jenner and Karanikolaou left Aguilera out too, but that's OK, because Jenner paid tribute to her with a Halloween costume back in 2016 in which she recreated the look from Aguilera's 2002 music video for her song “Dirrty." She nailed that one, too, with another blonde wig, a nose piercing, and red and black chaps.

It's no wonder Jenner continues to recreate looks from her favorite celebrities. She nails them every time, and well, the opportunities are endless.