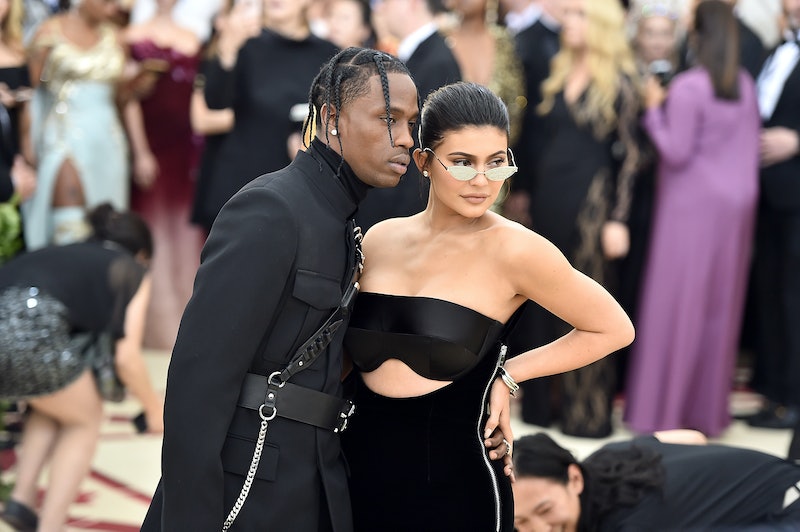 On Thursday night, April 25, Jenner and Scott simultaneously celebrated the release of Avengers: Endgame and the "Sicko Mode" singer's birthday (which actually falls on April 30, per Entertainment Tonight). To really get into the spirit, the couple dressed as Iron Man and Captain Marvel, or, should I say, "Iron Flame" and "Captain Lip Kit." It's pretty easy to see why Jenner went with the Captain Lip Kit moniker, given her uber-successful Kylie Cosmetics brand. Scott's Iron Flame alter-ego is a tie back to his La Flame nickname.

The Life of Kylie star posted numerous photos of the two, complete with their perfect, Marvel-approved get-ups, and wrote, "oh you didn’t catch iron flame and captain lip kit in the credits? sucks 4 you." Of course, Jenner and Scott's family photos wouldn't be complete without their own mini marvel, baby Stormi. The youngster appeared to be wearing a little Thor-esque costume herself, which, given Thor's mastery of the elements, is the perfect character for Stormi to dress up as. Iron Flame and Captain Lip Kit posed with their daughter, captioning the photo with, "happy end game everyone."

Jenner and Scott didn't just celebrate the rapper's birthday by donning Marvel-approved outfits, they also celebrated with their very own screening of Avengers: Endgame. On her Instagram Story, Kim Kardashian showcased a table of goodies that the family was munching down on, including a cake decorated with mini versions of Iron Flame, Captain Lip Kit, and baby Thor.

The cake featured a large "W," in the classic Avengers font, tying back to his real last name of Webster. It also highlighted the words, "Happy Birthday Husband," which is certain to help fuel those marriage rumors. Based on Scott's own post on his Instagram Story, in which he related that he watched Marvel's latest blockbuster with the family, his birthday party was a smashing success.

Scott is no stranger to paying homage to pop-culture favorites. On April 20, the rapper posted photos of his Game of Thrones-themed look, complete with armor that even Jon Snow would approve of. As TMZ reported, he donned the outfit in order to shoot a video for his song, "Power is Power," with SZA and The Weeknd, which is part of an upcoming album inspired by the HBO series.

The rapper captioned his post with some details about the "House of Flame," writing:

"Goddess K" couldn't help but comment on the photos with some flirty messages, writing both, "Oh lord Webster !!" and "Protect my realm."

Between their Westeros garb and their super Avengers costumes, it's safe to say that Jenner and Scott may just be the biggest fans of everyone's pop-culture faves.