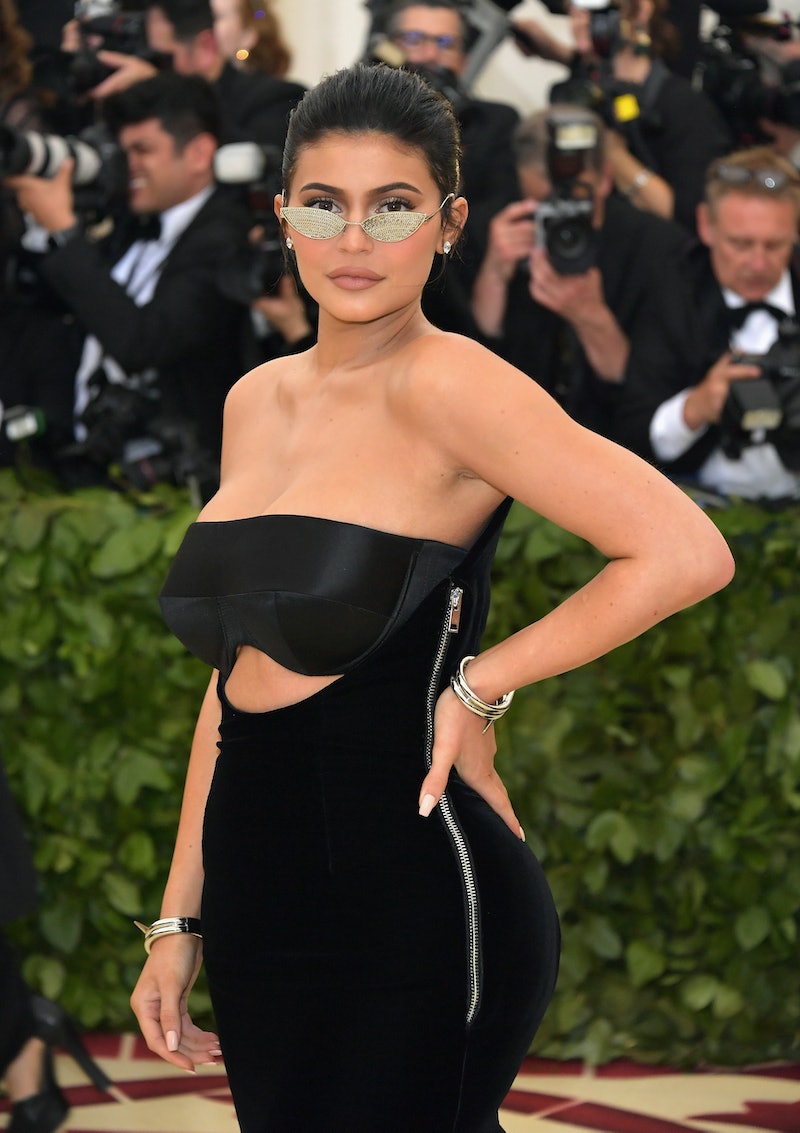 After months of being off the red carpet and slightly out of the public eye, the lip kit queen is back. Kylie Jenner's 2018 Met Gala gown was completely different than past years. In true Kylie form, it included sunglasses that you cannot see out of and cutouts. It's the first time she's stepped onto the red carpet since Stormi has been born, but she's not rusty. She hasn't missed a Met Gala in two years — and the third time's the charm.

If ever there's a day to make a red carpet comeback, it's the Met Gala. Jenner knows how to make a statement, too. She's rocked a see-through, flesh colored dress to every Met Gala that she's attended, but tonight was the night that she switched things up. Jenner made the all-black outfit her own by adding teeny tiny glasses that were covered in gems. Because no one needs to actually see, right?

It's also exiting to see what Jenner wears, but her hair is even more unpredictable than her outfits. She's constantly changing up her look — sometimes all in the same weekend — so it's always excited to see how she will style it. While she's always opted for a bob in the past Met Gala looks, she kept it simples with a low bun this year.

This is the first red carpet since having Stormi, so it's exciting to see how her style has changed in eight months off from red carpets. Honestly, not much has changed though. Jenner is still rocking her personal style as always.

Jenner has rocked two similar looks in her previous Met Gala appearances. This year she's straying away from the sparkle and structure and opting for an all-black look instead.

In 2015, Jenner showed up in a structured Balmain dress. The entire dress was covered in crystals, so there was no missing her. Making sure not to take away from the head-toe-toe lewk, if you will, she opted for a neutral lip and a classic smoky eye.

Jenner posted a photo on social media on Met Gala Monday of her 2017 look. You know, just to get people ready for her appearance. She wore the gorgeous Versace gown that stuck to the neutral, see-through theme that she has going on. She also reminded everyone that she carried a dainty little clutch and rocked a platinum blonde bob to go with it.

Get ready for the selfie ban to be temporarily lifted, because the social media queen is in the building. The last two times that Jenner went to the Met Gala, she got together with her squad to take their annual selfie. There's a good chance that this year will be no different. Even despite the heavy guard of the bathroom doors this year, you better believe that Jenner will get her snap.

Last year, she managed to get 16 people into her mirror selfie, including her sister Kendall Jenner and Kim Kardashian. The year before, they didn't quite fit as many people into the snap, so maybe this year will be bigger and better than ever. You just never know with Jenner.

It is worth noting that social media is banned from the Met Gala. Social media and, more specifically, selfies are not allowed at the event. Jenner clearly doesn't care about the rule though. She always finds a way to get her much needed selfie in when she needs it.

Jenner sure does know how to make a statement, especially on the red carpet. Although she's been to Coachella and has had her social media comeback, the 20-year-old is proving that she's still got it on the red carpet too. Here's to hoping she Snapchats her way through the event too.