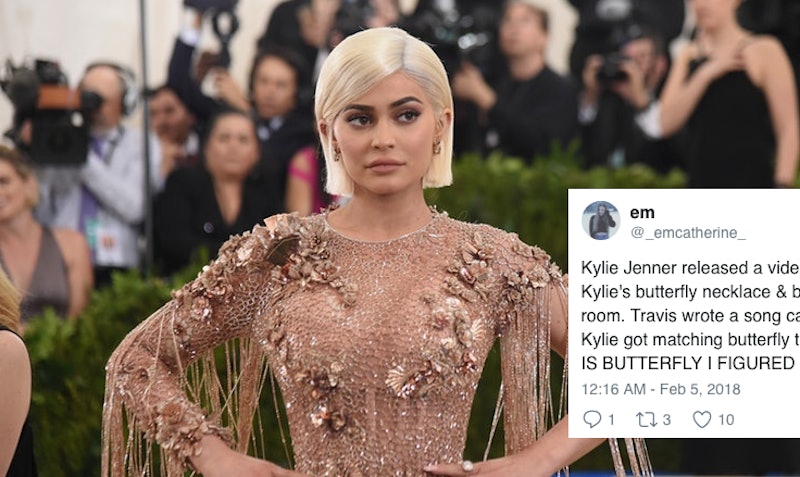 On Sunday, Kylie Jenner put pregnancy rumors to rest. The star posted a statement on Twitter and shared a video revealing the birth of her daughter and her pregnancy experience. But the announcement was missing some key details, including Kylie Jenner's baby's name. Some fans think that Jenner has already revealed her daughter's name, just in a less direct way.

EARLIER: Not long after the initial announcement, Jenner posted her 11-minute long video documenting the last nine months. And, as pointed out by Elle UK, social media sleuths are convinced that the star named her daughter Butterfly, and put hints about the name in the video. According to fans, there are lots of visual clues in the video and it's possible the reality star has hinted at this name for months. In fact, fans on Twitter think there are plenty reasons to believe that both Jenner and Travis Scott would want to name their baby Butterfly — or maybe even the Spanish word for the insect, "Mariposa".

Jenner hasn't made an official baby name announcement, and it may be a while before she makes this reveal. The star posted only a note explaining why she wanted privacy during her pregnancy, and that her daughter was healthy.

Her desire for privacy could continue now that she's given birth, so fans might have to wait to find out the baby's name. Jenner did give a glimpse of the past few months in the video titled "To Our Daughter". The vlog didn't appear to reveal the baby name — or did it?

The first clue Jenner gives is through the jewelry she wears. In the "To Our Daughter" video, she can be seen wearing the butterfly necklace that Scott likely gave for her 20th birthday. The camera does zoom in on the necklace, which could simply symbolizes the bond of their relationship, but it also could show that she already had her daughter's name picked out.

In November, the reality-star also posted a picture of butterfly rings and a pink manicure to Instagram. The rumors that Jenner was pregnant began in September, but remained unconfirmed. When she posted this image, fans were convinced she was having a daughter. Jenner might have been hinting at this after all, and based on the fan theory, it seems this could have revealed the baby's name with this post, as well.

Kris Jenner may also have hinted at her granddaughter's name. On Friday, Kris posted an ad for Jenner's new makeup product on Twitter and Instagram. The lipstick set is called the "Posie K Anniversary Lip Trio". This has fans thinking that "Posie" might be short for "Mariposa", which is Spanish for "Butterfly". It's possible that instead of "Butterfly", Jenner could be going with the same word in Spanish for her baby's name, and that Kris was dropping a major hint (as well as a promo for Jenner's brand).

The pink kits do launch for Valentine's Day, but they also fit with Jenner's decorating scheme for the baby. Decorations are the next hint that Jenner will name the baby Mariposa or Butterfly. In the video, one of the moments from Jenner's pregnancy shows the butterfly themed room for the baby. Here's a quick look:

There were butterfly decorations stuck to the pink walls, which could suggest that Jenner decorated the room with this name in mind.

Then, there are the matching butterfly tattoos Jenner and Scott reportedly had done together in June. An artist at Bang Bang Tattoo posted a congratulations message with a picture on Sunday. Scott also released a song last year called "Butterfly Effect", which some fans also feel is a sign.

Of course, there is the weird fact that Jenner is terrified of being around butterflies. In an episode of Life of Kylie that aired in September, the star visited a butterfly sanctuary at a London zoo. "It's kind of just ironic because I'm terrified, terrified of butterflies. All butterflies," she said on the episode. "This is how I think of them: cut the wings off and if you just look at their bodies, they're not that pretty. It's literally a bug."

Bug fears aside, the experience in the sanctuary didn't completely end her love for butterflies that aren't actually flying around her. She's used enough butterfly imagery in the months since the episode for the theory to hold up, even if she's afraid of the creatures IRL.

Fans started to put all these clues together on Twitter, and it all seems to add up.

This fan has seen the hints and thinks that it's clear Jenner will name the baby Mariposa or Butterfly — there are just too many clues for it not to mean something.

This fan suggested the baby could be named "Monarch", a species of butterfly.

Here are more fans who are putting the pieces together:

It's been a major year for Kardashian-Jenner baby news, and Kim Kardashian announced her third baby would be named Chicago West in January. Internet detectives are convinced that Jenner named her daughter Butterfly, Mariposa, or Monarch, and there do seem to be plenty of clues. It's not clear when Jenner will make an official name announcement, but for now these fans are convinced they have it all figured out.