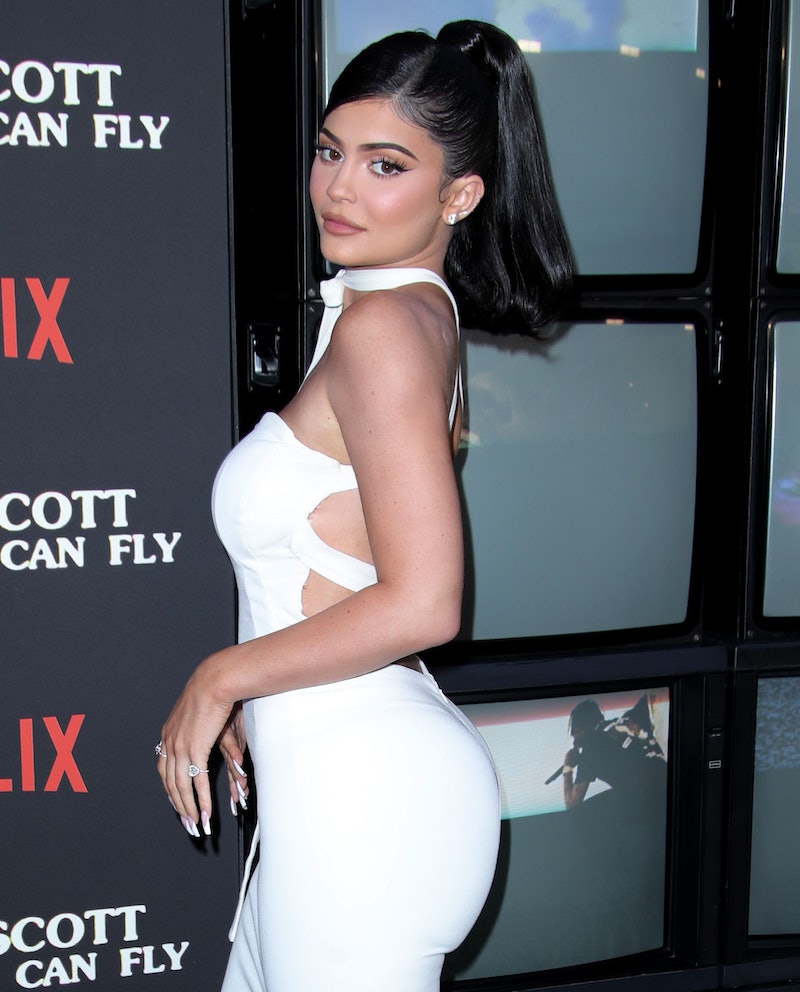 Kylie Jenner is famous for a lot of things. There's her cosmetics brand, her skin care line, her spot-on reality television appearances. But now, she's famous for something else entirely: a meme. And the beauty mogul has embraced her "Rise and Shine" meme so much that she's put it on a sweatshirt.

Not familiar with the "Rise and Shine" meme? Let's recap. Several days ago, Jenner posted a YouTube video touring her Kylie Cosmetics and Kylie Skin offices.

In the video, Jenner explains that her daughter, Stormi, has her own nursery at the offices. The reality stars opens the door to the nursery and sings, "Rise and Shine" to the toddler, and... a meme was born. From remixes online to fellow celebrities jumping on the viral moment, Jenner is taking over the internet in a whole new way, and she's clearly not opposed to it.

On Oct. 17, Jenner took to her Instagram to announce that there are now two official "Rise and Shine" meme sweatshirts available on her Kylie Shop website. Leave it to Jenner to make accidentally becoming a meme into a lucrative business decision.

The black and white sweatshirts are both available now on the Kylie Shop website and retail for $65 each in sizes XS-XXL. Apparently, people really want them since size XS is already sold out in both sweatshirts

Jenner's embrace of the meme isn't totally unexpected, though. For the past few days, she's been participating in the viral moment for herself, and some of her celebrity friends have even joined in on the action.

In a now expired slide on her Instagram stories, Ariana Grande played the clip of Jenner singing, "Rise and shine," and lip-synced the words. In the short clip, Grande added a caption asking if she could sample the song. Obviously, Jenner wasn't going to say no. The progenitor of the meme reposted Grande's original video giving the "Thank U, Next" singer the rights to sample her viral song, but explaining that she'd have to be in the music video.

Team up of the year? Definitely.

Even Miley Cyrus has gotten in on the action reposting a video showing herself as a judge on The Voice and turning around for Jenner as she sings the now infamous line.

There's one person in Jenner's life who doesn't seem to be as much of a fan as everyone else. On Oct. 17, Jenner posted a video of Stormi dancing to a remixed version of the song — then asking for "Daddy" to sing instead of her mom.

It's okay, though, Kylie. The internet still loves you and your song.

How long will these meme last? No one knows, but don't ever say Kylie Jenner isn't a business woman. Turning a meme into a money-making sweatshirt may just be her most brilliant move yet.

More like this
Harry Styles’ Red Carpet Looks Have One Thing In Common
By El Hunt
15% Pledge Director LaToya Williams-Belfort On The Impact Of Supporting Black Business
By Dominique Norman
These Are Kylie Jenner's Best Paris Fashion Week Looks... So Far
By Dominique Norman
Bella Hadid's Flare Jeans Under A Dress Outfit Is So Nostalgic
By Allie Fasanella
Get Even More From Bustle — Sign Up For The Newsletter