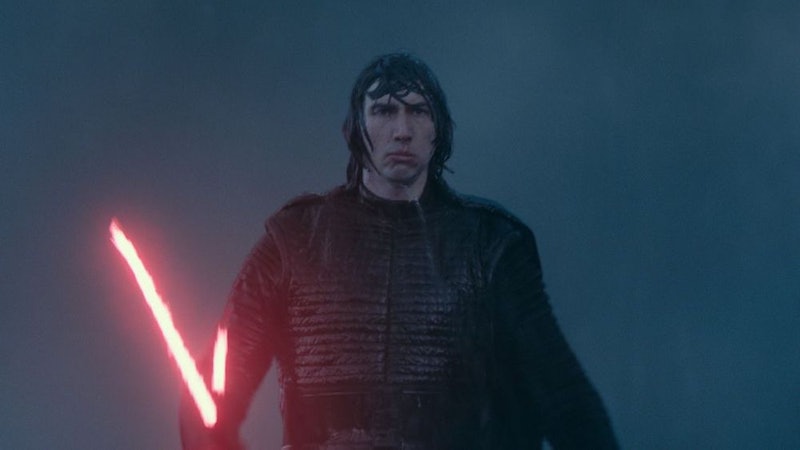 A rain-soaked Kylo Ren is giving the internet all the Jane Austen feels. Twitter has even gone as far to say that Kylo Ren is the Mr. Darcy of the new Rise Of Skywalker trailer. Honestly, looking at Adam Driver in the latest Star Wars Episode 9 teaser, the comparisons to 2005's Pride & Prejudice, starring Keira Knightley and Matthew MacFadyen, are not all that farfetched. In fact, a Twitter user named @_ThanksHermione wondered if Rise Of Skywalker is "space Pride and Prejudice."

It's all thanks to a particular dreamy shot of Kylo Ren at the 45-second mark the new trailer, in which he shows up to confront Rey (Daisy Ridley). His all-black ensemble is dripping wet and Twitter couldn't help but notice that the force of Mr. Darcy is strong with this one. Compare this moment with the proposal scene from 2005's Pride & Prejudice and it's hard not to think Driver would be the perfect Mr. Darcy.

While Kylo Ren, the romantic lead, may sound funny, the similarities between the two characters is actually uncanny. They're both very large men wearing very long cape coats showing up in the rain to propose to a woman whose first impression of him is not all that great. Now, "I love you" might not be the message Kylo Ren is there to give Rey in this trailer, but he does propose a new idea. After Rey says in a voice over that no one really knows her, Kylo tells her "but I do" before the two appear to duke it out. But, let's face it, that might be as close to "I love you" as Kylo can get.

The similarity is so eery, Nerdist's Rachel Heine went as far to add some of Mr. Darcy's best quotes to the Rise Of Skywalker image. "You must allow me to tell you how ardently I admire and love you," she tweeted, along with a GIF of Kylo Ren pulling out his lightsaber.

For many Kylo Ren stans, none of this is all that surprising. After all, the real ones have been making the Kylo Ren and Mr. Darcy comparisons since 2018, pointing out that they are both moody, misunderstood men who will find redemption in the end. Another sign that Star Wars has some Austenesque influences was Eddie Redmayne's 2016 revealing that he read a scene from Pride & Prejudice during his Kylo Ren audition.

It's true, that in this particular trailer, Kylo Ren is rocking a very Mr. Darcy-esque look of piecey bangs and pouty lips. Not to emtion their shared penchant for dramatic coats that are made for walking, whether it's in the moors of England or a galaxy far, far away, which don't look all that different.

Perhaps, their endings won't be all that different either. Maybe Kylo Ren will learn the error of his ways and will leave the dark side to become Ben Solo once again. There are clues throughout the Rise Of The Skywalker trailer that Kylo Ren is not who we think he is, including that shot in which he and Rey seem to be fighting together. But whatever Kylo Ren does in this final Star Wars chapter, he has certainly bewitched us, body and soul.

More like this
Jennifer Coolidge Needs 'Legally Blonde 3' To Happen So She Stops Getting Hot Dog Jokes
By Jake Viswanath
The 'PLL: Original Sin' Creators Say A’s Identity Will Be “Very Clear” By The Season Finale
By Alyssa Lapid
'The Sandman’s Ending Is A Departure From Neil Gaiman’s Comic Book Series
By Kadin Burnett
Gabby & Rachel Reveal How That 'Bachelorette' Rose Ceremony Twist Happened
By Grace Wehniainen
Get Even More From Bustle — Sign Up For The Newsletter