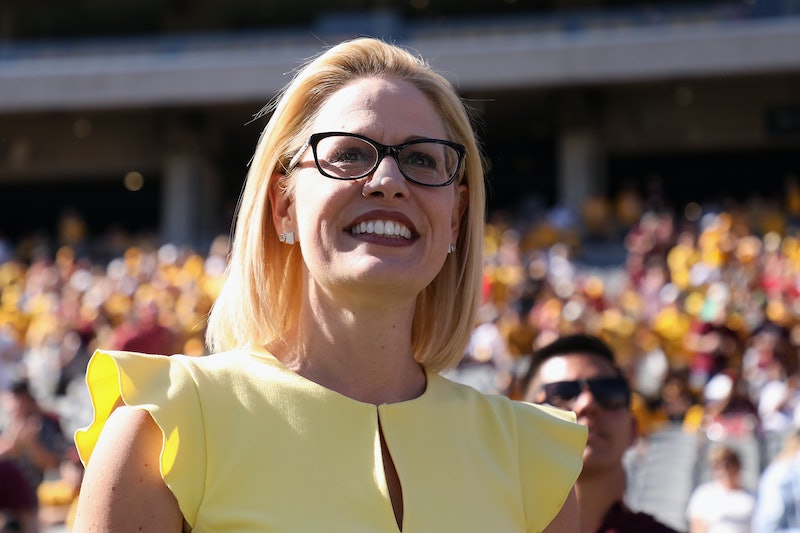 An Alabama state official is receiving pushback for a controversial Facebook post that drew attention to a woman senator's clothing choice. Jim Zeigler, Alabama's state auditor, shared photos of Sen. Kyrsten Sinema that suggested her outfit was inappropriate for the Senate floor, and critics were quick to decry his post as sexist and unfair.

The post, which was still live as of Tuesday afternoon, includes two photos of Sen. Sinema working in the Capitol building. She is wearing a pastel-printed dress and beige over-the-knee boots. In one photo, taken when Sinema was standing on the Senate floor, Alabama Sen. Doug Jones can be seen in the bottom corner, looking in another direction, engaged in something seemingly unrelated to his Arizona colleague.

According to Zeigler, he posted the photo because he is considering running against Jones sometime in the future, and he was conducting opposition research. Bustle has reached out to Sinema and Zeigler for comments.

"Who is that Senator who accompanied new Arizona Senator Krysten Sinema (D) as the senator took the Senate floor?" Zeigler wrote in an edited version of the photo's caption, according to several reports. "No one seemed to notice. You can see him in this photo and others. He represents these out-of-state senators instead of us, the people of Alabama."

The original caption described Sinema as "inappropriately attired," AL.com reported, but while that has since been removed, the text overlay on the image remains. "What newly elected AZ democrat senator Kyrsten Sinema wore to work," it reads, suggesting that campaign strategy wasn't the only thing on Zeigler's mind when he chose to feature Sinema on his page.

Critics took notice. "Sinema, Arizona's first female senator, has been in office not even a month," wrote Laurie Roberts, a columnist for The Arizona Republic. "There are plenty of questions I have about the sort of senator she will be. None of them involve what she wears."

Many of the new comments on Zeigler's post reiterated similar sentiments as of Tuesday afternoon. "You have no right to attack ANY woman and her clothing," one user wrote.

"She looks great and you clearly have issues with women," wrote another.

One commenter also wrote, "Your sexism is coming across loud and clear."

Zeigler said in an interview with AL.com that he had deleted many inappropriate comments on his post, like those that the outlet reported accused Sinema of dressing like a prostitute. But he maintained that the spirit of his post was not inappropriate.

“The wording of my post was Doug Jones does not represent the people of Alabama,” Zeigler told the Alabama news outlet. “He represents the out-of state senators. And I’ll continue to draw that distinction.”

But days after his original post, reactions continued to pour in across social media channels, as well as on unrelated Facebook updates Zeigler shared long after the fact. That the controversy remains on going — and that it happened at all seems to bolster what women in Congress have repeatedly maintained: that although major steps have been made toward gender equality, they are frequently held to different standards than their male colleagues.

"Toxic masculinity," New Hampshire state Rep. Sherry Frost tweeted in response to Zeigler's post. "So what that she’s a duly elected official or that she’s has a Master of Social Work degree AND a J.D. AND a Ph.D. degree in Justice Studies, or that she has years of legislative experience; let’s criticize what she chooses to wear."