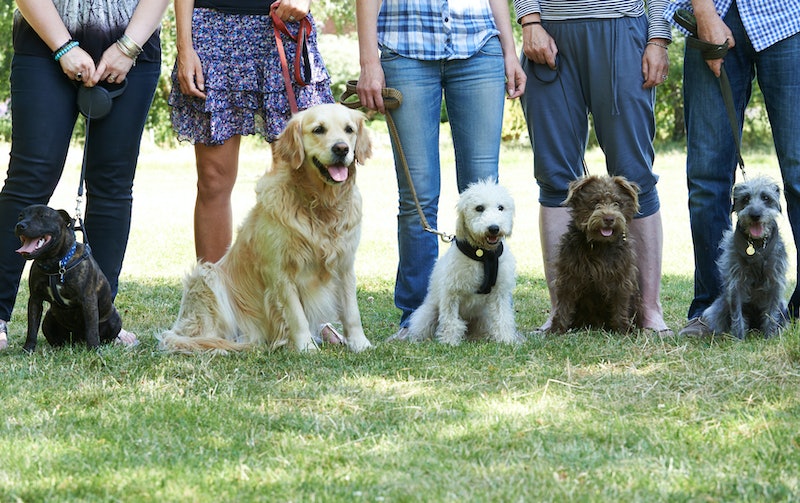 There have been some shake-ups in the dog world, and no, not because of bath time. A ranking of the United States' most popular dog breeds during 2017 was released today by the American Kennel Club (AKC). While the list (released annually) showed more than one mainstay continuing its reign, a number of mixups surprised the canine world as well.

The leader of the pack for the most popular dog in the U.S. is the Labrador Retriever for an unprecedented 27TH YEAR. The German Shepherd's designation also held steady, as the breed claimed the second spot for the second year in a row. The ever-popular, basketball playing pup of your childhood, the Golden Retriever clocked in as the third most popular. Rounding out the top ten in descending order are the French Bulldog, English Bulldog, Beagle, Poodle, Rottweiler, Yorkshire Terrier, and German Shorthair Pointer.

The most noticeable shakeup on the list is the explosion in popularity of the French Bulldog. The breed is featured in the top four for the first time ever, and even knocked the beagle out of its top-five position; one it held for almost two decades.

AKC Executive Secretary Gina DiNardo explained the results of the 2017 ranking of most popular dog breeds are actually not all that surprising. In a segment on ABC's Good Morning America yesterday, DiNardo said she expects the French bulldog is "poised for a takeover,” due in large part to its “adaptability” and “lovable temperament.” She attributes the Labrador Retriever's steady success to similar qualities possessed by the breed, noting too their family-friendly nature.

The AKC told Good Morning America that a number of rare breeds, including Canaans, Harriers, and Skye Terriers, also jumped several spots on the list.

If the name of 130-year old organization rings a bell, you may recognize it from its involvement in events like its annual winter dog show, or conformation. The organization — which is behind the world’s largest not-for-profit all-breed registry — also boasts feats like the largest network of dog rescues n the United States (a total of 450), the AKC Museum of the Dog in St. Louis, and the AKC Library, which possesses one of the largest libraries devoted to dogs in the world. Basically, if you need to know something about pups, these are the people you want to talk to.

Owning a dog is an inarguably rewarding experience. In fact, science suggests there may be a quantifiable, direct link between dog ownership and happiness. According to a student published by the American Psychological Association, there is conclusive evidence to suggest owning a pet not only makes lonely people feel less isolated, but pet owners exhibit higher levels of self-esteem, physical fitness, and conscientiousness. Further, participants in the studies reported feeling equally supported by their pets as they do by family members, and having better relationships with people. This latter finding suggests interacting with animals may equip individuals with better skills to interact with other people.

Conversely, pet ownership — particularly dog ownership — is a big responsibility. Unlike cats, another popular type of furry friend, dogs necessitate high levels of activity and (most) are unable to relieve themselves in a home. Living in an area with open fields and fewer roads may definitely lend itself to being a dog parent, but don't lose all hope if you're in a small apartment. In reality there are plenty of dogs whose needs can be met while living in an apartment. Earlier this week, Dr. Robert Trimble, the Head of Veterinary Services at, and co-founder of Fuzzy, told Bustle, "When choosing a dog, you should think about the kind of owner you will be and choose a dog that fits your lifestyle."

There's definitely a perfect dog out there for you — but if you need some ideas beyond the top five most popular breeds, the AKC can definitely lead you in the right direction.