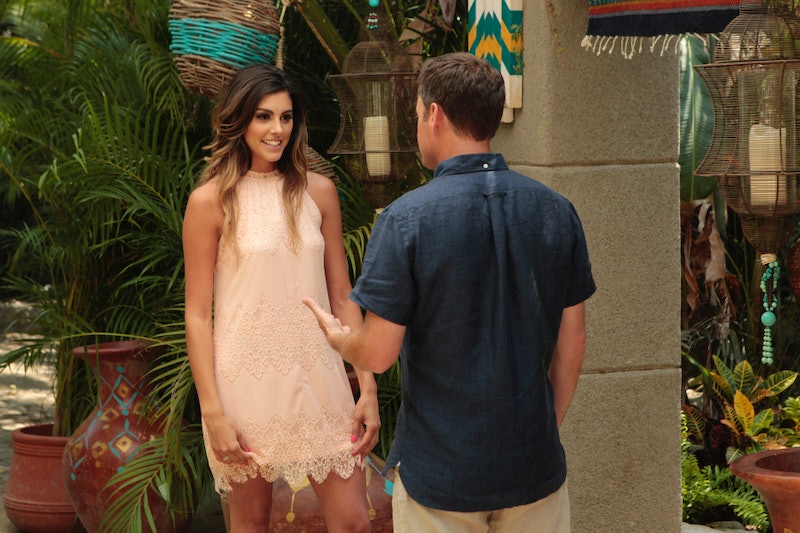 Last summer, Lace Morris got engaged to fellow Bachelor in Paradise Season 3 contestant Grant Kemp — and they even sealed the deal by getting their couple name "Grace" as matching tattoos. But by fall 2016, Lace and Grant broke up and seemed to move on. Former Bachelor contestant Lace has a new boyfriend, showing that she has moved on from her Bachelor in Paradise engagement, according to E! News and the photos on her Instagram account. Lace told E! that her new boyfriend's name is Russell, he's based in Colorado like her, and they met on the dating app Bumble.

"We started talking at the beginning of January very nonchalantly," she said in the interview. "Literally, we were terrible at texting each other and it's weird how it worked out. After about two months, we finally went on our first date after not talking for a couple of weeks and we just immediately hit it off and it's crazy, we've been inseparable since!" Lace hasn't been shy about posting photos with her new love on her popular Instagram account, which is followed by 373,000 followers, but she told E! News that he had asked her not to tag him in the images she posts.

"He's one of those guys where he literally acts like I am the only person that exists in this world and he doesn't care for all the creepers [online]," Lace told E! News. "And he doesn't want to be tagged because he doesn't want a ton of people bothering him or following him, he doesn't like that." But still, the former Bachelor contestant from Ben Higgins' season has been showing off many affectionate photos of herself with Russell at home and around Denver since late March.

Even though Lace has clearly moved on her engagement to Grant, she told E! News that the breakup was hard for her at first. "I literally mourned Grant and I's break up, it was awful," she said. "That was a terrible breakup. We kept it minimal but it was really hard for me. It took me a good two and a half months to really get over it and I finally allowed myself to do it, and lo and behold, I met Russell."

And Lace isn't the only one who has moved on. Grant made headlines for removing his "Grace" tattoo soon after his breakup with Lace. “There were things we were trying to work on that we expected to get better with time, and unfortunately it kind of went the opposite way," Grant told Entertainment Tonight after the split.

As for Lace's own "Grace" tat, she told E! News that she will either remove or edit it — eventually. "I talked to Russell about and I think with time I think I'll definitely eventually get it covered up or edited," she said.

Even though "Grace" is no more, it's great to see Lace happy once again with a new love in her life.

More like this
Where Is Clayton Echard Now? The Former 'Bachelor' Star Is Dating Susie Evans
By Kadin Burnett
Laura Tott From 'First Dates' Married Her Long-Term Mystery Boyfriend
By Darshita Goyal
Indian Matchmaking’s Viral Revealed A Major Clue About Her Relationship With Aashay
By Radhika Menon
'Indian Matchmaking's Pradhyuman & Ashima Have Made No Secret Of Their Marital Status
By Brad Witter
Get Even More From Bustle — Sign Up For The Newsletter