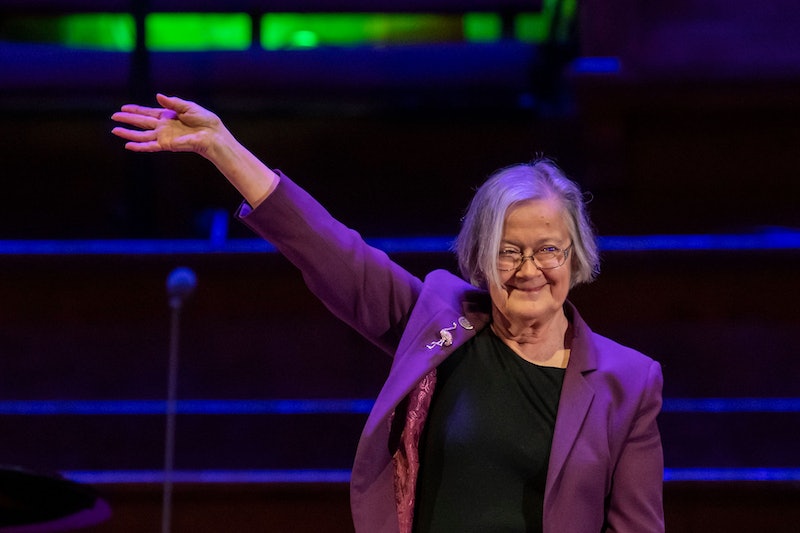 The ruling made today (Sept. 24) by the UK Supreme Court on the will make history. The decision that Boris Johnson's suspension of Parliament was unlawful is almost as groundbreaking as the Justice who delivered it. Lady Hale delivered the Supreme Court's verdict and, with it, may have just become the biggest icon of Brexit. But this isn’t the first time Lady Hale has shook up the British establishment. She’s spent her entire career smashing glass ceilings and paving the way for women and minorities to reach the very top of the law profession. She may be the highest judge in the land but she’s served some serious looks too, as it seems she has a statement brooch for almost every occasion.

Lady Hale, or Brenda Marjorie Hale, Baroness Hale of Richmond as she is known to close friends (lol, jk) is the sitting president of the Supreme Court in the UK. She took up the role in 2017, succeeding Lord Neuberger of Abbotsbury, in a move that changed the face of the predominantly male establishment.

Hale's career journey to the top of the Supreme Court has been anything but conventional. Born in Yorkshire, she was the first student from her school to attend Cambridge. The New Statesman reports that she was only one of only six women in her cohort, compared to 110 men. After leaving university, she worked in academia for 18 years before joining the Law Commission. Lady Hale then worked her way up to the High Court and in October 2017 was appointed to the Supreme Court.

Hale has spent her entire career fighting to make the upper echelons of the law more accessible to women and minorities as, so often, she finds herself to be one of the only women in the room. Speaking to Afua Hirsch in Prospect magazine, Hale explained that one of her battles has been with her fellow judges and their affinity for the Garrick Club, a men-only membership club in the heart of London.

Hale has previously criticised the lack of diversity in the British judiciary, telling the Guardian that the protocol for hiring a judge are is often bias based on the "soundings" of the candidate, resulting in a judiciary that’s "not only mainly male, overwhelmingly white, but also largely the product of a limited range of educational institutions and social backgrounds."

The Supreme Court President's clearly brilliant legal mind, hard-headedness, and integrity have served her well throughout her career, especially in these turbulent Brexit times. I’m not sure anyone could have anticipated that the judiciary and politics would become so intertwined, but, as the question of whether parliament should have voted on Article 50 came before the courts in November 2016, Lady Hale was one of the judges being accused of being “out of touch” and one of the “enemies of the people” by some of the British Press. But in an interview on BBC Radio 5 Live earlier this month, Hale said, “We’re not politicians. Judges have no party political views that they can and should express. We’re neutral on political questions.”

Lady Hale maintained this air of neutrality when she delivered the Supreme Court ruling that Boris Johnson’s suspension of parliament was unlawful. In the verdict, she said, that "the effects on the fundamentals of democracy was extreme” and that there was no justification for such a long prorogation. It was a speech that almost immediately when viral all over news outlets and social media.

However, it wasn’t just what Hale said that sent Twitter into a frenzy. People were also very interested in something they spotted near her right shoulder. The sparkly, spider brooch she was sporting stirred up a lot of talk too, with people beginning to speculate on exactly what Hale meant by wearing it on this occasion.

However, a quick look into her sartorial history and you'll find out that brooches are kind of Lady Hale’s thing. Legal Cheek has highlighted she’s been seen wearing a range of frog brooches, a centipede brooch, a gingerbread man brooch, and even a silver fire brooch, to name a few. While I’m not sure there’s any meaning behind the spider brooch, there’s no denying she can definitely shake up proceedings with statement jewellery from behind the stand.

Upon Hale's appointment to the Supreme Court, Afua Hirsch wrote that she "could shake up not just the [Supreme Court], but the country." And today's ruling was evidence of exactly that.