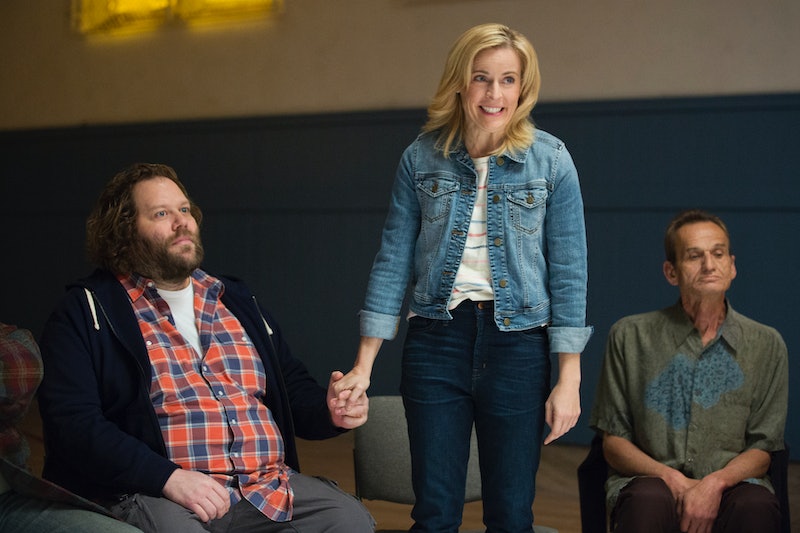 In the first season of the comedian Maria Bamford’s semi-autobiographical comedy Lady Dynamite, there’s one moment where I felt a deep pang of recognition. After a chance encounter with the handsome Graham (played by Dean Cain, no less) at her own open house, our hero Maria begins dating him. The problem? His credit score isn’t approved to purchase her home, and since they’re newly dating, she makes the ill-advised decision to ask him to move in with her. “God, you’re so strong,” Graham says admiringly after he accepts her generosity. Cut to Maria, huddled over in the shower, screaming into a sponge.

Lady Dynamite features Bamford playing a fictionalized version of herself, so not all of that scene is a true story. But it’s a scene that perfectly encapsulates the show’s depiction of the ways one can crumble under the stress of mental illness. “I'm not a very screamer-type person, but when I was feeling so bad during that time, I had a couple episodes where it's like I had to scream. So I'd scream into a pillow or something,” Bamford says, referencing her own struggles with Bipolar II Disorder. However, as funny as the running screaming gag was, it’s not something you’ll see in the newly released season two, now available on Netflix, because the character — like Bamford in real life — is “presumably well medicated.”

The show’s skillful blurring of the lines between Bamford’s real life and her life as created by a writers room, coupled with its nuanced depiction of mental illness, is what makes Lady Dynamite one of the most interesting and inventive shows currently airing on television. It’s a hilarious, surreal portrait of a woman trying to recover — complete with shifting timelines, L.A. comedy scene in-jokes, and all the talking pugs you could need — and one that so closely resembles Bamford’s life and mental breakdown yet doesn’t all at the same time.

A long beloved stand-up comedian, Bamford has never shied away from honestly talking about her lifelong mental health issues. But in 2011, when things were going well for her professionally, the death of her dog Blossom caused things to fall apart. In a span of 18 months, she did three different stints in the psych ward to keep herself from committing suicide. She was eventually diagnosed with Bipolar II.

Season One of Lady Dynamite, which premiered in May 2016 on Netflix, touches on Bamford’s institutionalization, but doing so wasn’t necessarily cathartic for the comedian. “It's still so funny that doing a show about a mental breakdown [...] is probably the fastest way you can get to a mental breakdown,” Bamford says. Still, for a comedian who mentions she “definitely, on some level, prefers playing a character,” fictionalizing her life has helped Bamford tell stories that can feel universal while being intensely personal. While she’s involved a bit in the writers room, giving them ideas for jokes and telling them things about her life all while eating a salad — Bamford is not a full-blown writer for the show, and that’s what she prefers.

“It isn't totally me, and that's OK,” she says of Maria on Lady Dynamite. “I can be a part of a group effort to make a delightful story and it doesn't have to be exactly me, although they do a great job of getting my voice and my point of view across, which is lovely. Also I just don't have the energy to do it,” she admits.

While Lady Dynamite certainly has more than its fair share of heavy storylines, as we see in its depictions of Maria’s breakdown, hospitalization, and recovery, one of the funniest things that balances out the heaviness is Bamford’s affinity towards animals. That includes both the pugs that she owns (Burt and Blueberry, RIP Blossom) who constantly give her advice, to a cavalcade of other animals who cross her path, like raccoons and goats, who are also seemingly therapeutic in both her real and fictional lives.

Like a true animal lover, once we bring up the topic of animals, Bamford’s mind instantly wanders to musing about how her furry friends are cared for on set. “The guinea pig is given so much respect,” Bamford says, going on to mimic a dutiful animal handler. “‘Oh, the guinea pig needs to sit down. Close the cage so he doesn't have to see anything and get anxious or triggered.’" One of the things that’s obvious talking with Bamford is her seemingly endless compassion for everything and everyone. After discussing the high-class treatment of the animals on the Lady Dynamite set, she begins worrying about the extras.

“The poor extras are there 17 hours, dehydrated in a dark hallway. I feel terrible,” she laments. Bamford’s own experience as an extra makes her familiar with the struggle, and she’s especially sympathetic given her husband’s hectic experience as an extra on the set of Lady Dynamite. “It just is heartbreaking to me,” she says. “I'm not sure how to fix it.”

Even if she doesn’t have the answers just yet, knowing the passion that Bamford has put into her work destigmatizing mental illness, it’s easy to imagine her leading hordes of extras into unionizing. Hell, it’s easy to see Bamford, in all her “high, squeaky, insecure” voiced glory, saving the goddamn world. And for many, Bamford already has.

With Season One of Lady Dynamite, Bamford gave voice to so many with her fictionalized depiction of her mental breakdown and subsequent bipolar diagnosis. She mentions that she’s received so much support (but not so much that it’s overwhelming) for the show's depiction of mental illness. It’s been just enough, she says, that she’s gotten some free bottles of water. “It's really been very heartening and helps me feel sort of useful,” Bamford says. “People have said that it's helped them feel less alone, and that's really wonderful and helps me feel less alone because all the other people are coming up to me. It's wonderful.”

While Bamford might not acknowledge it, her comedy and work on Lady Dynamite is helping change the world, one person at a time. So what would be next in Maria Bamford’s hierarchy of things to change in the world? “Extras, number one. Well, things that I might have any access to,” she suggests. Her brilliant, hilarious brain can already see how to address the work conditions for extras on Lady Dynamite: “Oh my gosh,” she adds. “If there is a third season, one of the episodes will be the extras rising up and taking over the show.” As long as an uprising doesn't cause Maria to return to screaming into sponges, we'll consider it a success.