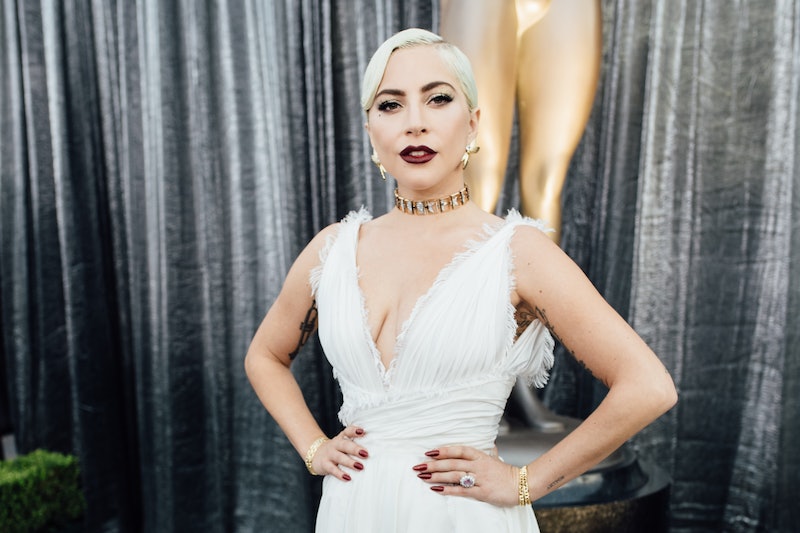 Look out, Little Monsters — this singer might have a new man in her life. After circulating rumors about the pair, Lady Gaga and Dan Horton's recent date night has fans convinced the two are officially a couple. On Saturday, Gaga posted a romantic dinner photo on her Instagram Story, according to Us Weekly. The picture — which showed off a multiple-course meal, white wine, flowers, and ambient candle lighting — certainly looked too intimate for a night shared between friends.

Gaga didn't seem to be hiding that she was dining with her rumored beau either. She tagged Horton in the Instagram Story, writing, "The @dhortonaudio special" with a string of heart emojis. Horton, is a sound engineer, met Gaga while working on the Enigma Las Vegas residency, according to People. The couple were first romantically linked in July, after reportedly being spotted kissing during a brunch date at Granville in Los Angeles. (Bustle reached out to Gaga's rep regarding the dating rumors, but did not receive an immediate response.)

The Star Is Born actor has yet to officially confirm the relationship, but her dinner with Horton marks the second weekend in a row that they've spent together. On Aug. 31, Gaga and Horton attended a The Cure concert, and the two were spotted dancing and kissing by fans throughout the evening, as per Us Weekly. The two reportedly sat on the patio and appeared deep in conversation. They didn't seem shy about hiding PDA from onlookers, per People. "They were kissing as they spoke really close up," an anonymous source told the publication. "She seemed very happy when interacting with the guy she was with."

On Twitter, several fans reacted to the singer's dinner date with Horton with their approval. As one person wrote, "Gaga letting everyone know Dan is her man like that wasn't news already," while another said, "Gaga is too cute with Dan on Instagram @ladygaga U deserve to be happy & in love." As long as Gaga is happen, her fans are, too.

While Gaga posted photos from the Cure show on her Instagram Story, the "Shallow" singer did not mention Horton's presence at all in the accompanying caption. That makes their dinner her first official acknowledgement that the two are spending time together.

Back in February, Gaga broke off her engagement with Christian Carino, as per People. The split was reportedly drama-free, with an unnamed source telling the publication, "It just didn’t work out. Relationships sometimes end. There’s no long dramatic story." In June, Gaga acknowledged the split with Carino for the first time during one of her Vegas residency shows. According to E! News, the singer told the audience, "Last time I sang this song, I had a ring on my finger, so it'll be different this time," before singing "Someone to Watch Over Me" by Ella Fitzgerald. Gaga's comment hinted she was moving forward.

It's not yet clear if the rumored couple is super serious, but following their concert date, an anonymous source told E! News that Gaga is enjoying Horton's company. "Lady Gaga is smitten with Dan. She definitely want to take it slow but she's been having feelings for him and really likes him," the unnamed source said. "They're cute and comfortable together and he makes her laugh a lot."

That means fans may not have to wait for Gaga and Horton to officially confirm dating rumors, as it doesn't seem like the singer intends to keep the potential romance a secret for much longer.