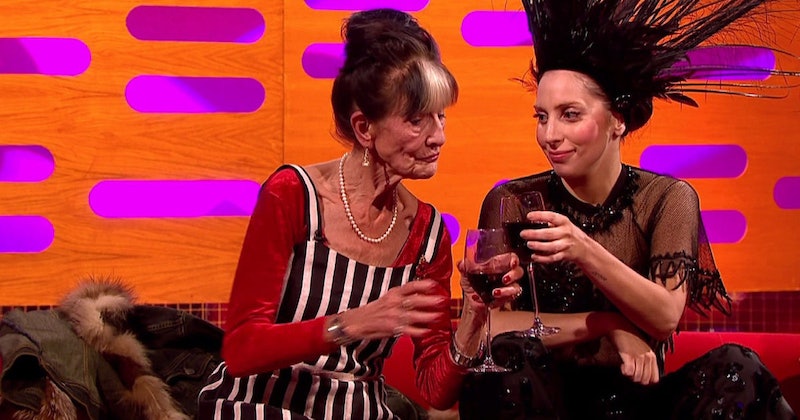 Talk show hosts get all the LOLs. All that glamour and getting to see behind the veil of celebrities' lives. Even better still, getting to unite some household names and potentially spark some unexpected relationships. People seem to hit it off on chat shows, but this particular union of two uber amazing and powerful women, Lady Gaga and June Brown, bridges some serious divides. Like say the Atlantic Ocean and approximately 60 years? Yep, Lady Gaga asked June Brown to a nightclub and I am shook.

In an interview with the Daily Star, spilled some of the gossip about what happened when the stars met on The Graham Norton Show. The pair got on famously (for want of a better word) and their banter on the show included a heck of a lot of mutual appreciation as well as sharing large glasses of red wine. Now that is my kind of a night.

However, it seems like things between the pair really got lit after the show. "She was so funny, intelligent and down to earth, but when she went in front of the press, you could see her put the Gaga persona on. She saw me sitting on my own and came back, dropped the whole Gaga thing and invited me to a nightclub," Brown explained.

I contacted Brown's reps who confirmed the story and revealed that Gaga asked Brown to join her in the club the night following The Graham Norton Show.

OMG could you actually imagine? I am not sure which end of the equation I am more jealous of. Like being able to ask Brown out on the town or having Gaga ask you to the clurb. And how did she react? Cool as a cucumber. "Sadly I couldn't make it, but I thought what a charming and talented girl," Brown told the Daily Star.

Brown's reps told me that Brown was actually recording Piers Morgan Life Stories the following evening and had to decline the invite.Imagine being cool enough to turn Gaga down. Swoon. Brown is an icon to all women for so many reasons. Not only is she bossing her 90s but her career has been impressive AF.

She's best-known of course for her role as the beloved Dot Cotton who has been an on-off resident of Eastenders' Albert Square since 1985, as The Guardian reports. She's become an icon not only for her never changing nana-chic style, but for running the laundrette in a neighbourhood where strangely nobody seems to own a washing machine.

So what's the secret behind the zest for life that's enabled her to keep working into her 90s? Speaking to the Mirror, Brown explained she isn't too hard on herself.

"I'm going to die of something fairly soon, so why not enjoy myself?" she told the publication. "I love red wine and also dark chocolate. And the Guinness helps me keep a bit of weight on. So I don't need to be careful about what I eat or drink. What's the point of counting how many cigarettes I smoke a day? I've been on them for over 70 years. I did try one of those new electronic cigarettes, but it was so heavy it kept falling out of my mouth — so that went in the bin".

TBH I reckon it's that care-free attitude that keeps her youthful and fun and full of beans. Good on her and you know what? You have to be seriously cool to turn down a mega star's request to go out partying. All hail June Brown.