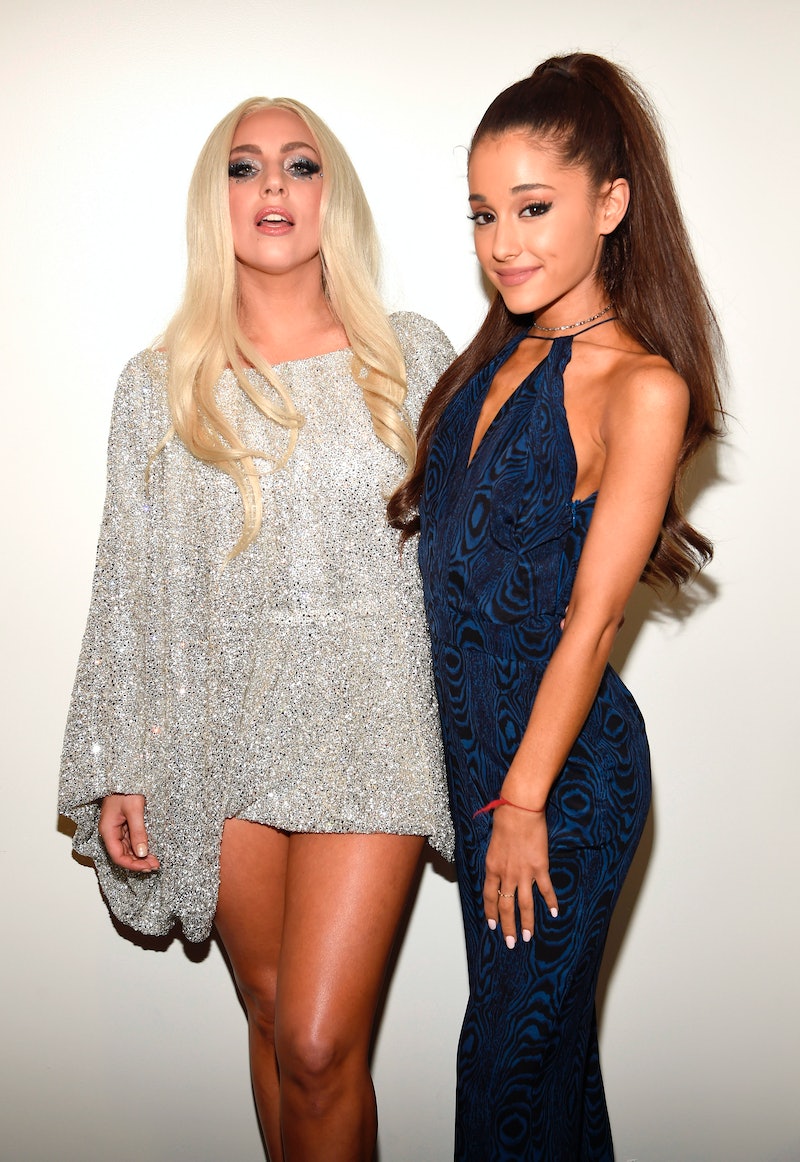 Weather forecasts across the country are predicting rain all weekend, and it's not just mother nature's doing — Lady Gaga and Ariana Grande are about to make it rain on all of us with their new single, "Rain On Me." Lady Gaga opened up about collaborating with Ariana Grande on the track, which serves as the second single off her new album Chromatica. As Gaga told Zane Lowe during an in-depth interview on Beats 1, the duo ended up forming a strong bond after an emotional collaborative process.

The "Stupid Love" singer described their experience in the studio, saying that she first asked Grande what she needed to feel comfortable — then promptly told her to forget everything she knew about recording and just sing. "By the way, while you're doing that, I'm going to dance in front of you," she recalled telling Grande. "She was like, 'Oh my God. Oh my God, I can't, I can't. I don't know. Oh my God. OK, OK.'" What resulted, according to the pop star, was something that will surprise fans. "And then I did it and she sang, and she started to do things with her voice that was different. And it was the joy of two artists going, 'I see you.'"

While making Chromatica, Gaga revealed, she was dealing with her previous traumas head-on through creating music, including her alleged sexual assault by a music producer. She explained that she and Grande bonded over their respective traumas — in fact, the day "Rain On Me" is set for release, May 22, will also mark the third anniversary of the Manchester terrorist attack at Grande's concert.

But it was the "No Tears Left to Cry" singer that was drying Gaga's tears in the studio, leading her to initially feel insecure about working with her. "She was like, 'You're going to be OK. Call me, here's my number,'" Gaga said of Grande. "She would try over and over again to be friends with me. And I was too ashamed to hang out with her because I didn't want to project all of this negativity onto something that was healing and so beautiful. And eventually she called me on my sh*t. She [said], 'You're hiding.' And I was, and then this friendship blossomed."

Evidently, they're still going strong. In anticipation of the release of "Rain On Me" tonight, the newfound friends are sharing sweet notes on Twitter. "Love u @ArianaGrande let’s do this," Gaga tweeted. "Nothing can stop us, we know that now." Grande quickly responded with encouraging words. "Love u so much more," she wrote. "Nothing could stop us before either, we just had to realize it! I’m so excited. Thank u. I’m ready." So is the rest of the world.

More like this
The 12 Most Controversial & Unexpected Grammy Moments Ever
By Jake Viswanath
9 Photos Of Celebrity Couples & Unexpected Duos At The 2023 Grammys
By Jake Viswanath
The History Of Taylor Swift's "All Too Well" & What The Lyrics Actually Mean
By Jake Viswanath
Meghan Trainor & Daryl Sabara Are Expecting Their Second Baby
By Jake Viswanath
Get Even More From Bustle — Sign Up For The Newsletter
From hair trends to relationship advice, our daily newsletter has everything you need to sound like a person who’s on TikTok, even if you aren’t.